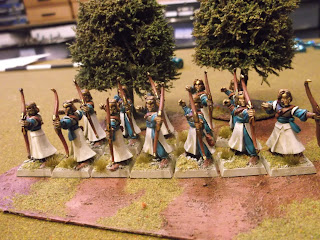 The second Elf turn just involved getting rid of some fatigue and a failed healing spell, while they stocked up their BB again. 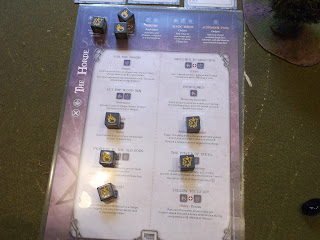 Turn three, the Goblins had a lot of fatigue, too, and mostly rested, except the warlord charged the stubborn tree and finally uprooted it. It still cost a lot of fatigue and the warlord was left in the middle of the battlefield without much help. Normally that would be bad, but without Bodyguard and We Obey, the Warlord is really just another unit. 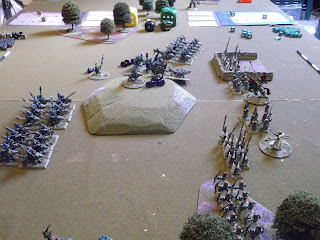 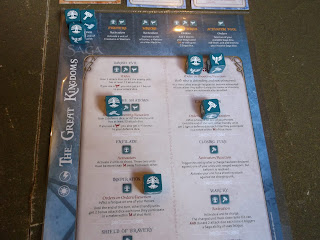 The Elves had a nice full board, and also got a decent roll with their Bolt spell. Risking an Abuse of Power roll, the Sorceror unleashed a Maximum power Bolt on the Goblin Warlord and killed him. The AoP roll got a 'no effect,' too. 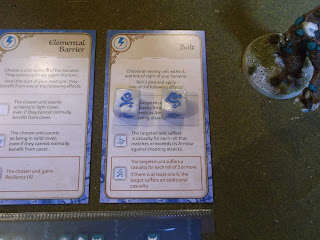 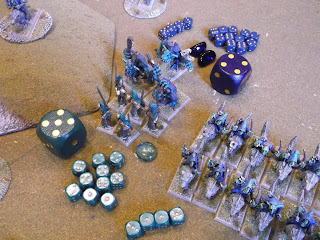 The Elves also moved their hearthguard forward to take out the trolls. This was another big fight with lots of abilities thrown in, but again, not much happened. Both sides have a nice Defence Dice boost ability, where they can get four (or more) dice. This makes it difficult to force a decisive combat. 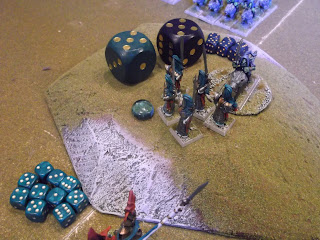 Then we had a fight for the top of the hill. The other hearthguard unit tried to budge the Goblin Champion, but were repulsed. But the Elf warlord finished the job. 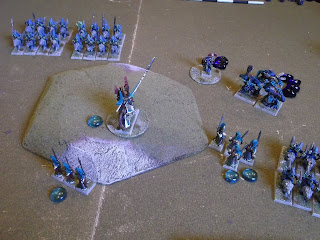 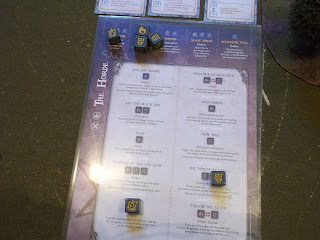 On the Goblins' fourth turn, they mostly just sloughed some fatigue getting ready for an assault on the Elf warlord, except the trolls on the right had another go at the Paladin, and finally managed to slay him. 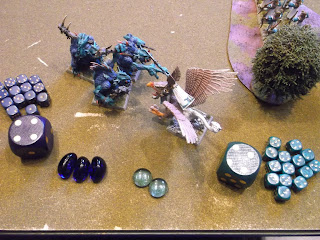 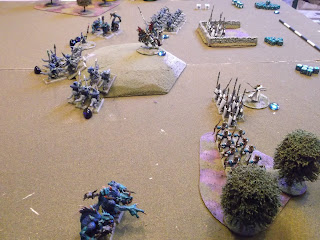 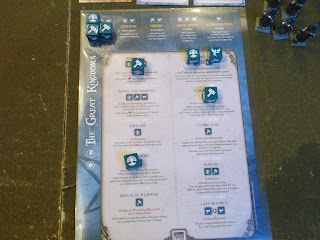 And the Elves went back to getting rid of fatigue and biding their time. They were using most of their abilities to defend against the Goblin attacks, which kept things quite tight, but meant not much was happening on the Elf turns. 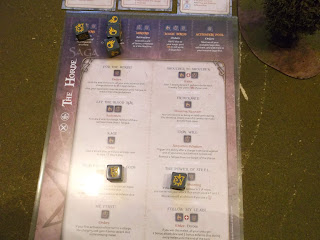 On the Goblin fifth turn, the Elf warlord was sat in the middle of the field without much protection. The two Goblin wolfrider units charged him, but he withstood them, at the loss of a unit of bodyguards. 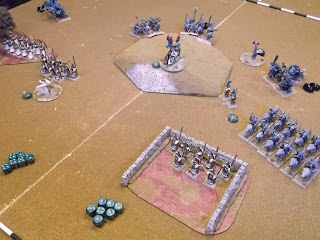 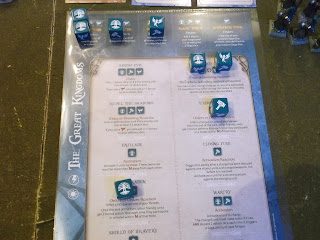 The Elves decided to regroup and formed a defensive line with the heroes behind. They got rid of nearly all their fatigue and waited for the Goblins' final onslaught. 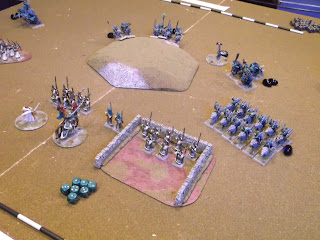 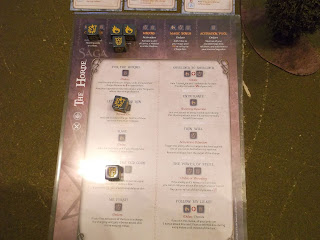 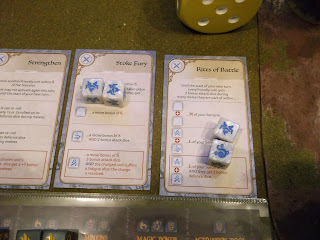 I was having trouble getting enough warrior activations to get all my Goblins moving, so used the double charge activation ability, 'Let the Blood Run' to try to get rid of the final two Elf hearthguard. Unfortunately, the first charge did the job, and so, obliged to make a charge, the second unit of three wolfriders had no choice but to light brigade it towards a full strength unit of warriors, getting wiped out. 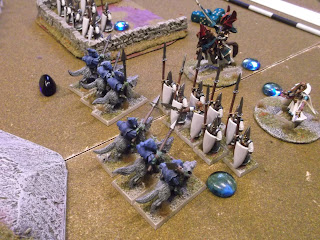 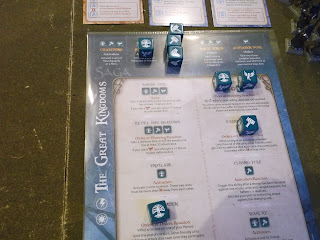 So coming up to the final turn, we had a quick count of the Massacre Points, and the Goblins were about 4 points ahead. The  Elves gave their levies three activations to see if they could just shoot up the troll unit, and then got ready to finish off the last three wolfriders. As it happened, the Goblins had their Prayers to the Old Gods ability still hanging, which they used to get enough Defence Dice to survive the attack.

But three volleys from the archers were enough to destroy the unit of exhausted trolls, and get enough points to edge the game. Though by the rules of the scenario, you need three more Massacre Points than your opponent to win, so it ended in an official draw. 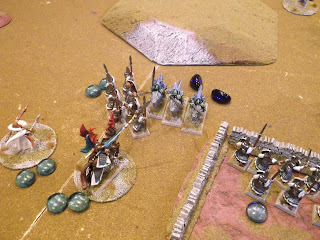 It was fun and I look forward to more Saga AoM. I feel that fantasy and Saga is a perfect fit. I will definitely change my Goblin warband. Having no We Obey was a drag, and a warband full of Warriors and Creatures, which use the same activation dice, made activating them all even more difficult. I will go back to a more tradition Warlord and get some hearthguard in, probably.

For some reason the AoM Battle Boards feel a bit simpler than the historical ones. They don't seem to have many abilities that interact, and using those two boards, at least, felt a lot more straight-forward than many of the historical boards I use. I wonder whether that is because they have a more generic purpose, and the designers had a less specific vision of how they should play.

During the game I was feeling the Resilience (2), Imposing (4 fatigue) units were very powerful and difficult to shift. When supported by decent defensive abilities they were withstanding massive punishment. But the archers, at the end, proved that they can be extremely fragile, once you get them exhausted.

Have to say, I much prefer the flexibility you get being able to swap out half-units for other figures. I feel like Saga generally would benefit from similar flexibility. As nice as the very simple army building is in Saga, just that extra bit of granularity would lead to a lot more possible hearthguard/ warrior/ levy balances.

Anyway, it seems like a great game and I can't wait to play it again.