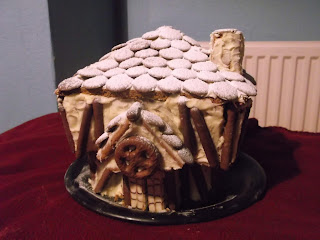 Well, this year's attempt at a gingerbread house went a bit awry. It collapsed once while I was making it, and I don't fancy its chances of making it to Christmas day (edit: It didn't). I feel like I have refuted the use of gingerbread and chocolate fingers as viable building materials historically, so that's something.

Posted by Monkeylite at 08:37 No comments: 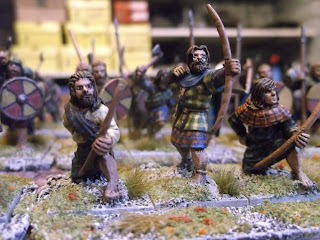 I've had the Dux Bellorum rules for a number of years and always wanted to try them out. It was a relief to my tartan-fatigue that half way through getting my Saga warbands up together, I realised I had finished just enough to make up a full-size DB army. I have also been painting more Anglo-danes to make up a levy-heavy Anglo-saxon warband, so they had some ready opponents. The period covered by DB 367-793 is probably a bit early for my figs, but they're close enough for me. 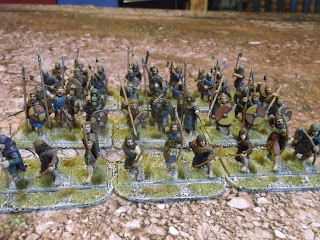 This is nearly all my tartan army, and with three cavalry I quickly painted, gives a 30 point Pictish DB force. The basic scenario calls for 32 points, but you can also buy Leadership Points, which is the main currency of DB, so I bought an extra LP with the spare 2 pts. 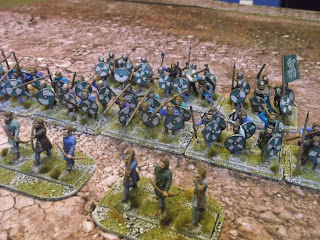 My original Anglo-dane warband had a load of different coloured shields but I was never that happy with the effect so I'm repainting them all in the two-colour scheme above. I managed to get this Saxon army out of them. 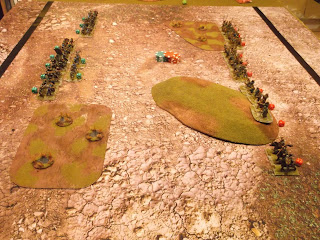 So this would be, what I presume is, the classic DB match-up of Warrior army versus Shieldwall army. The Saxons were nominated as the Aggressor, which means they get to go first in certain phases of the game like movement and nominating attacks and second in others, like placing LPs. The various advantages and disadvantages of this are presumably intended to cancel each other out; the aggressor gets the advantage of being able to react to LP placement.

The repeller also gets to set the terrain in this scenario, using a hill and two bits of boggy ground. The warrior types in the Pictish army have the advantage of being able to move normal speed over the bogs, which the shieldwall types do not. 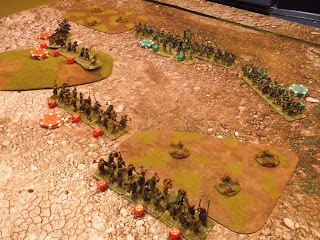 The key tactical element of DB is leadership points (poker chips, here). You place them on each unit (or group) at the start of a turn. You can cash them in for a variety of bonuses as the turn progresses: ignoring shooting hits, mitigating failed movement (bravery) rolls, interrupting enemy movement, bringing bonus attack dice, ignoring melee hits, mitigating failed morale checks. 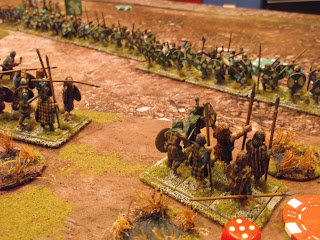 Combat between two units is pretty straight forward, using an Aggression number of dice to equal your opponent's Protection score, to whittle down their Cohesion. But on our first game we played a big melee involving a number of units. This felt a bit complex: you have to nominate all the attacks and LPs for a before any are resolved, and because it's all simultaneous, you can't really play any retreats, etc, until the entire melee is resolved. For a big combat area, say five units against five, this might start to get unwieldy. But, I'm expecting this to get a bit more intuitive to keep track of after playing a few games.

Each unit needs to keep track of its Cohesion. I was placing a dice alongside each one, but this wasn't entirely satisfactory. I feel like a dice-holder incorporated into each movement tray would be a better solution.

I really like all the LP-based tactical options. I'll be playing a proper game tomorrow and will see how that goes. 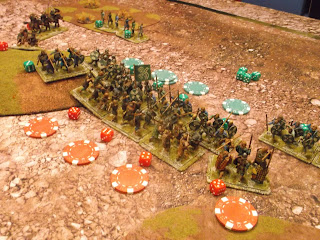 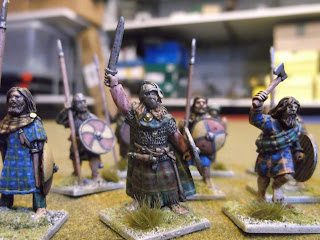 More bloomin' tartan. I went through a bit of an unproductive phase as this was getting heavy going. I'd been doing the tartan in batches, like I do most other troop types. But then discovered the way to do them much more quickly, unlike other figures, is to do one single figure from start to finish. 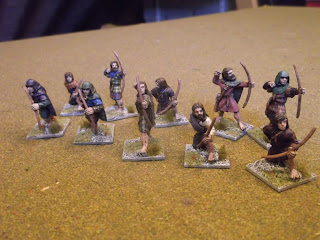 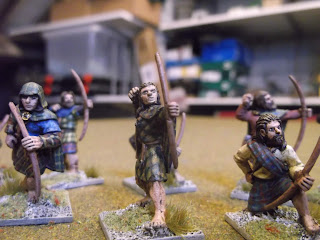 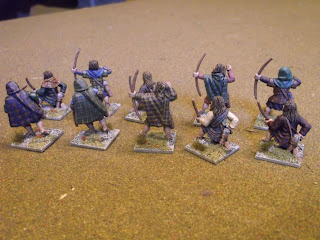 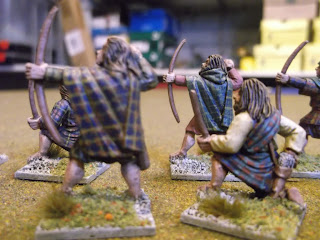 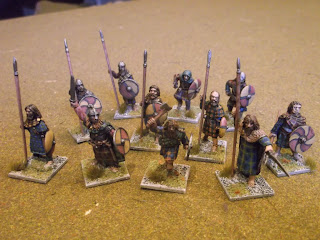 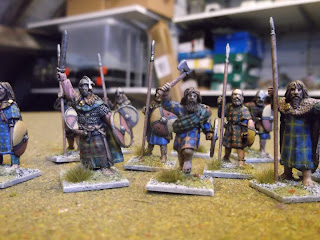 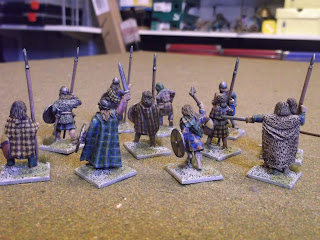 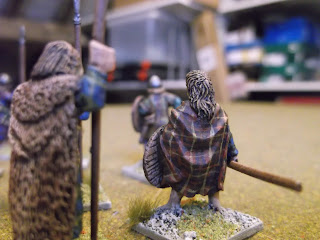 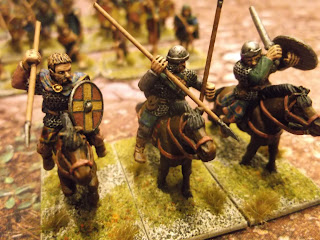 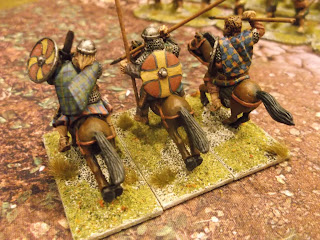 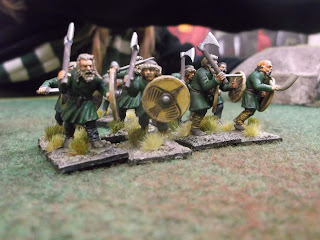 The latest Bristol Independent Gaming Saga tournament was for historical warbands, instead of the usual AoM. Three Norman armies turned up, and there were Vikings, Anglo-Saxons, Anglo-Danes, and some more I can't remember, while I took my Moors.

Had another fun time, losing to Tom's Normans in the first game. Not much went wrong, but not much went right, either, and while the ending was quite close, I was always playing catch-up.

Next I played Dan's Anglo-Saxons. This might be the bloodiest game I've ever played. My archers were left unscathed (because they kept out of the way) but every other unit on the table was decimated. Special mention should go to the law of averages, as Dan failed 12 shooting saves in a row (50-50 chance of each one).

The final game was another close one and I just managed to beat Chris' Vikings. This one was remarkable for although we slogged it out right from the off, fighting for the sheep  objective in the middle of the table, not a single objective point was won. So, we declared the sheep the winner. 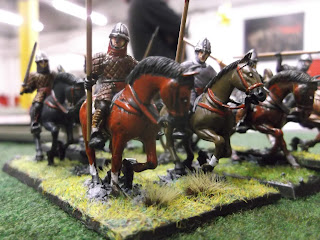 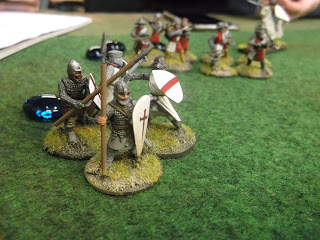 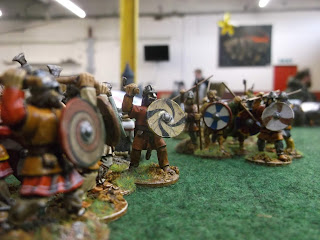 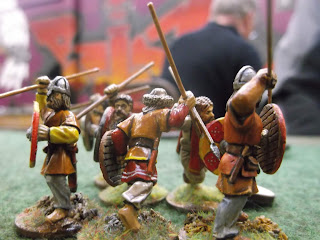 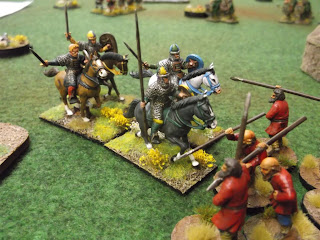 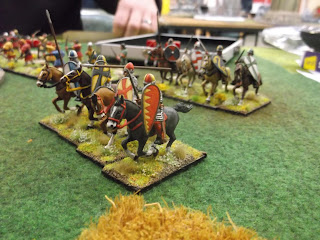 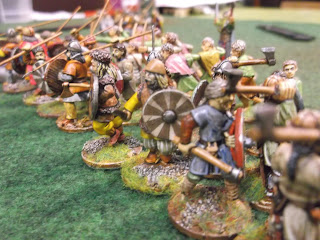 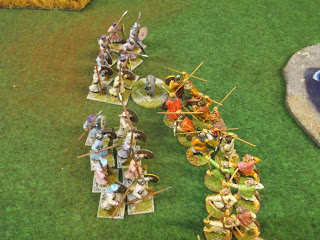 Posted by Monkeylite at 07:00 No comments: