So we played our second game of Lion Rampant, with Bret and Goblin models. Substituting the goblins was easy enough, and it mostly felt ok. We played Trolls as Foot Men-at-Arms where Black Orcs would have probably been better. We talked about sticking a few simple rules on top to make the game more fantasy/magical.

As a sucker for novelty dice, I couldn't resist buying some Lion Rampant dice. And after my rolling in our first game, where my forces barely moved, except to retreat, I felt I needed them. We also used chips to mark units that have activated (green), are battered (red), and other (orange). 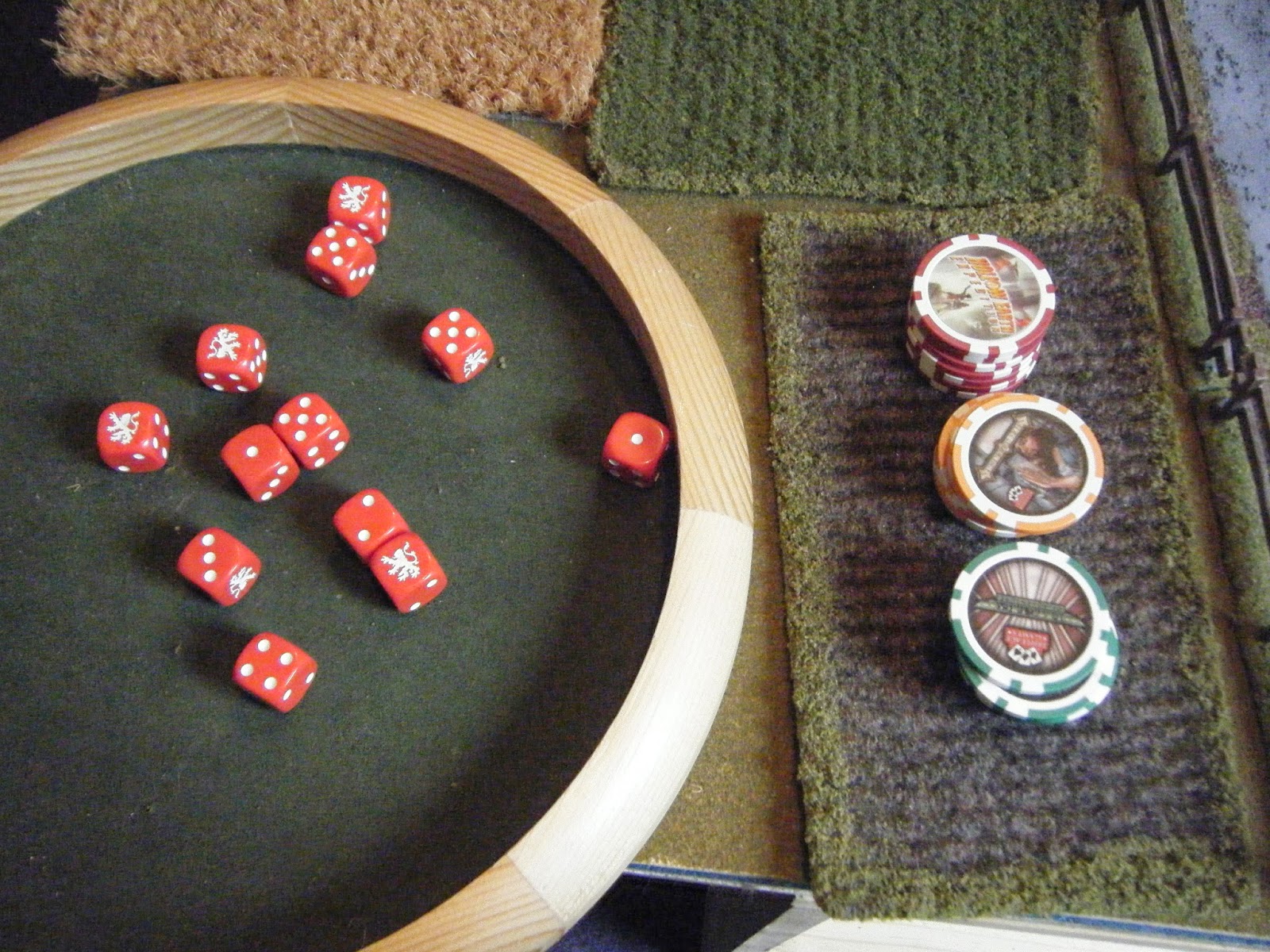 The goblins lined up one side of the river and the Brets the other. We didn't bother with boasts, glory, or detailed victory conditions, and just decided that the side to take the ford would win. 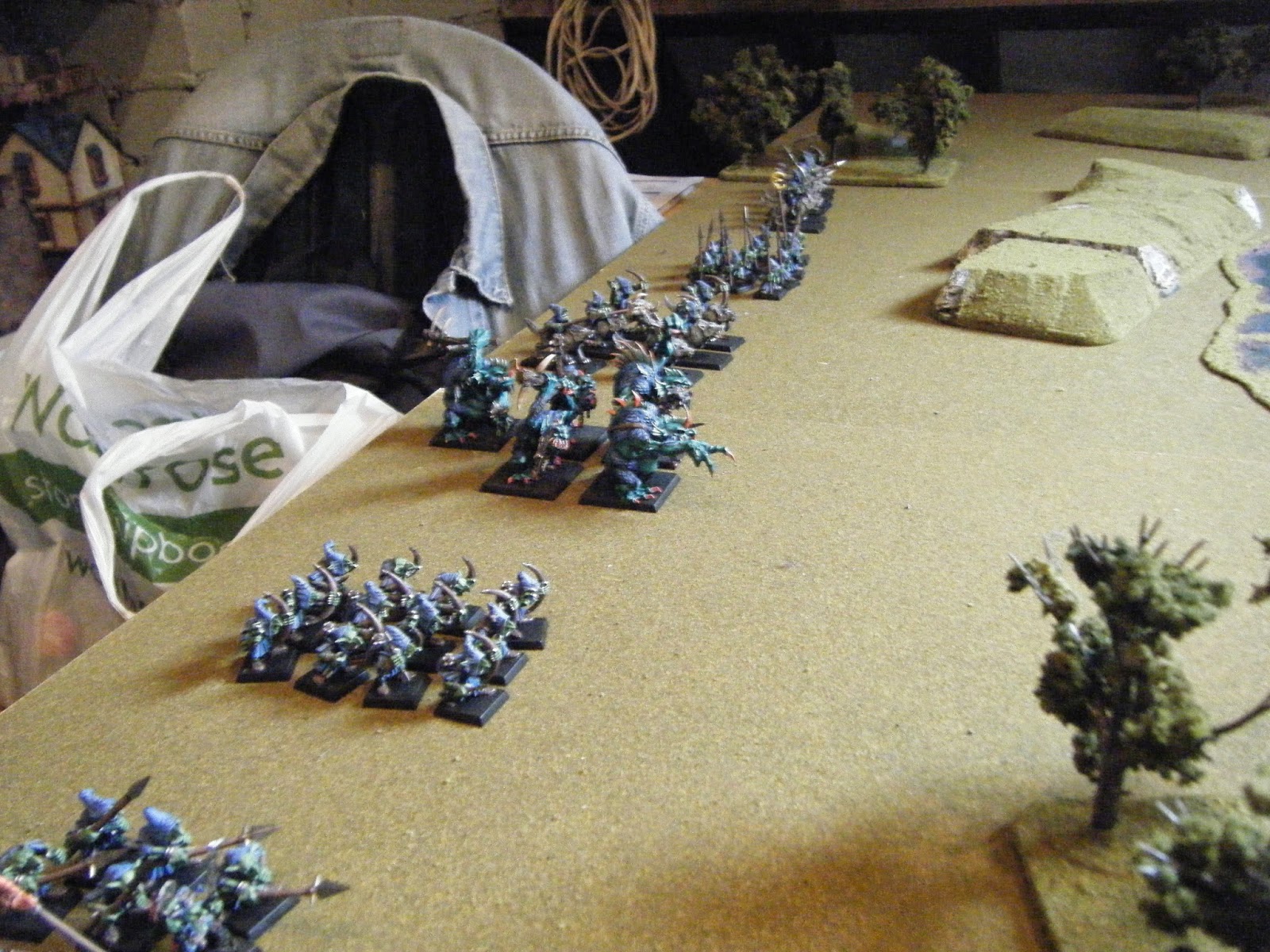 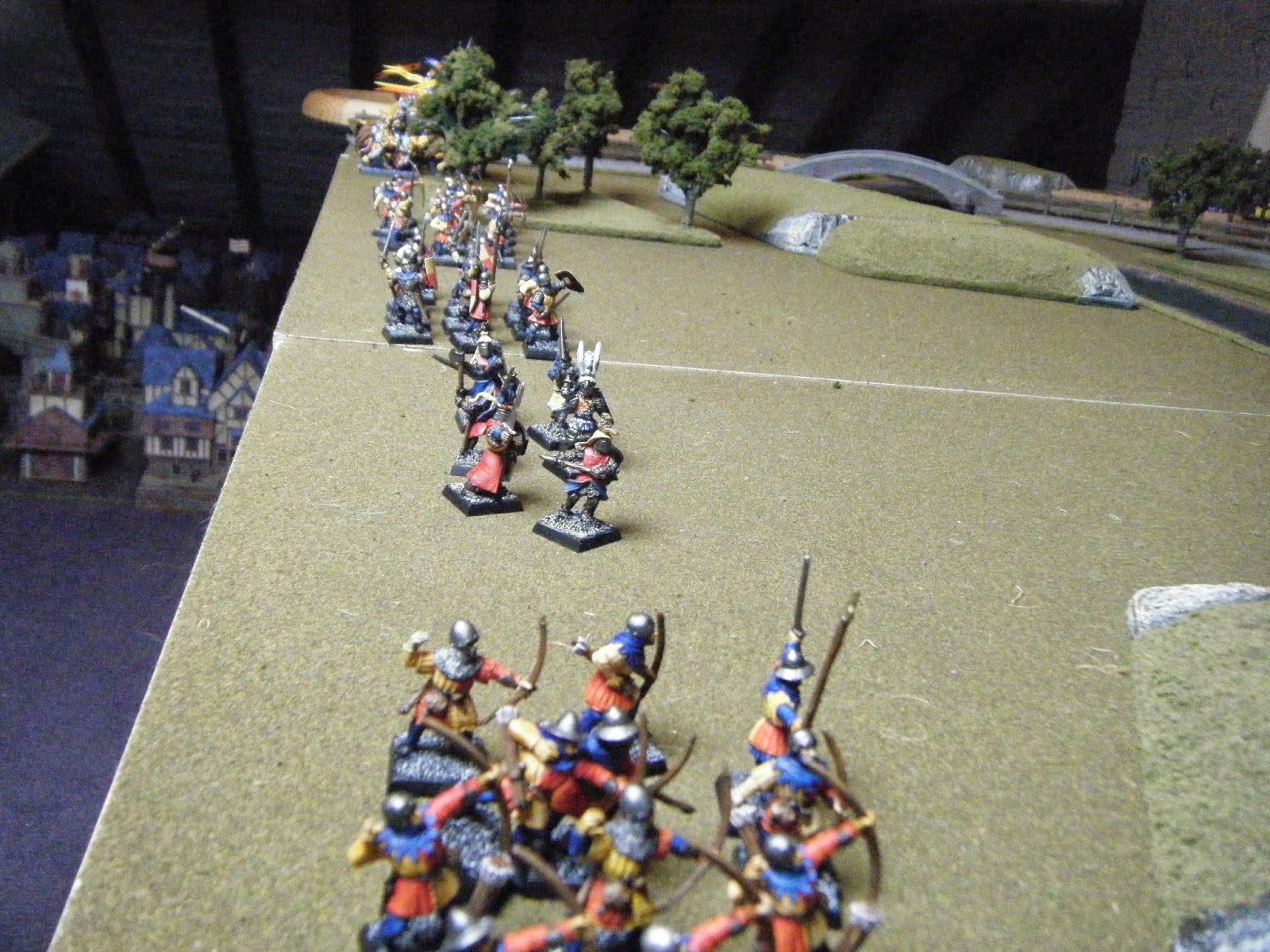 The wolf riders were the first to reach the ford but then got a bit hesistant. After about three turns arsing about at the water's edge, their leader decided to withdraw them. 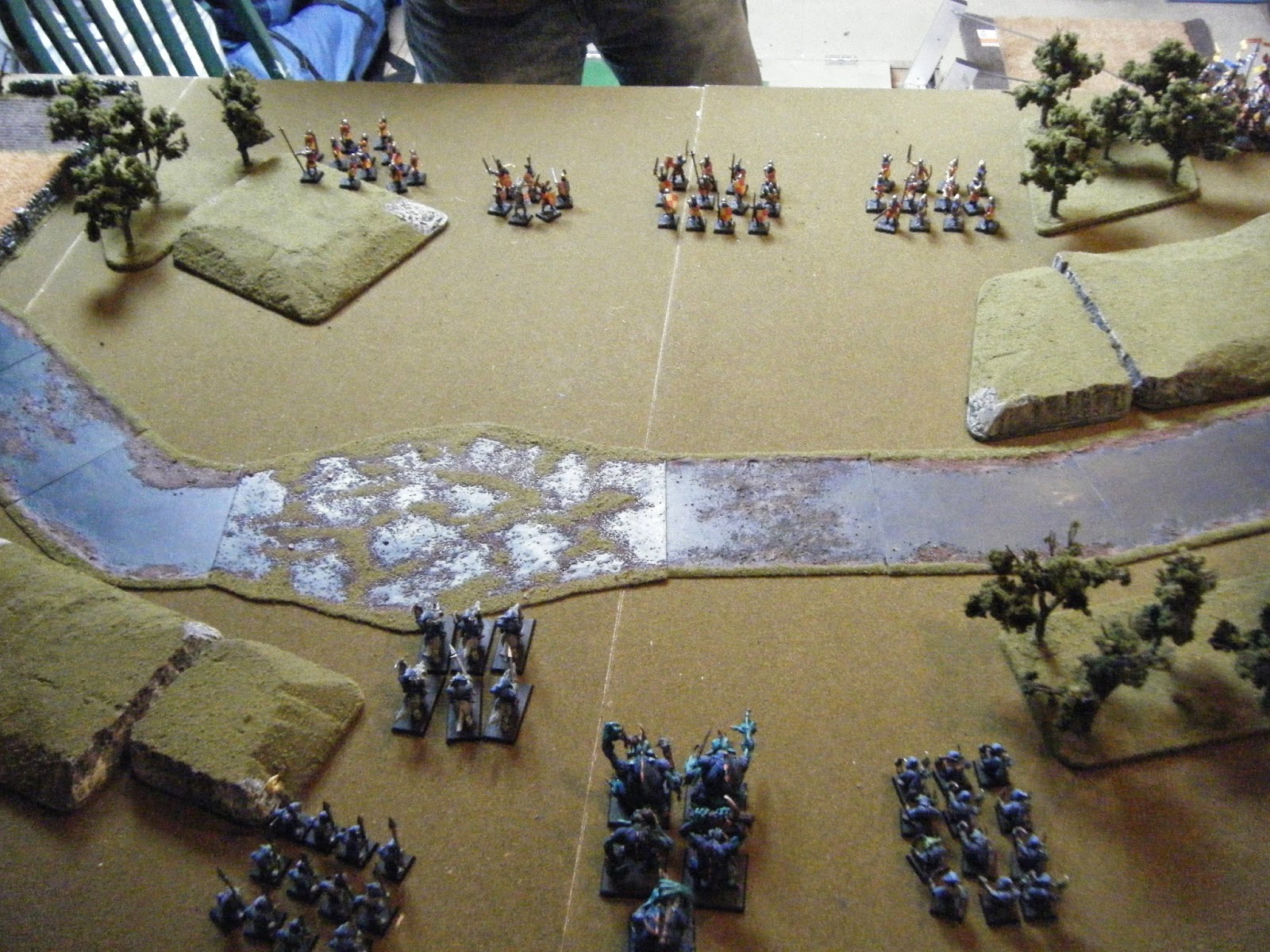 So I sent my foot knights to cross the ford, where their Ferocious nature meant they would have the upper hand on any foe they met there. Unfortunately, with everything else going on, and the nature of Lion Rampant activation, the foot knights got bogged down at the ford, and didn;t manage to get across it. The wolfriders could therefore shoot at them for pretty much the entire game and managed to whittle them down over the course of the game to their last figure. 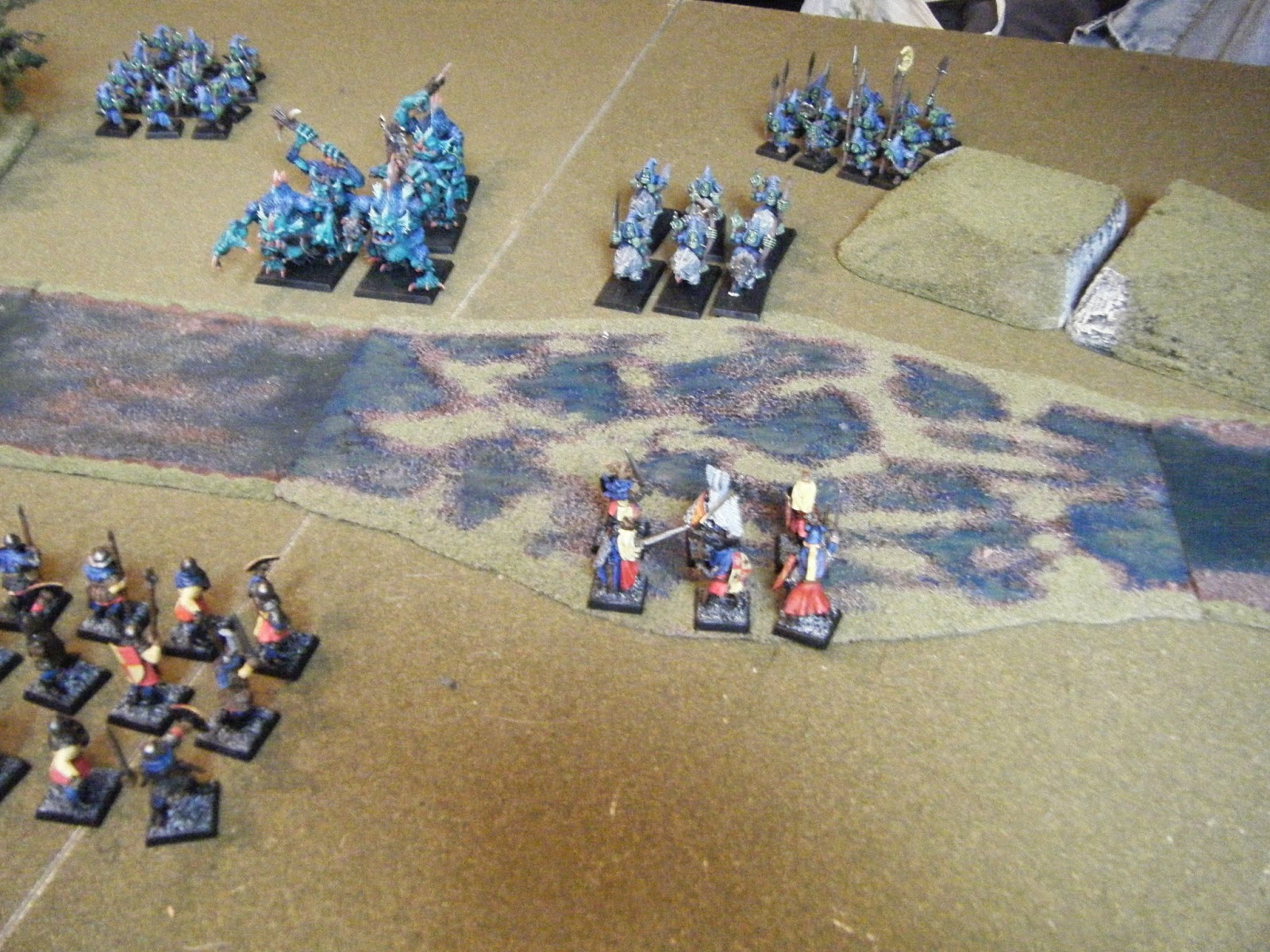 Meanwhile, on the Brets' left the knights spotted some goblins coming up the road. 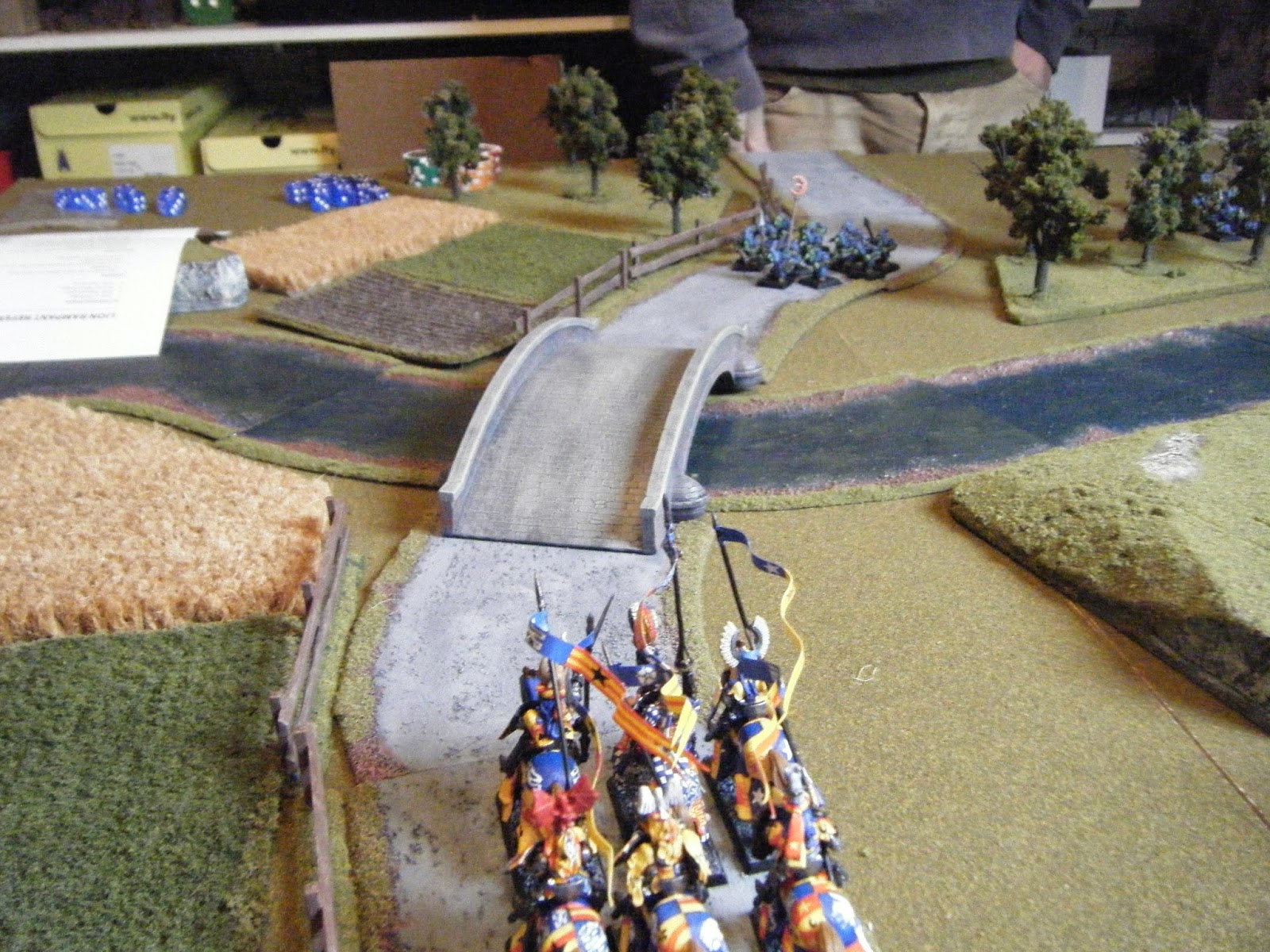 On the other flank the wolfriders charged the Bret archers. Being up-hill helped the Brets and they managed to fend off the attack. The wolfriders, broke, and then after rallying they took some more casualties from archery, and broke again, and down to two figures, took no more part in the action. 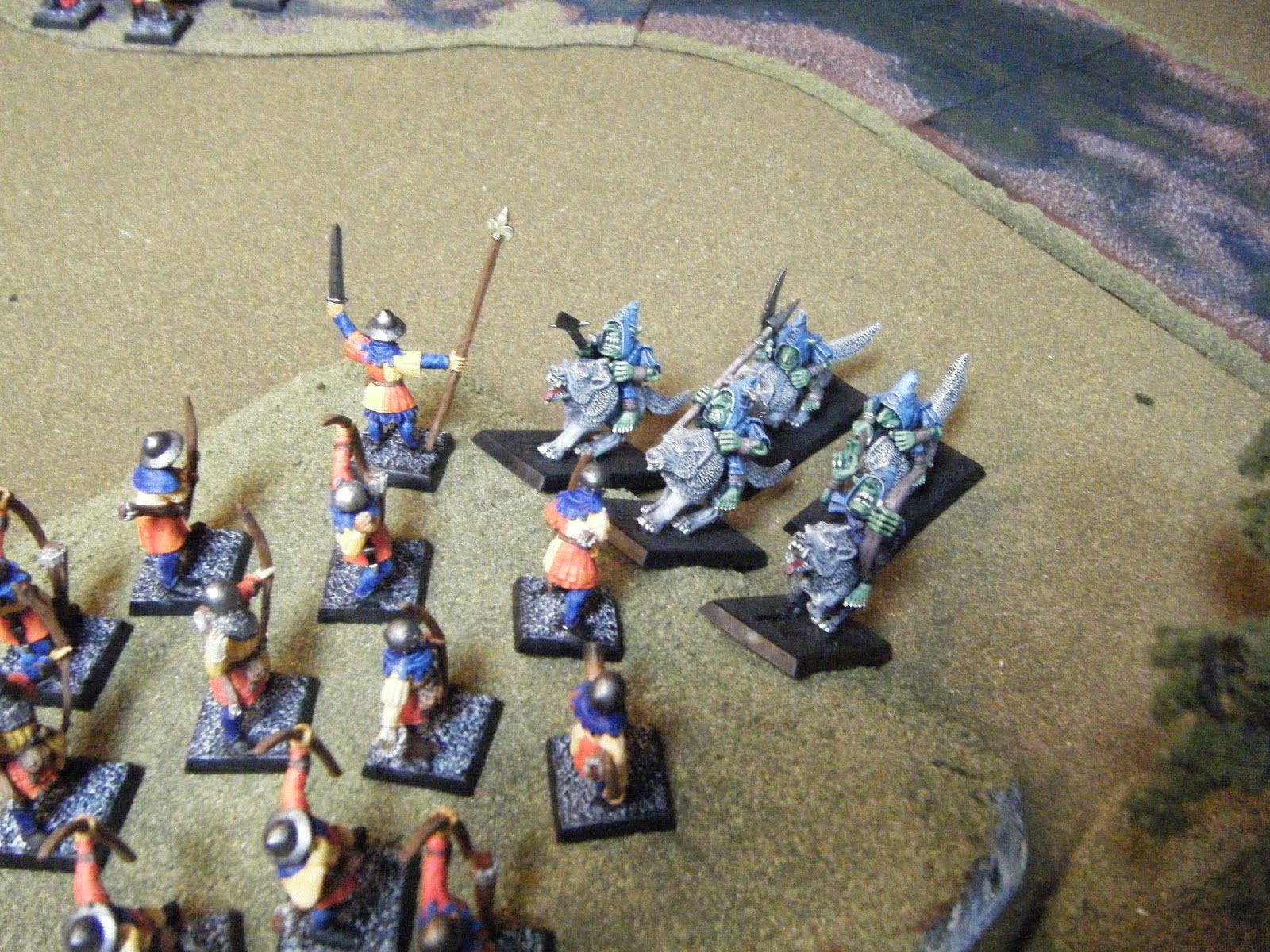 The goblins formed a schiltron on the bridge, but it was not enough to  withstand the knights' charge. The goblins retreated, battered, but managed to rally. Then after some hesitancy, on both sides, the knights charged again and the goblins routed. 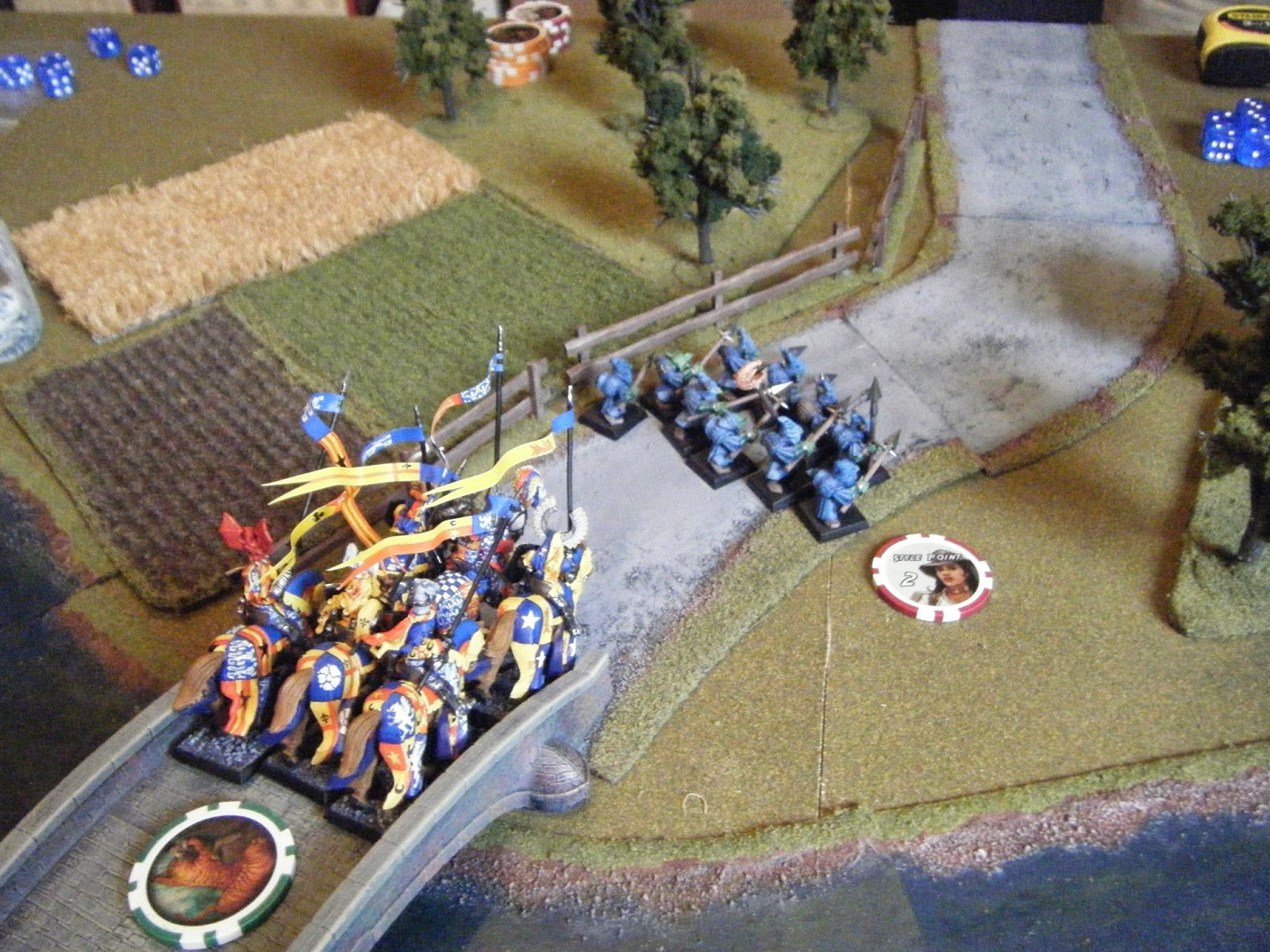 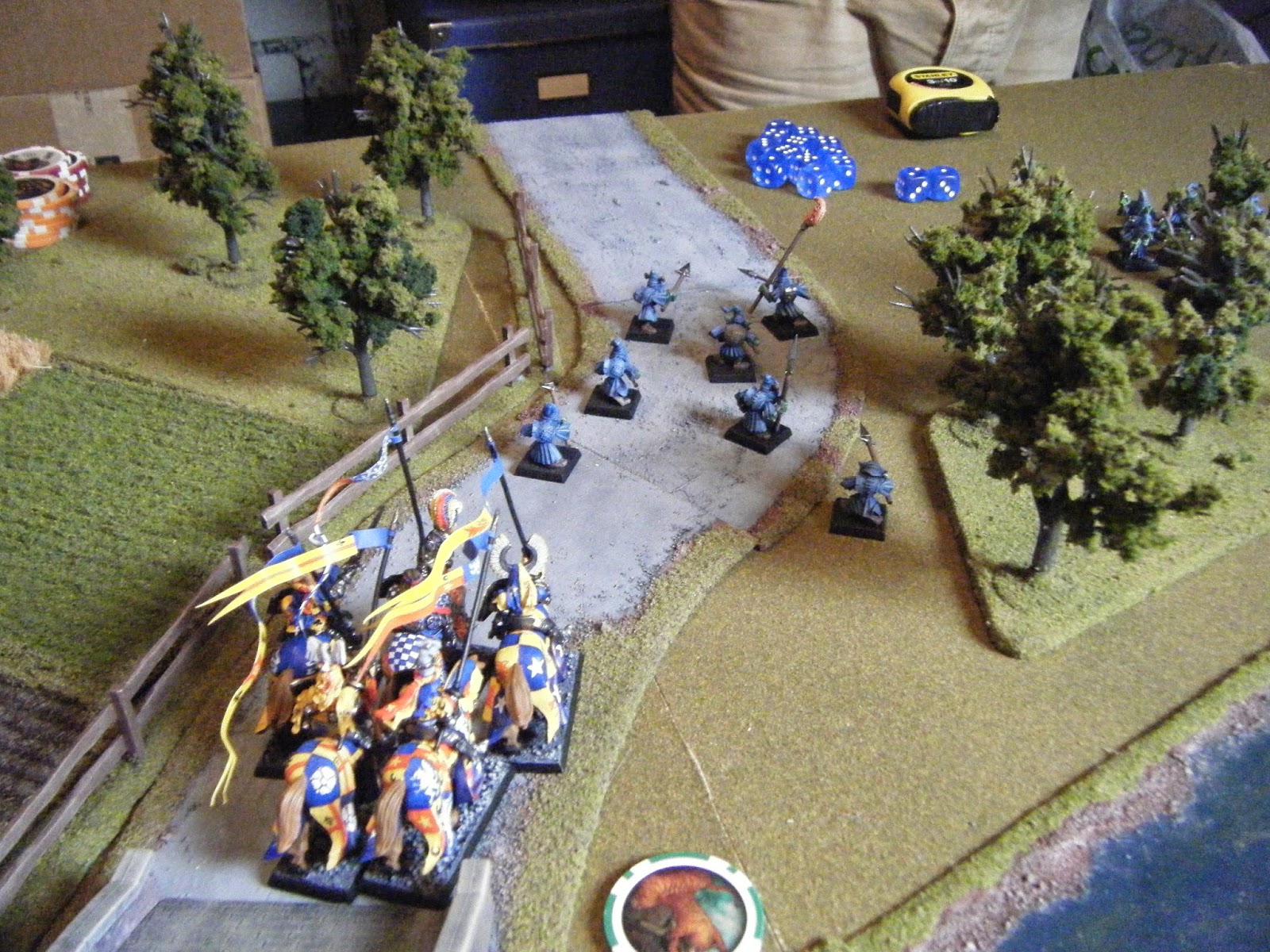 Seeing this, the goblin archers who were next on the knights' list, legged it into the wood. Having read the rules, I was scared that the knights would be forced to Wild Charge the goblins in the wood and be dragged down to their level. So, ever the cautious general, I withdrew the knights back over the bridge. As it happened, the knights took no more part in the game. 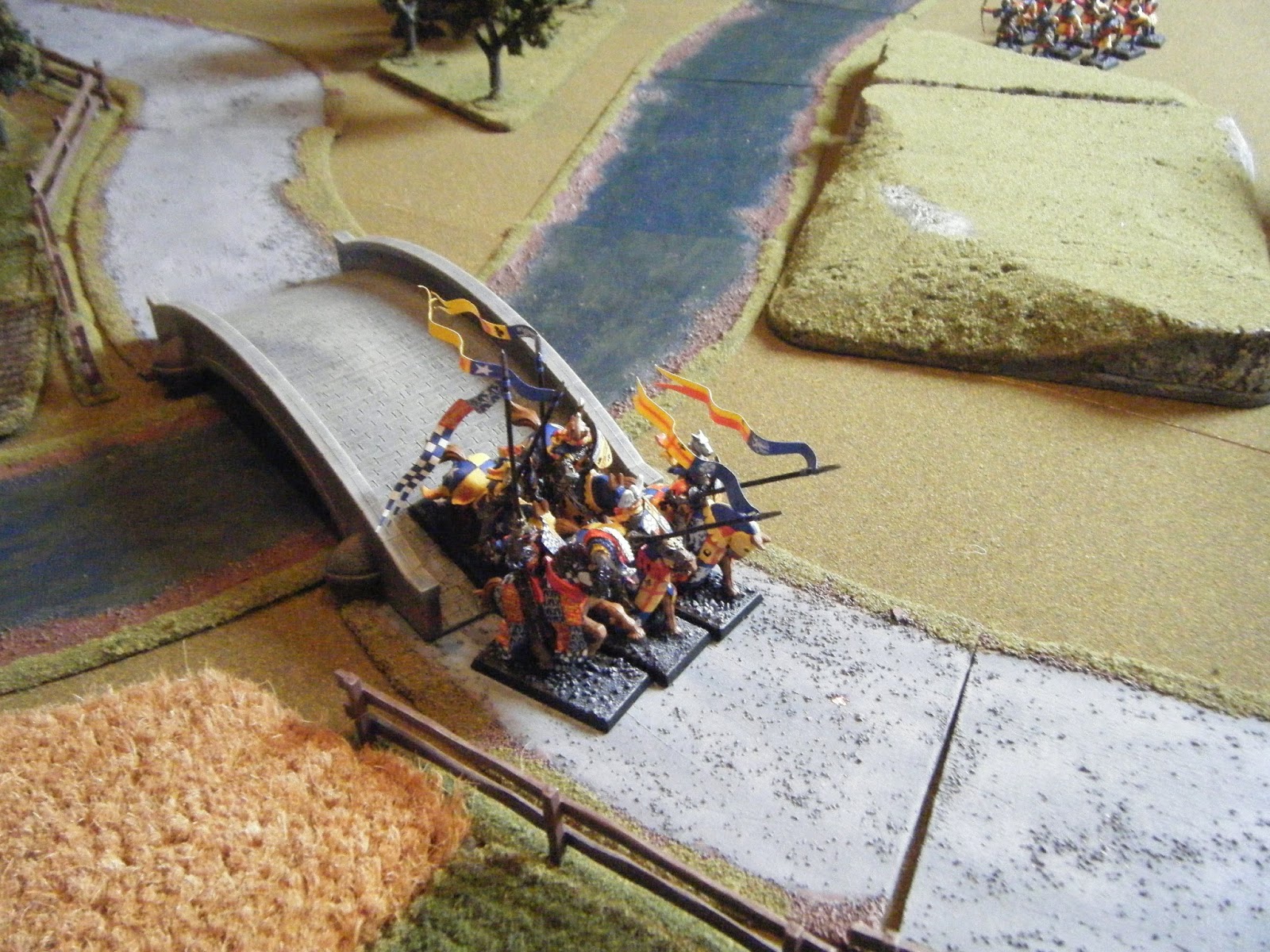 Meanwhile, at the ford, I lined my Men-at-Arms up, facing the trolls, and formed a schiltron, giving my guys the best chance they could get against such a foe. The trolls however, completely ignored that and charged my archers, battering them. 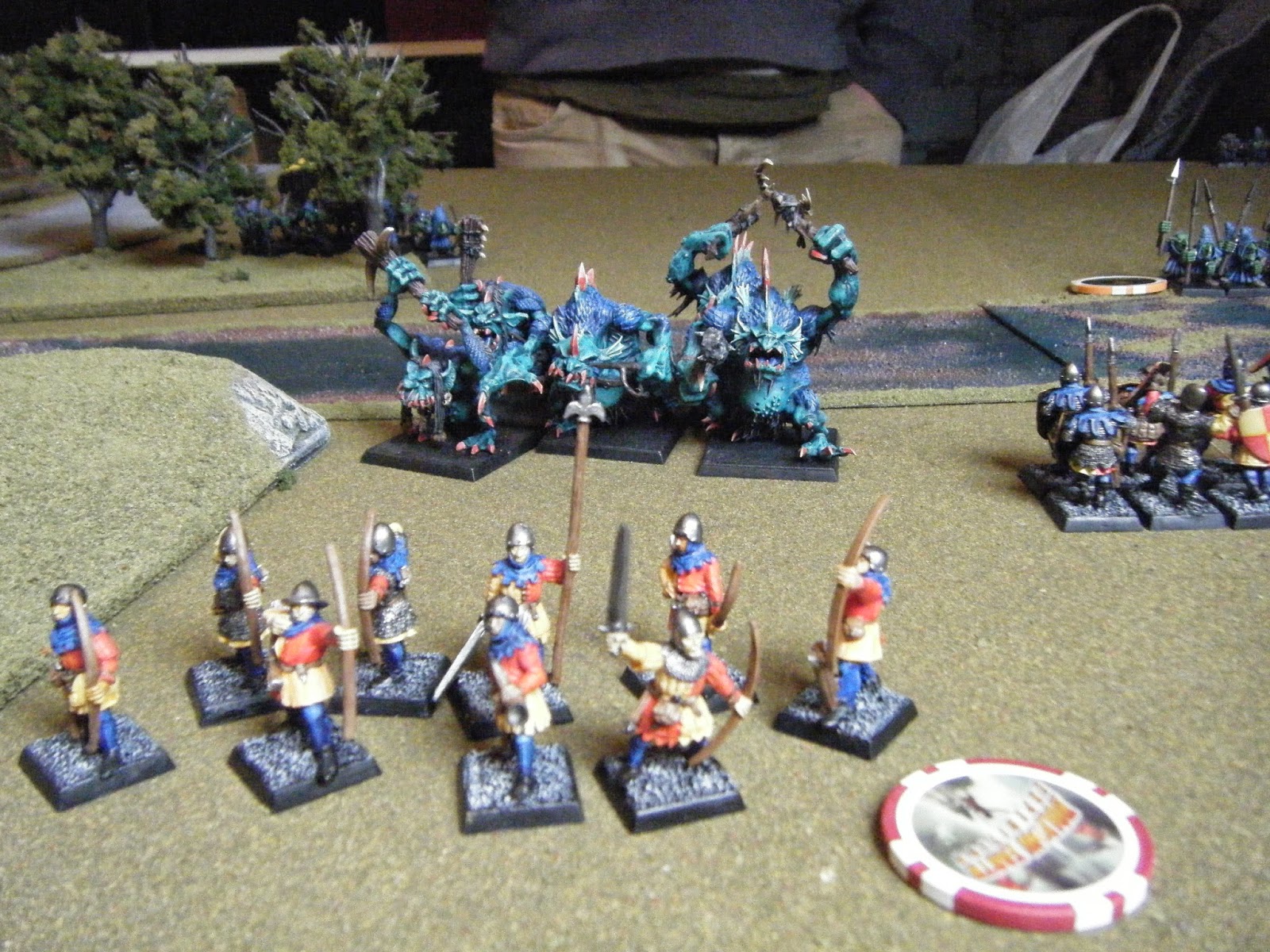 The trolls then turned their attention on the Men-at-Arms. They clashed, and the Brets retreated in good order.

It was a bit of a bizarre outcome, really. Nine goblin figures fleeing after killing the last Bret figure, didn't seem to make much sense, and wasn't very satisfactory (even for the Brets). We decided they'd drowned. We considered making some sort of rule like 'if during an attack you wipe out your foe, no Courage test is required,' or something. 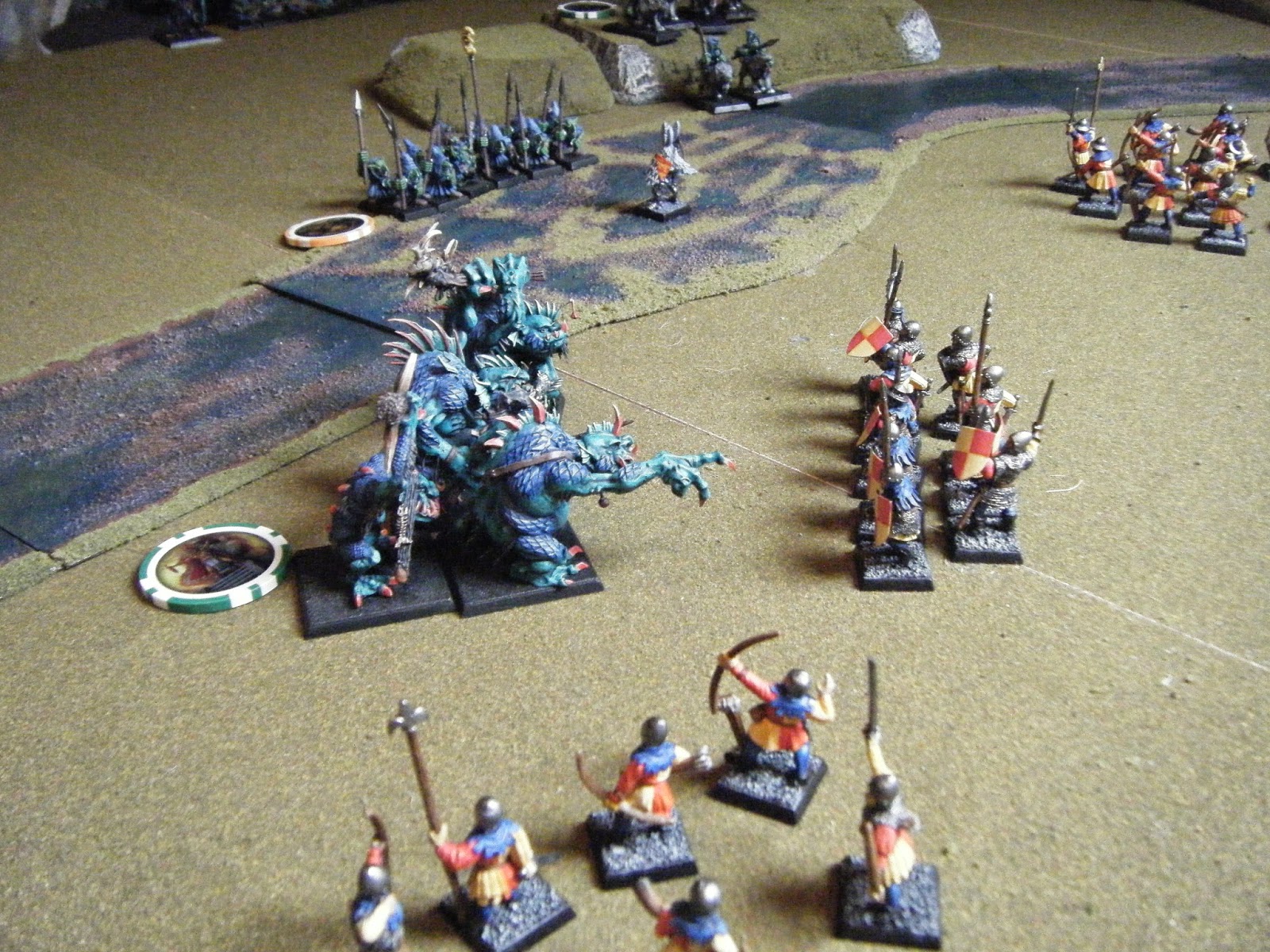 Any way, the Men-at-Arms managed to reform their schiltron, and the trolls charged once more. 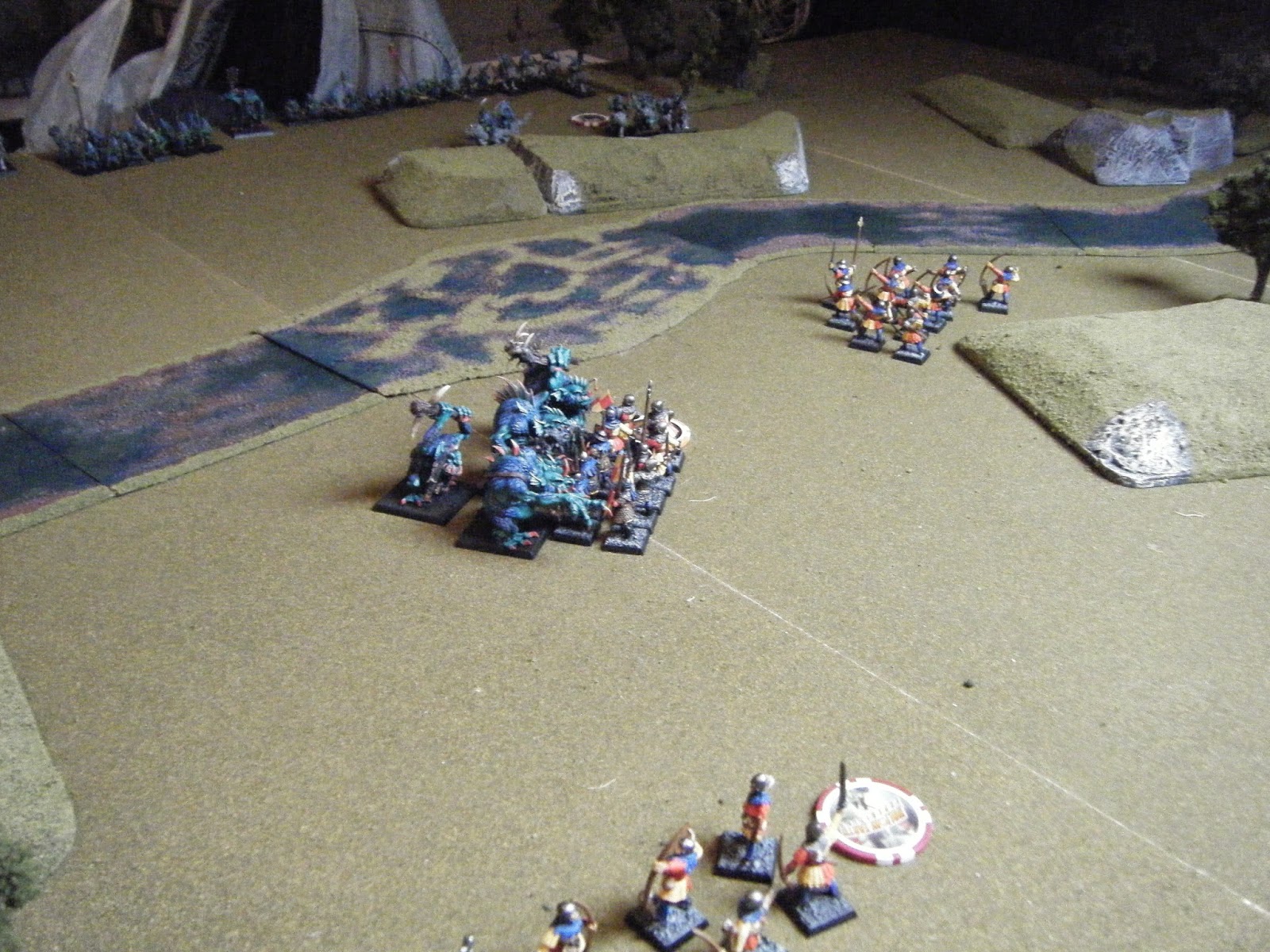 They managed to batter them and the Brets retreated again. That was the end of the game, and we decided the goblins had taken the ford and could claim victory. 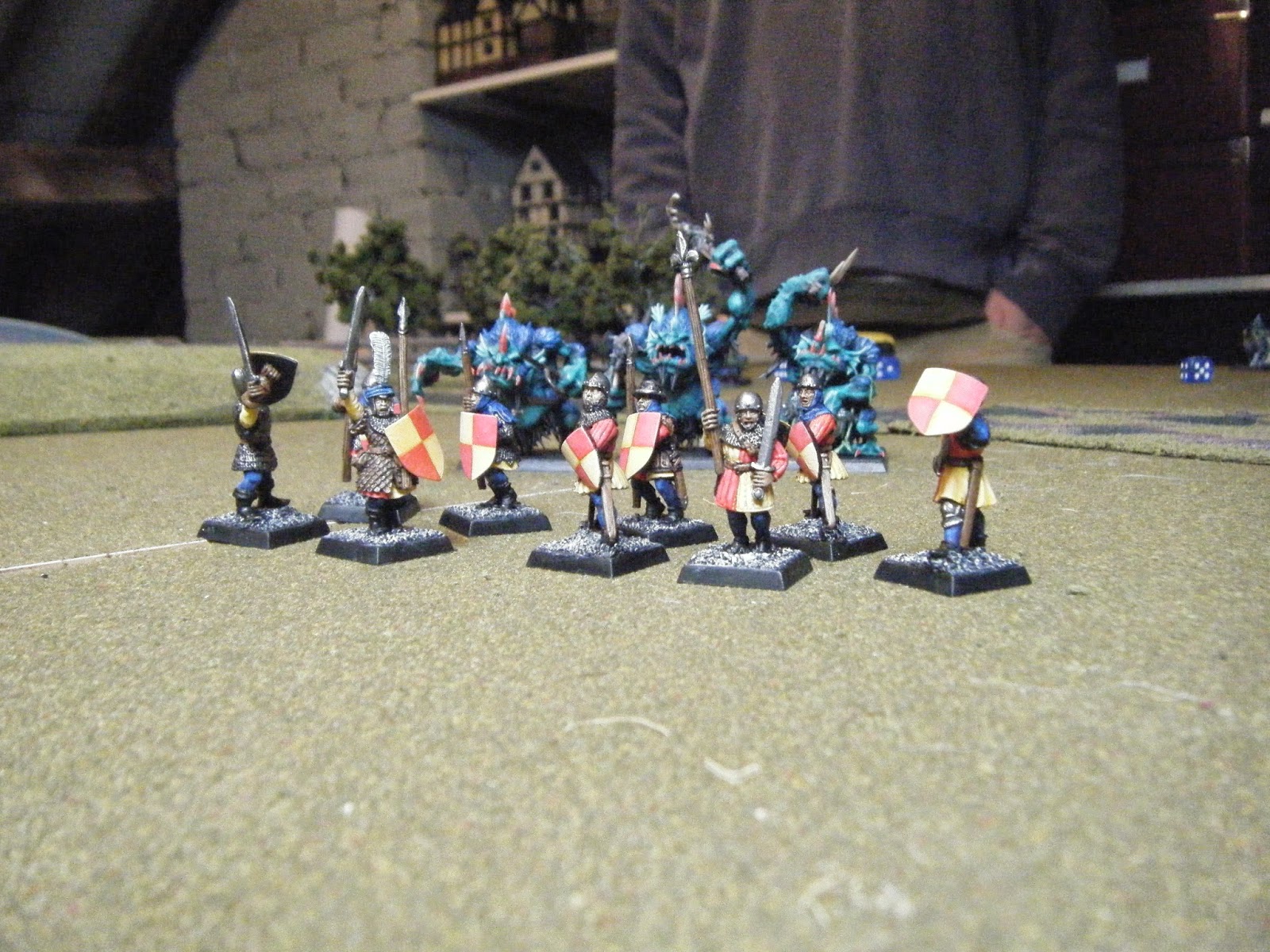 Finished one of my Aggro firms. 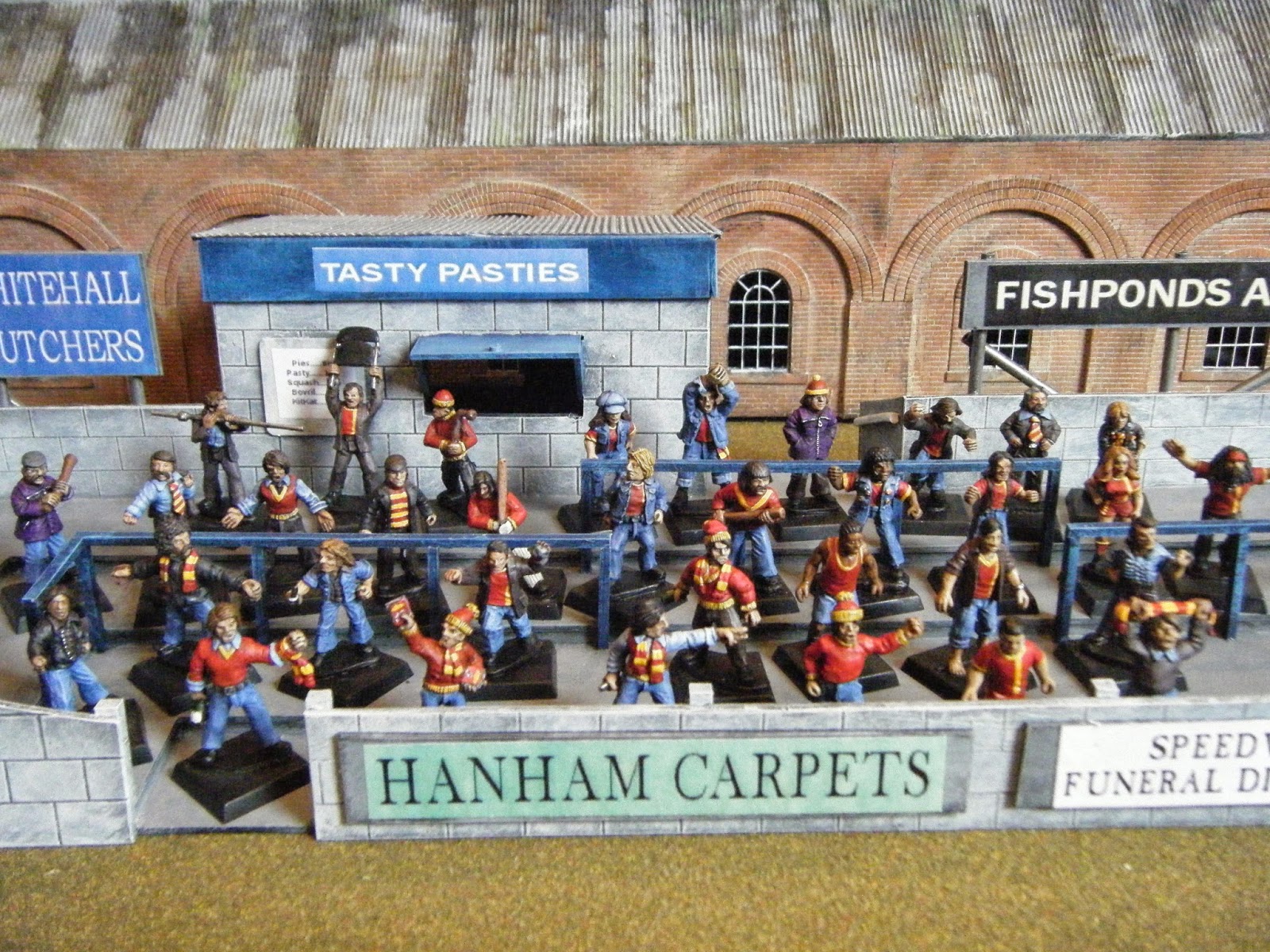 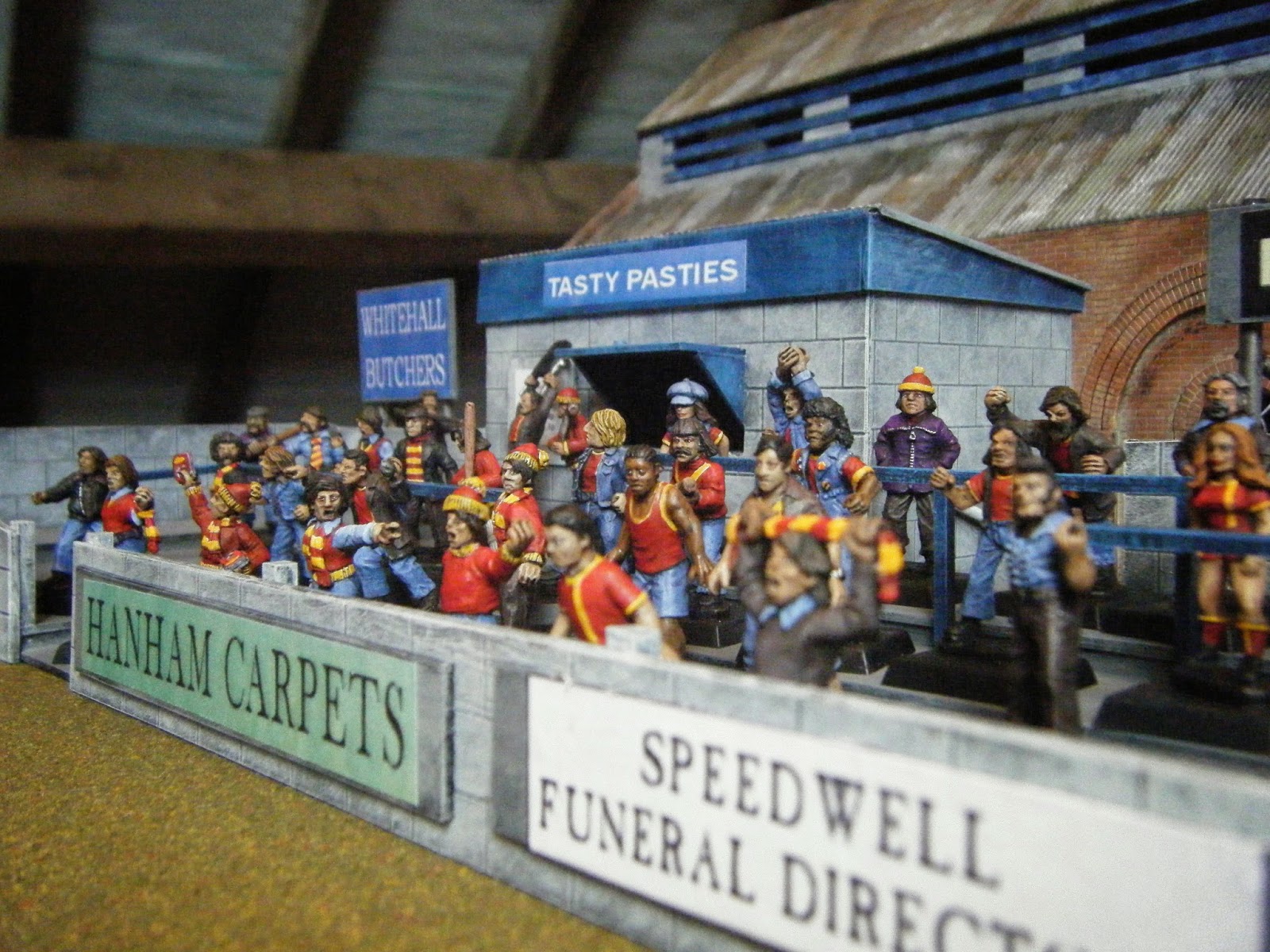 While on the field it may have seemed like a Roy of the Rovers story for Melchester in the 70s, off the field, things were less comic. The Melchester Rovers fans in the 70s were famous for following their team through the slings and roundabouts (and several kidnappings) of outrageous football fortune, and also for shouting handy descriptions of the action from the sidelines. What is less well-known is that the darker side of football fanaticism reached even as far as these media darlings.

The Melchester Headhunters soon gained a reputation as one of the most violent and disruptive hooligan firms. While Melchester Rovers were being crowned champions one year, and being relegated the next, the Headhunters could be guaranteed to follow their team through thick and thin, and leave a scene of destruction in their wake. Whether it was against fans of local rivals Melboro, or the firms of teams such as Everpool, Burndean or Tynecaster, the Headhunters would express their love of their club through acts of violence, especially kicking people's heads in.

Things reached their nadir during the 1978 European Cup Final. A 3-2 loss to Dutch champions Alkhoven resulted in pitched battles and uncontrollable mayhem as the two sets of fans fought through the streets of Lombardo. These shocking scenes drawn across the pages of dozens of comics meant that no longer could Roy Race's dark underbelly be ignored.

These days, football across the land has managed to clean up its act, the arrival of Melchester fans is no longer greeted with dread by rival stewards and the police. But even today, among the gentrified, middle-aged prawn sandwich brigade of Mel Park, the odd wistful comment of nostalgia for those heady days of mindless violence can still be heard.