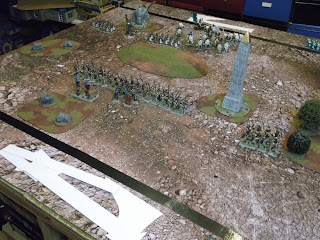 Played a couple of games with my Undead against the Kingdoms. The first one was pretty close until the last turn when one of my Warrior units rampaged around killing everything. This second one was not so close. The Undead are unique and annoying in many game systems, and Saga is not an exception. It has a couple of very tasty abilities, that present a problem for its opponents.

I played my Undead warband with a Necromancer, 4 big units of 12 Warriors (2 with bows), 4 Hearthguard and 2 Creatures. I'm considering dropping the Creatures for 4 more Hearthguard, as keeping the Necromancer alive (or dead) is probably key. If I were to play against this warband, I think I would do what I could to kill the Necromancer early on. 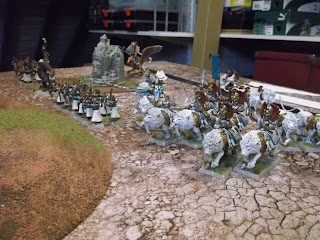 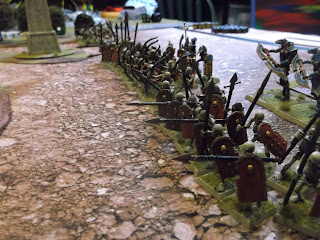 The Undead BB has a few things going on. It doesn't have much in the way of Melee attack buffs. The main one is Howling Pack which allows you to add the number of attack dice you outnumber your opponent by. This is great if you're a unit of 12 Warriors against 4 Hearthguard. It has a couple of cheap activations.

I have found the surprise most annoying Ability, however, to be Already Dead! This gives a unit of warriors Resilience (4), while giving up attack and defence dice. This means you get to march your warriors deep into enemy territory confident they will withstand a counter-attack. I think all the BBs in AoM have a good 'stand there and take it' buff, but this one has to be the best (the drawback, that it's Warriors only, is not really an issue with this list). 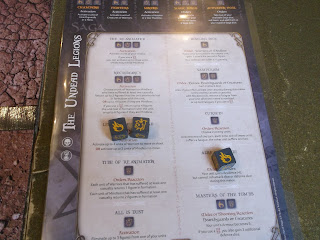 I decided to go with spells that help with extra activations. The skeleton Warriors can quickly recover from melee and go again, and again, and the archers can really spam an enemy, so I chose spells that can bring even more, cheap, charges and archery. 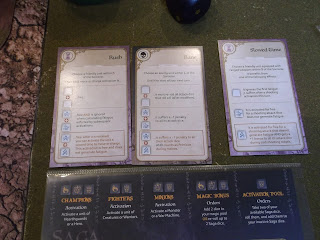 I was playing against a warband I made so its failure might be my fault, but it feels like a nicely-balanced, all-round, warband that should have a decent chance in most games. The Kingdoms board has a couple of no-brainer buffs at the top of its board. One is attack oriented and the other defence. They give 2 dice or 4 if against more than 12 attack dice, with a +1 bonus for using a rare.

Inspiration and Exhortation have similar attack/defence themes, but they require a nearby hero to take a fatigue, so these are riskier to use. 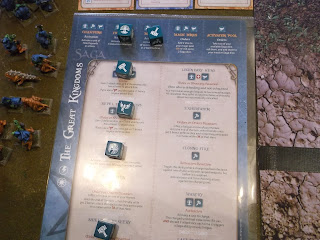 I chose these spells, too. They seem to give decent all-round cover without being clever. Laying on Hands is always useful, and usually eats most of the Sorceror's Magic Dice. 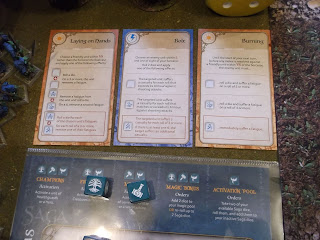 The first Undead turn I simply moved everything forward M. The Kingdoms was pretty tentative, filling all his melee abilities and moving his Creatures up. The Creatures against a unit of archers looks like a massacre waiting to happen, but the Undead are tougher than they look, especially in a unit of 12.

The other unit of archers spent the first couple of turns wiping out their opposite number of archer levies. Tide of Reanimation, All is Dust, and the Necromancer's Slowed Time spell meant they could ping the enemy to death almost with impunity. 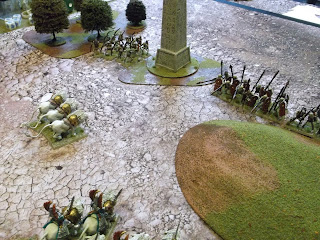 I find the Undead are usually short of rare dice (skulls) and have too many uncommons (banners) spare. This is because my warband has no levies, and the abilities that give a choice between uncommon and rare give a decent bonus for using rare. My uncommons usually hang out on Vampirism and All is Dust until required, and apart from that there's not much to do with them. 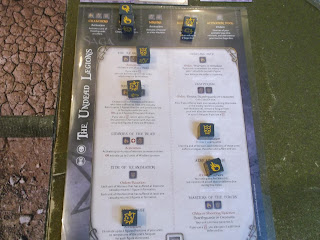 In the second turn I used the Rush spell to get my warriors engaged with the enemy levy archers, and the Kingdoms piled all their defensive bonuses on, to keep the archers alive. I then attacked the archers a second time and decimated them. But my warriors were left hanging with two fatigues, right next to the enemy Titan. 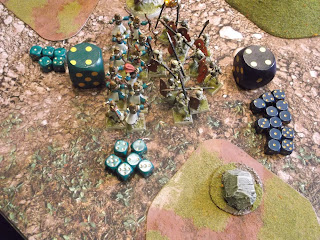 In the Kingdoms turn, on the other flank, the creatures rip into a unit of archers. I could have played Already Dead! on these guys and saved them, but I was saving that for my warriors. The Creatures take out ten archers, but it isn't enough to destroy the unit, and inevitably, most of them return to the fight before the end of the game. 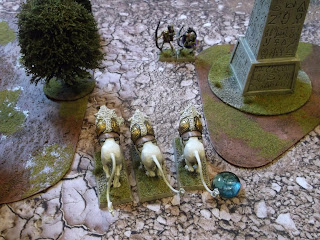 Using Already Dead! on my warriors as they are attacked by the Titan, all they get is a couple of fatigue, when they should be getting wiped out. 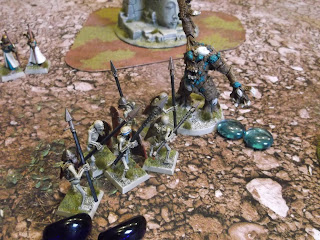 My archers withdraw and reanimate and they are back in the game. The nearby Sacred Ground gives them a bonus figure for their necromancy. 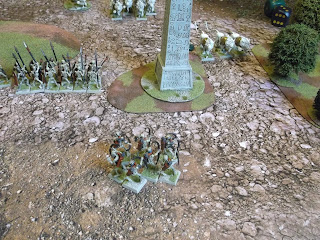 My warrior unit ends up with 1 figure, but the Kingdoms doesn't have the spare activation required to get rid of it once and for all. And next turn it goes back up to 5 again. 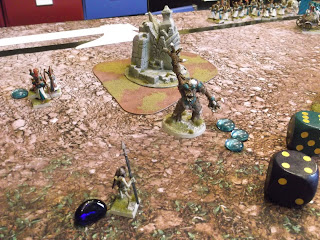 This is the state of the field after the fourth turn. The Kingdoms have lost nearly three whole units, including its Hearthguard and are down to 3 Saga Dice. The Undead have lost a few figures from some of its warrior units, but that's all. We couldn't see any hope for the Kingdoms.

The Undead are properly annoying and tenacious, and it's difficult to see exactly what to do against this particular warband. I think hitting the Necromancer early,  maybe with some flying stuff, should be good. Aiming a lot of resources at a single warrior unit, to ensure it is completely destroyed, before moving on to the next unit, is the way to go, but a lot easier said than done, especially with its Already Dead! ability. 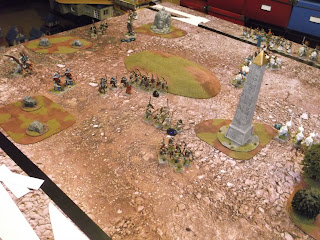 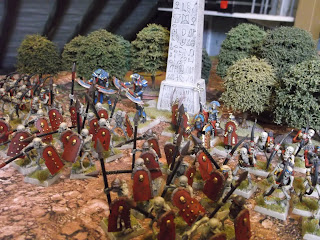 Finished 8 points of undead for Saga. This looks a bit more like a traditional Saga warband. I might even get rid of the Ushabti, which are fielded as Creatures, and go for another unit of skeleton Warriors.

The thing about the undead is that they keep coming back to haunt you; you can replenish damaged units with Saga abilities. This makes them pretty annoying. There are not a lot of combat buffs on their Battle Board, but there are a few cheap activations and a couple of replenishments, so this is where their power lies. They even have a way to take casualties to slough fatigue, so coupled with replenishment of those very casualties, this is a decent way to get rid of fatigue.

You also get to combine your Warlord figure and your Sorceror figure into a Necromancer (essentially a Sorceror with We Obey) which effectively gives you an extra Army Point to play with. This also means you really need to keep it alive.

I also found a cheap paperweight type ornament which works as a decent Sacred Ground marker.

I decided to go for big units (coz you can't replenish completely destroyed units) and my first effort at a warband looks like this and generates a decent 7 Saga Dice: 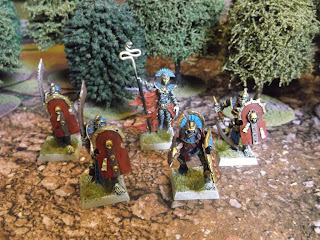 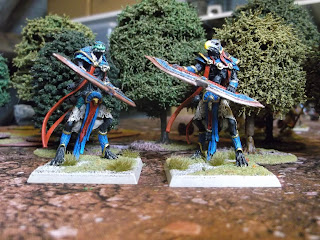 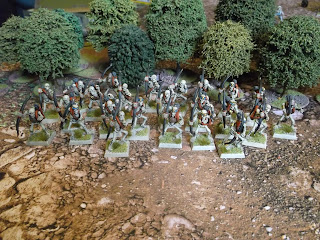 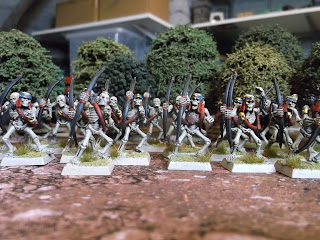 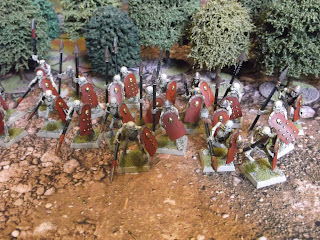 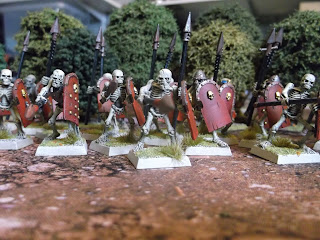 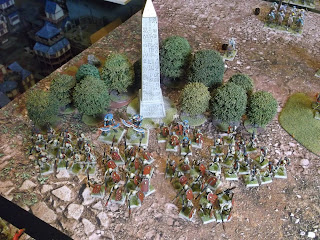