Here's another factory building.This is a bit bigger than the others and it will probably be the last for a while because my 4' diameter table is getting full. 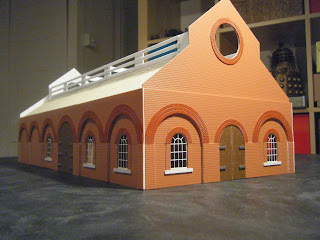 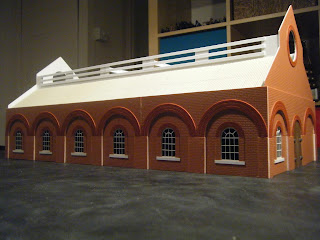 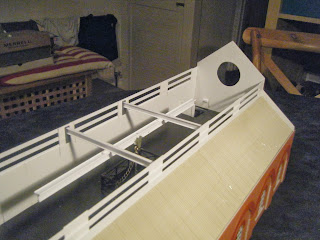 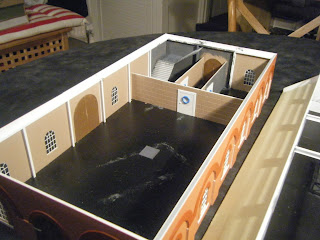 We decided to play a defend the village sort of thing, with the village on a crossroads being attacked from all directions. This turned out to be a bit of a pain for Major Magnos' company, coz it isolated him from his Sidekicks, and his Leader effect. 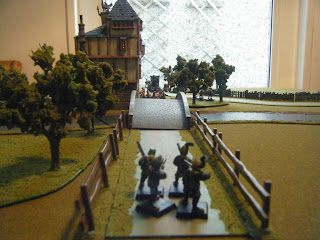 We started four soldiers down one end of the road. 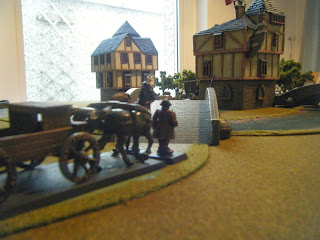 Doctor Proust and Marius came by cart. Proust was tooled up with his new-fangled witch disintegrator gun. 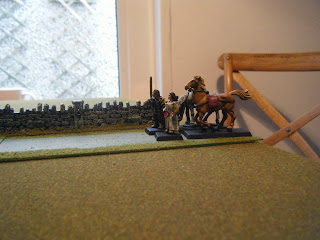 Major Magnos forsook the rest of his forces and simply accompanied his new girlfriend. It was a decision they would both soon come to regret for the rest of their very brief lives. 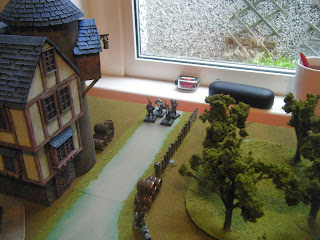 As for the other four soldiers. They could have pitched camp and started making rabbit stew for all the effect they had on the battle. First rule of leadership: have someone to lead. 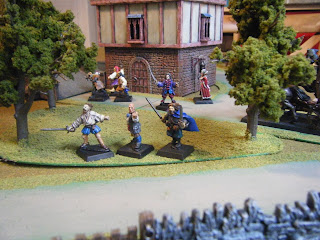 Meanwhile, Perro and two of his angry villagers hid in the forest, while Lady Dunwood and her late husband stayed with the rest of the mob in the centre. 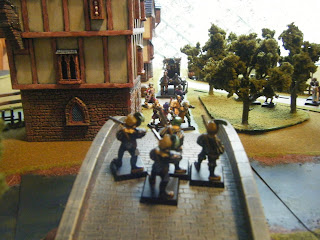 The first band of soldiers make their way across the bridge and see the Dunwoods and the villagers. 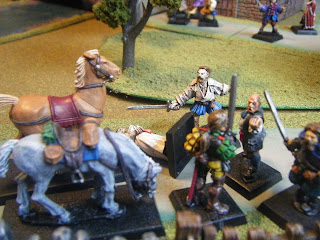 Magnos and Kiera are ambushed. Her screams are futile and Perro cuts her down ruthlessly. The rest of the mob pile on Magnos. 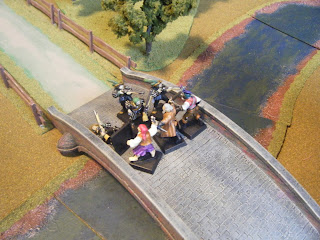 The other villagers charge the soldiers on the bridge before they even get the chance to fire. 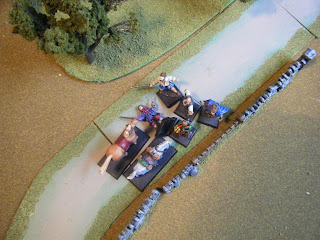 Lord Dunwood piles in to face Magnos in what would have been the climactic battle had it not happened right at the beginning. Magnos cuts him down. 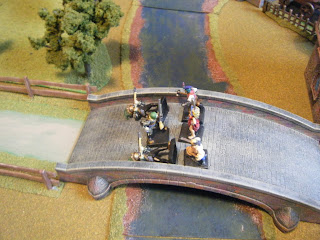 The soldiers are no match for the villagers. 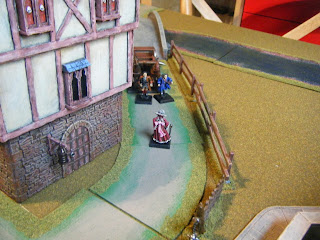 Lady Dunwood goes to greet Proust and Marius. Proust shoots his Witch Disintegrator Gun at her which promptly blows itself up. 15 Ratings down the drain. 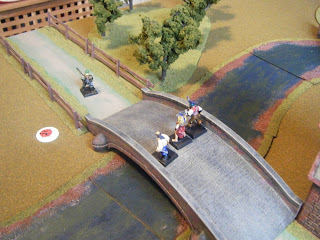 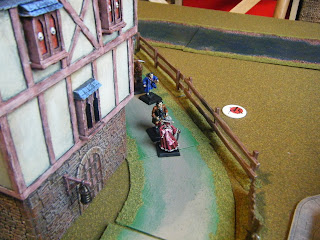 Marius bravely tries to take on Lady Dunwood and manages to wound her. 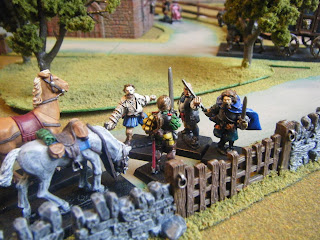 Meanwhile Major Magnos has to face Perro and his gang. In the movie he dispatches them all in about 7 frames. But this isn't the movies. This is real life. 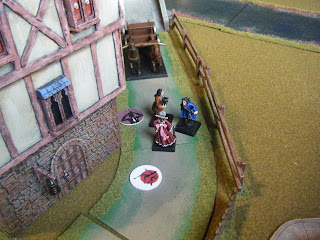 Lady Dunwood hypnotises Marius and turns him to her evil will. It's surely only a matter of time for Doctor Proust. 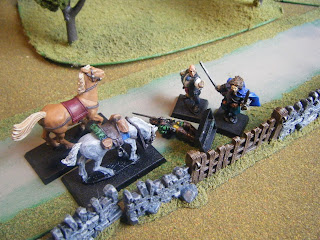 And although he kills Perro, Magnos is cut down by the rabid mob. 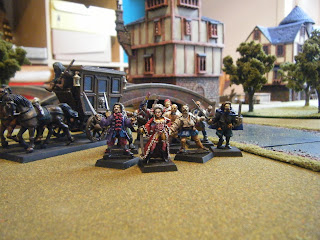 Posted by Monkeylite at 05:06 No comments:

Here's a slightly different cast for 7TV. It's quite impressive that a rules-light game like this focused on stuff like The Sweeney can do Major Magnos spot on, with the rules pretty much as written. I suppose the rules of adventure drama in 7TV trump the rules of military simulation. We knew that anyway, but it's interesting to see by how much. 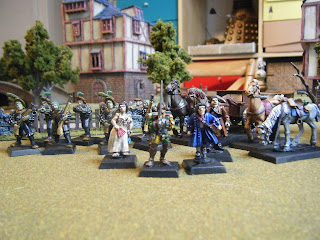 In the early ‘70s, during a break from writing for The Daredevils, Brian Clements wrote and directed this movie for celebrated horror house, Clobber Films.

The film is set in an unspecified central European country in the 18th Century. Major Magnos and Doctor Proust seem to be experienced witch (and other strangeness) hunters, although their past or which war Magnos has been recently retired from, is never explained.

At the behest of old friend Marius, the pair come to a rural village and Magnos takes his top off and is seduced by Kiera, a village girl. They discover that many of the most attractive villagers are being drained of their youth. Proust uses his arcane knowledge and techniques to track the evil to the house of the aristocratic Dunwoods. He also creates a silver sword for Magnos believing silver to be the evil’s weakness.

Lady Dunwood has been using the villagers’ life energy to bring her husband back to life as some sort of vampire. Accompanied by some local soldiers, Magnos and his sidekicks get past a gang of villagers who have been paid by Lady Dunwood to hamper them, and make their way to Dunwood House. Kiera distracts the Dunwoods so that Magnos can kill them with his sword.

The movie was a success and helped support Clobber which was ailing financially. It has since established itself as a cult, widely regarded as one of the best Clobber movies and also one that exemplified many of its signature elements.

This success meant that a number of sequels were slated at Clobber but financial troubles meant that none of them left the drawing board. Outlines still exist for Major Magnos - The Witch’s Mark, Major Magnos – The Ghouls’ Tomb, and one simply called ‘The one with the devil.’

In The Witch’s Mark, Magnos and Proust were to hunt down a dangerous coven that has been terrorising a rural village. Magnos takes his top off and is seduced by Klara, a village girl who turns out to be a witch herself. And in the finale, it is discovered that every woman in the village is a witch.

In The Ghouls’ Tomb, Magnos and Proust were to come to a rural village that is being plagued by creatures from the nearby war-cemetery. Magnos takes his top off and is seduced by Katie, a village girl. Using Proust’s arcane knowledge the three of them make their way to the crypt at the centre of the cemetery in order to end the Ghouls’ curse.

In the one with the devil, Magnos and Proust were to investigate strange visitations in a rural village where there is said to be a gateway to hell. Magnos takes his top off and is seduced by the devil’s thirteen daughters.
Posted by Monkeylite at 04:59 No comments: