So this is all going pretty slowly, at the moment. I've done a few more rooms in the house. My kitchen is one of those special kitchens that doesn't actually have any cooking facilities. 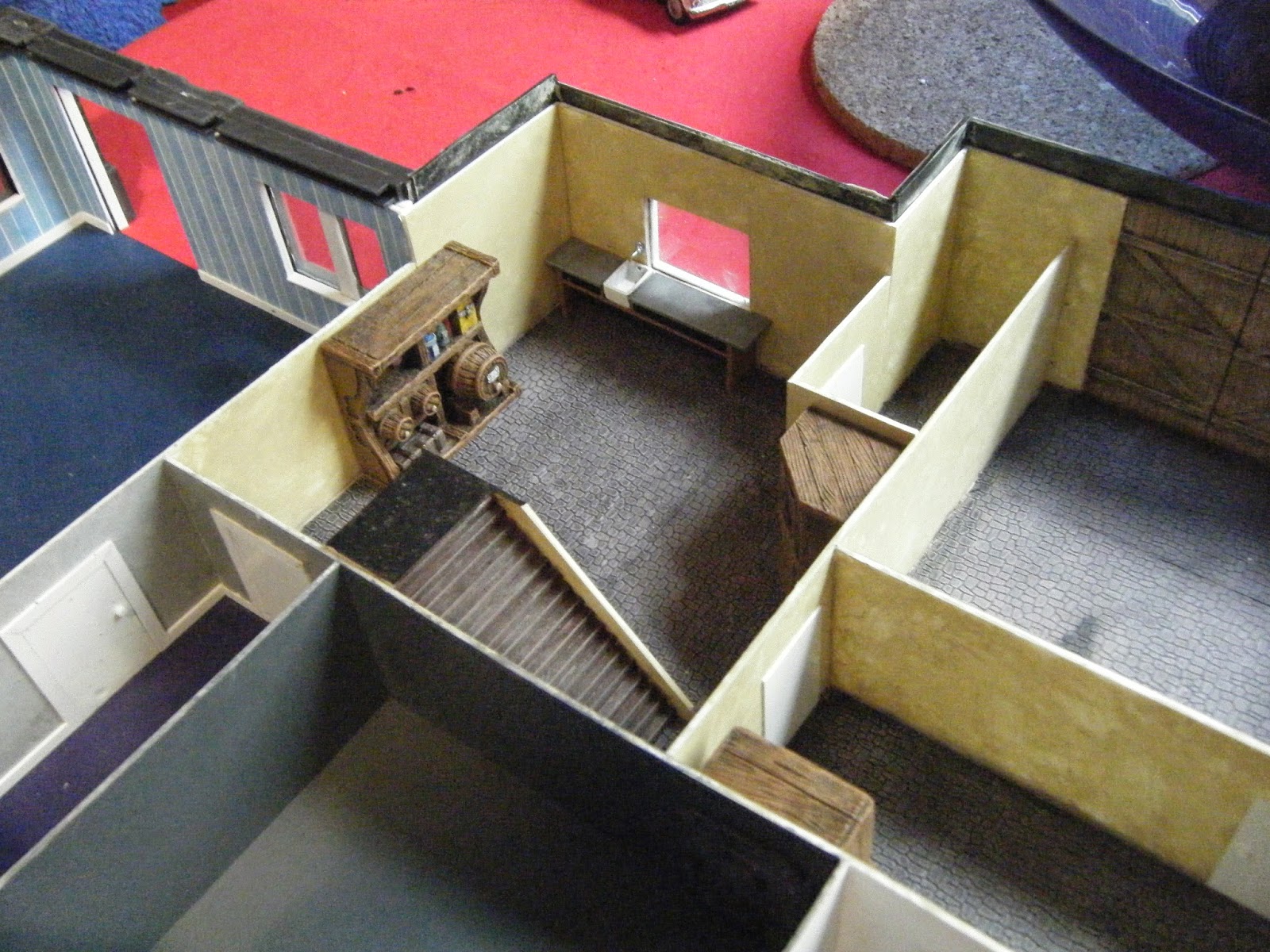 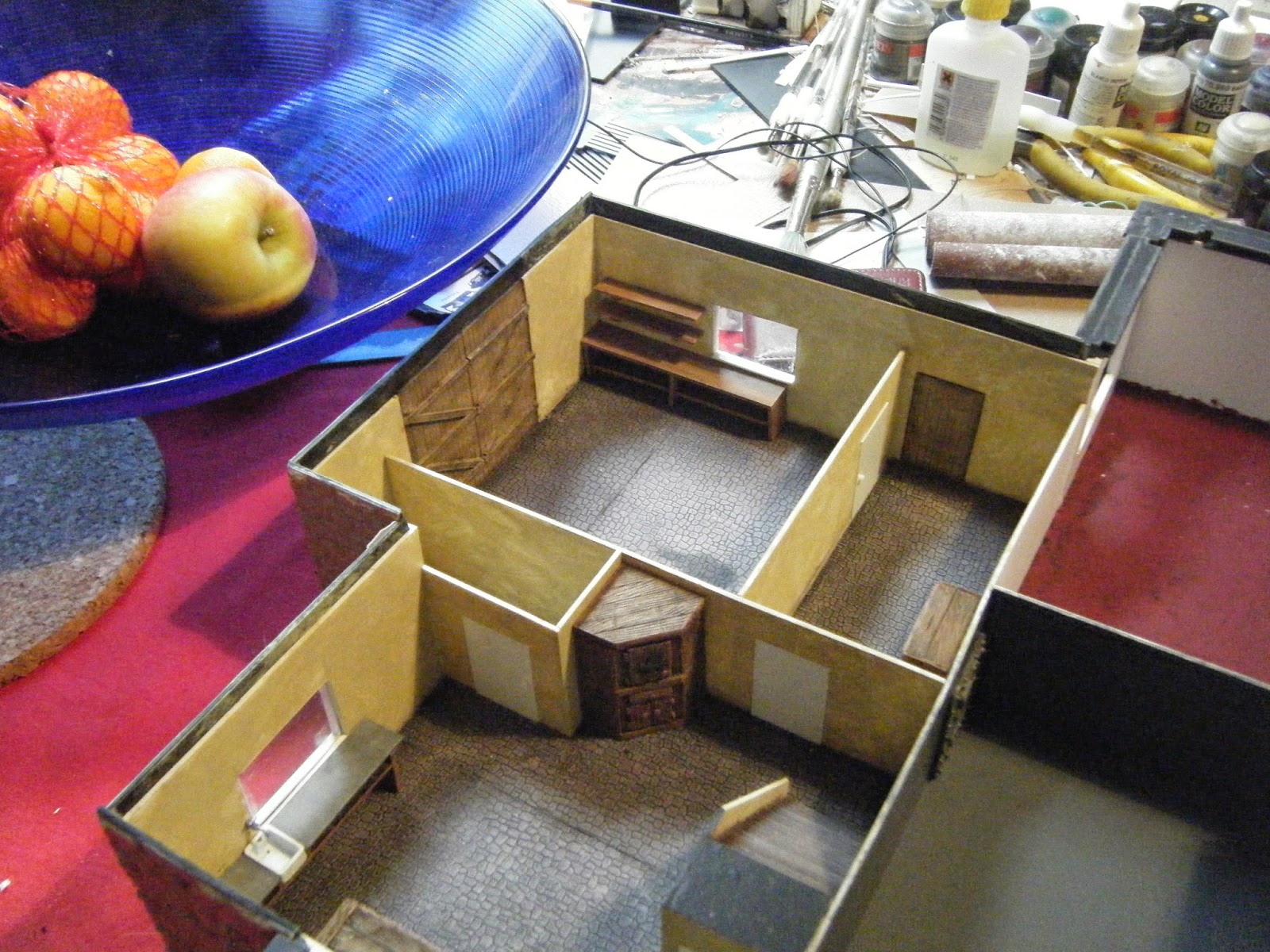 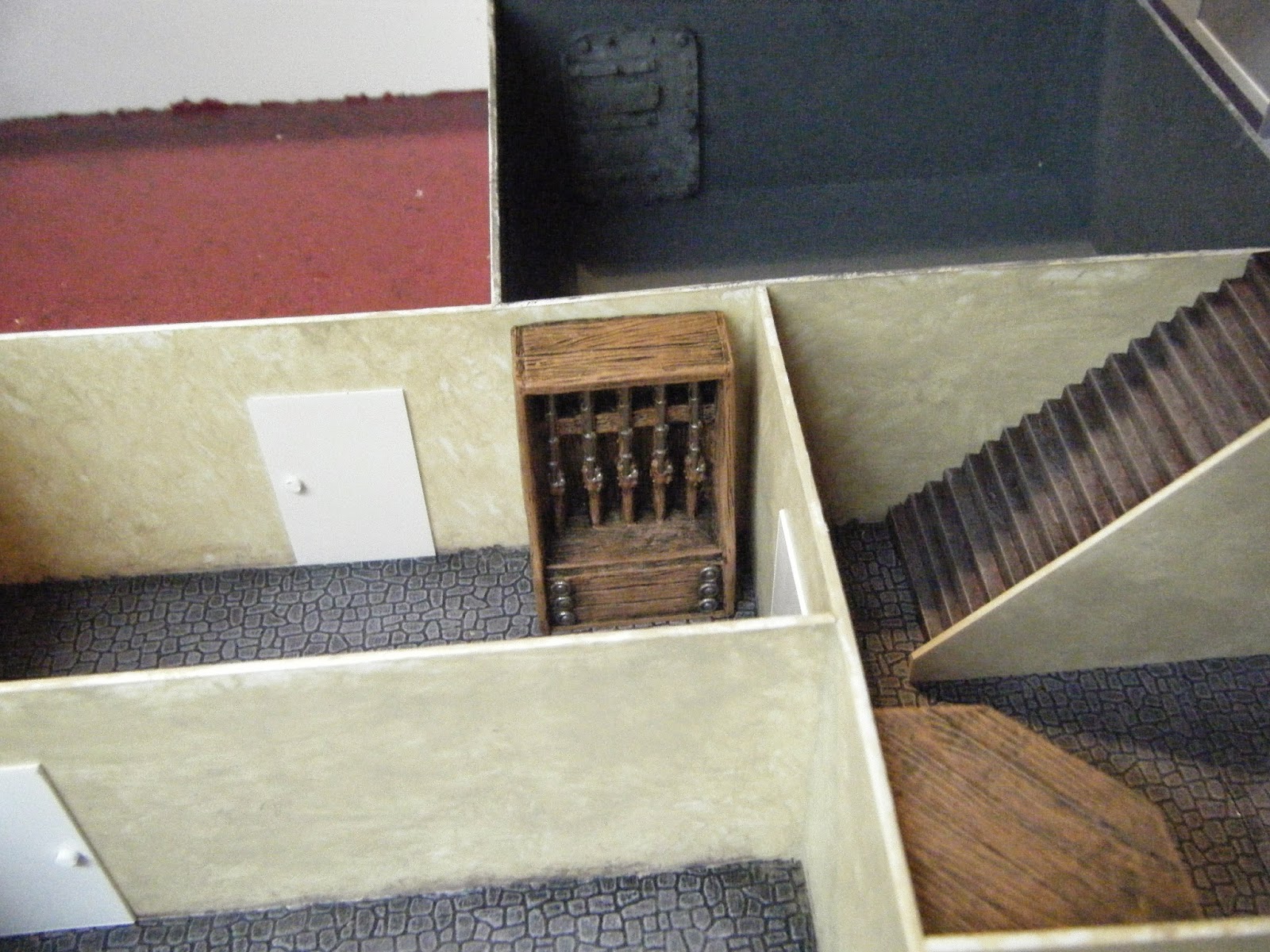 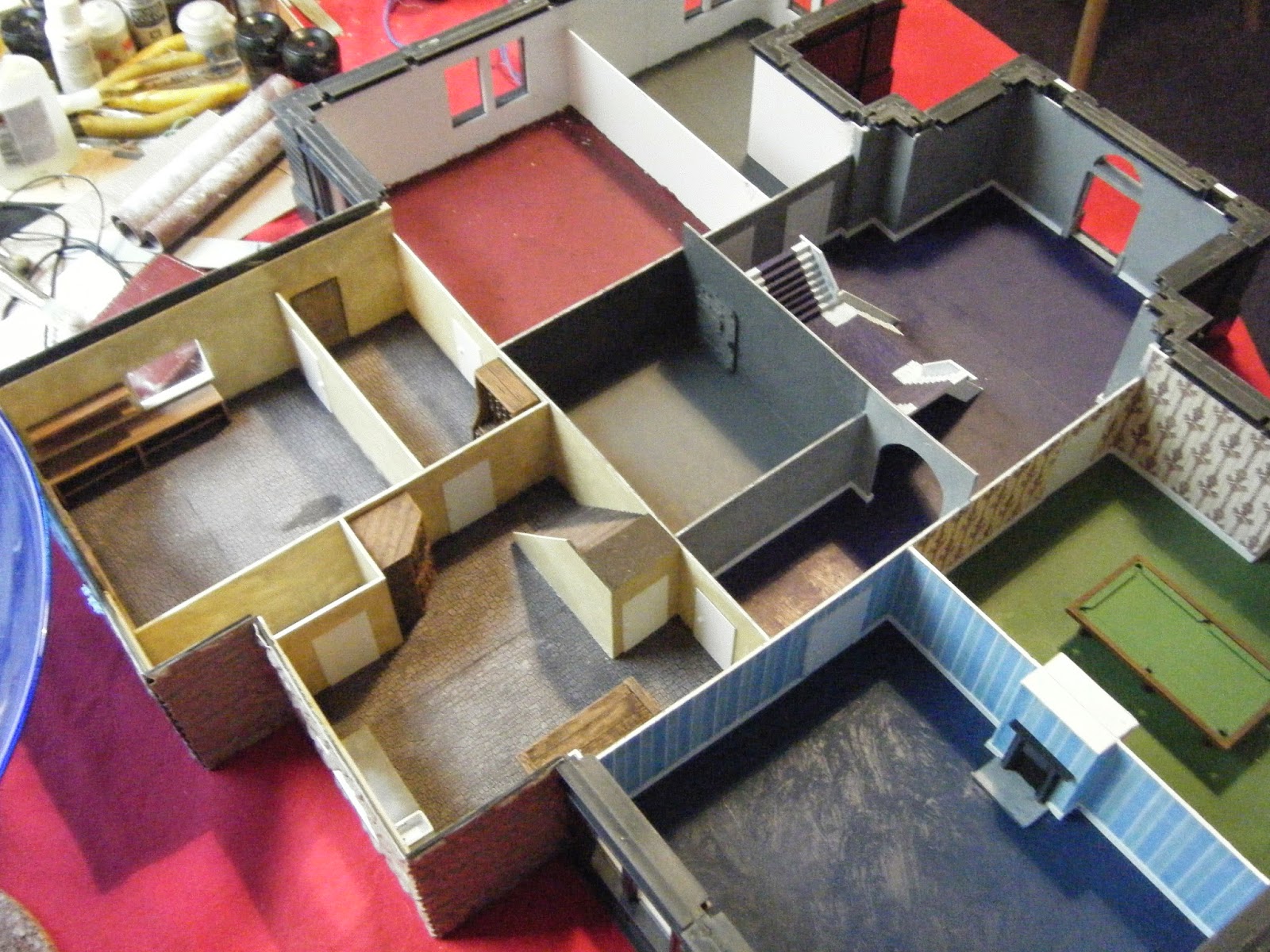 I got hold of some furniture. Most of these are from Thomarillion. I have a load of bookcases as I thought I'd make one of the rooms a library/office. 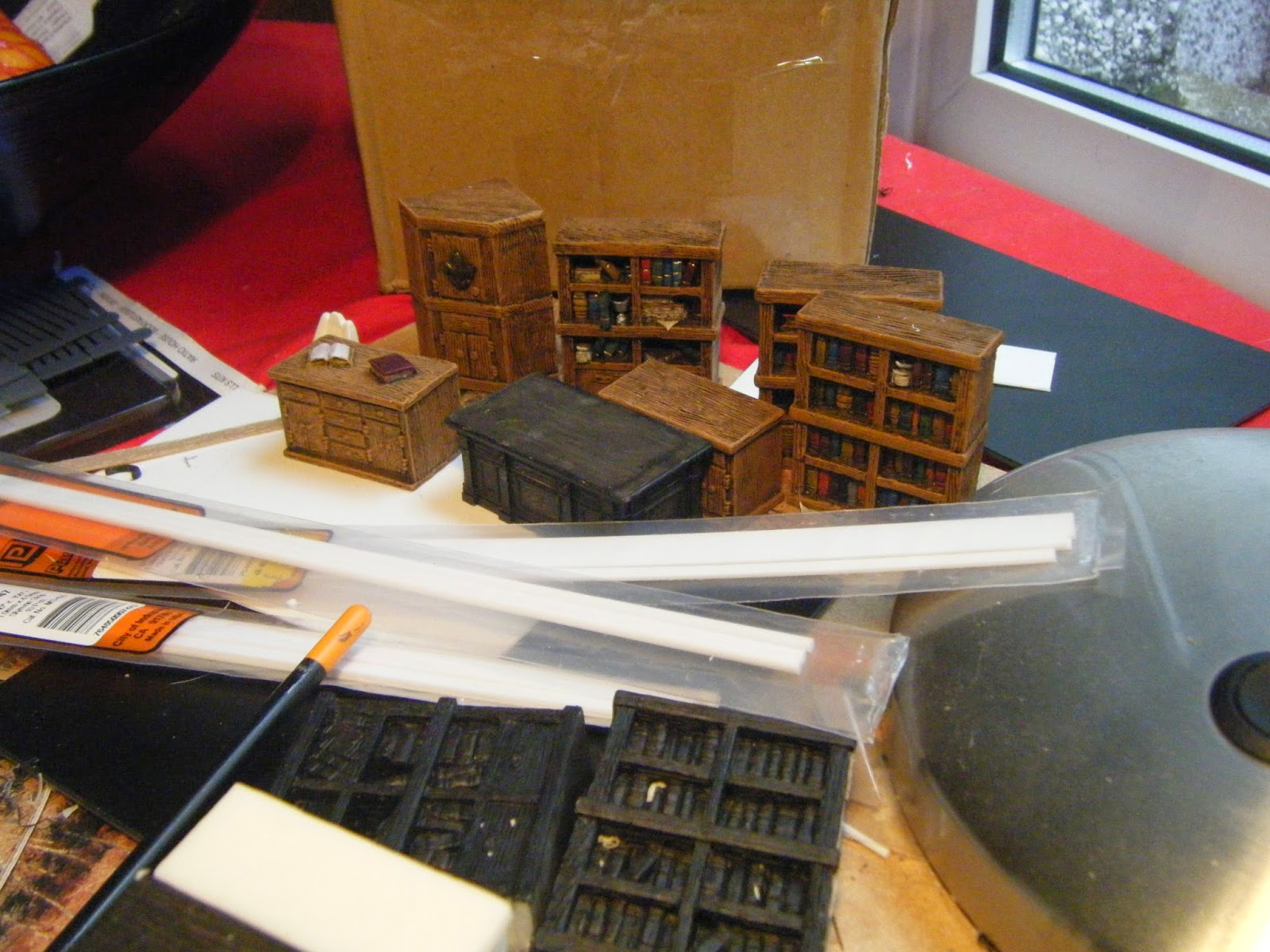 I also started a little formal garden what those nobs sometimes have. 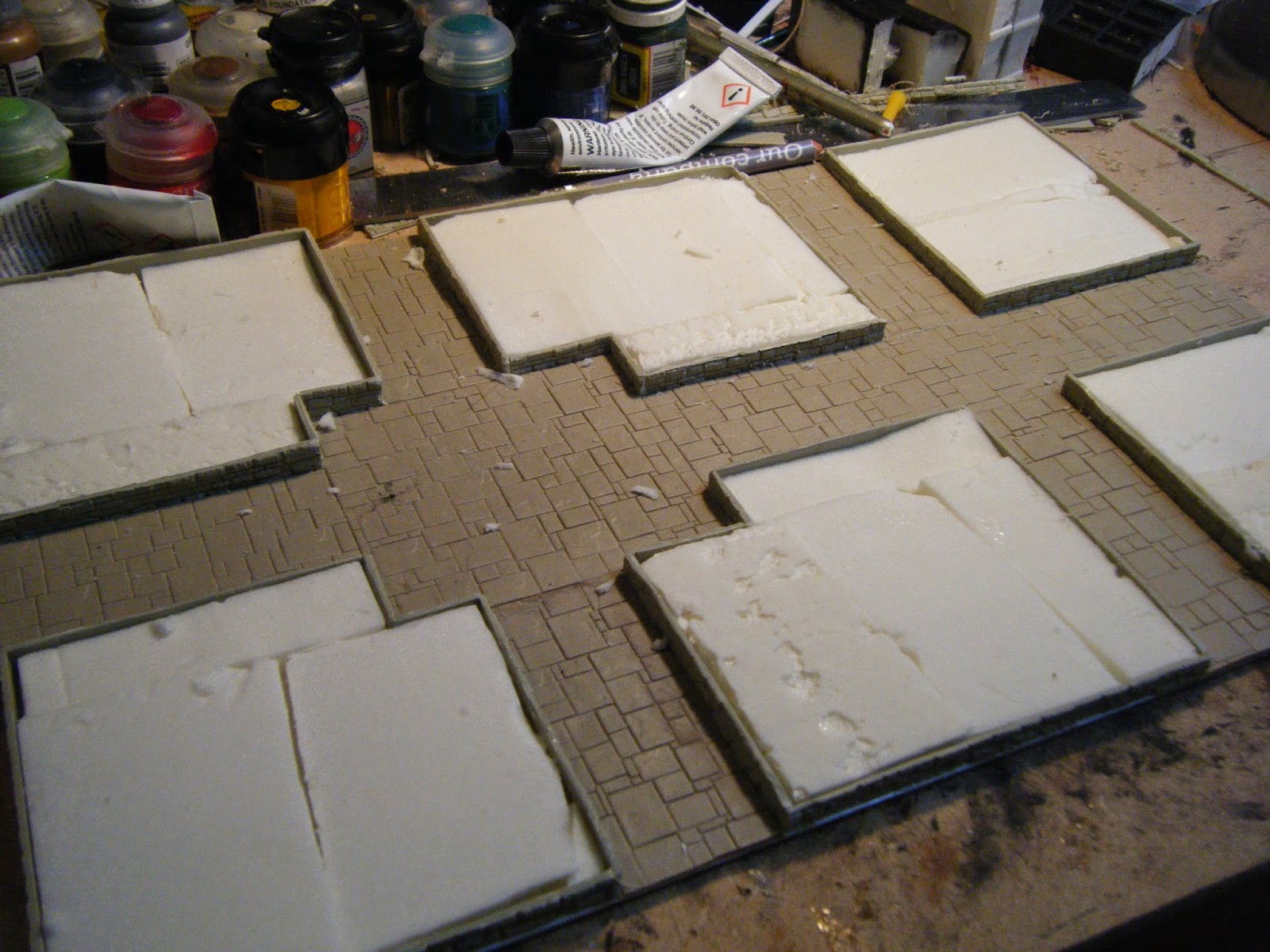 So, I just plonked the seven heroes in the middle of town and grouped the goblins around the edges. For a start 7TV doesn't really work for seven heroes because the activation system pretty much insists on leaving a few extras behind. So, I gave five of my guys the Leader (1) Talent. It feels a bit wrong, because they're all individuals and not really led by anyone, but it's a way to activate them all. Another way would be pairing them off into sidekicks, but again no verisimilitude, and also it's asking for trouble when those pairings take casualties. I did consider a new Talent 'Egotist' where that character doesn't contribute towards activations, and also doesn't require them. 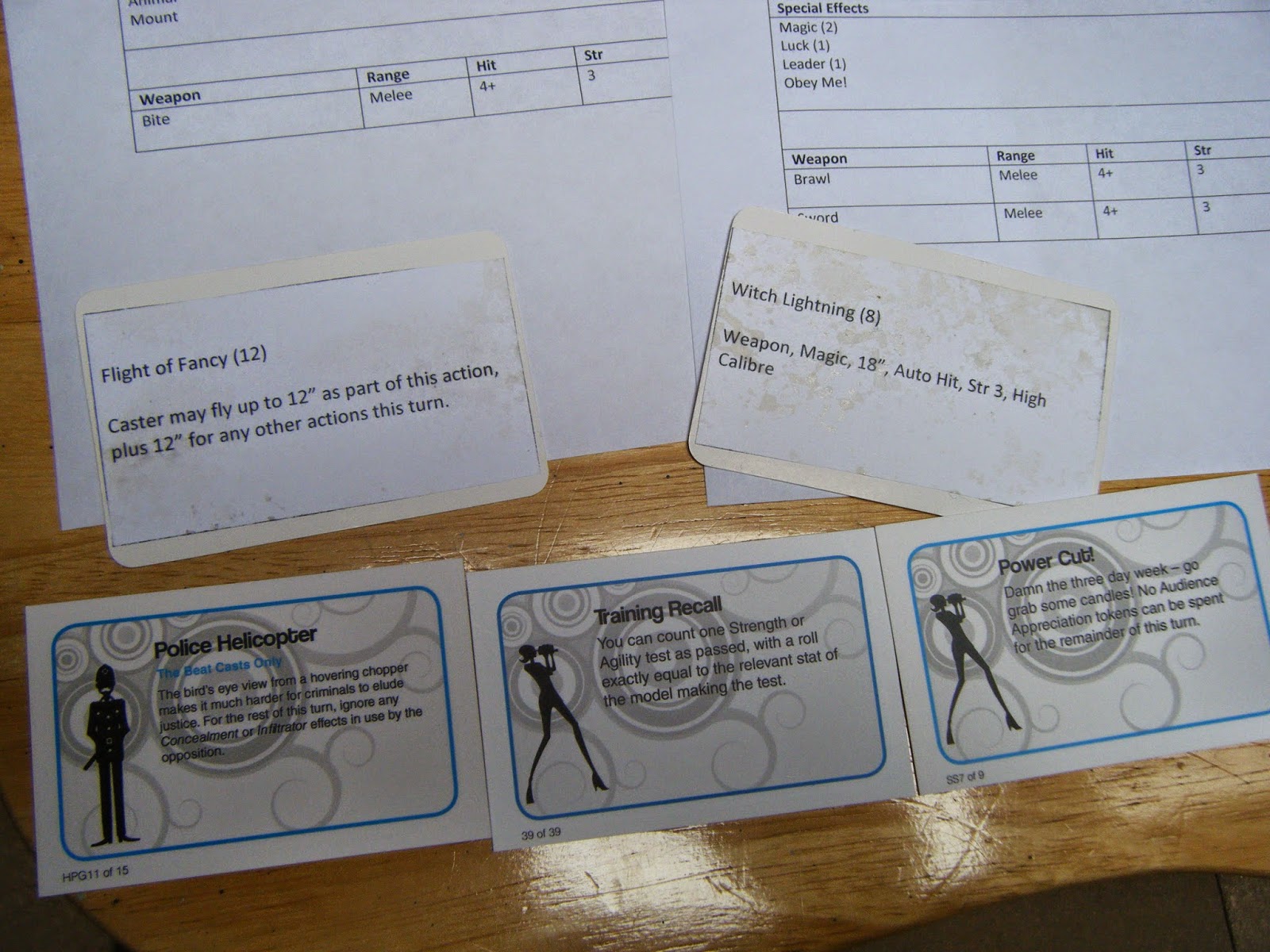 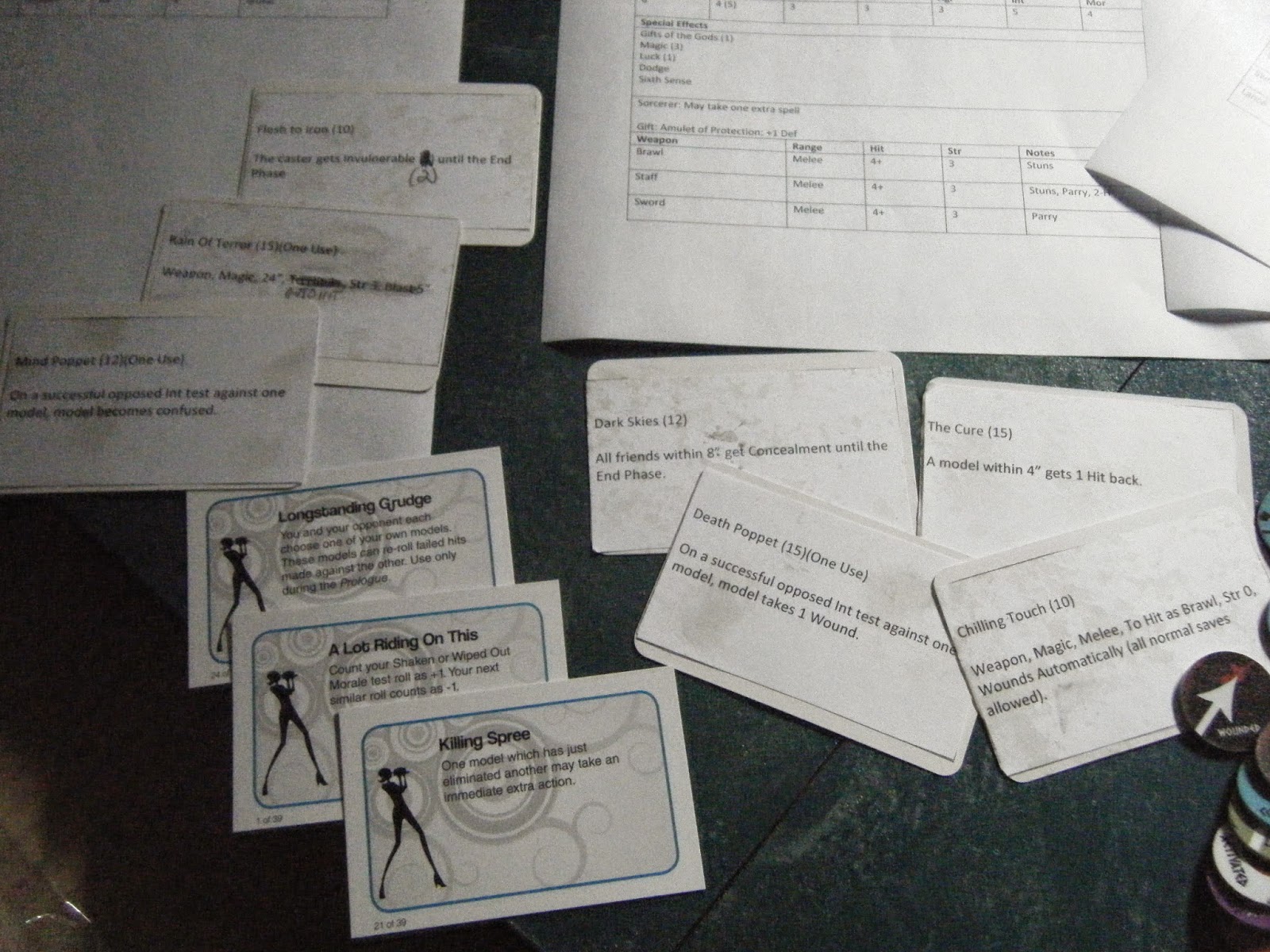 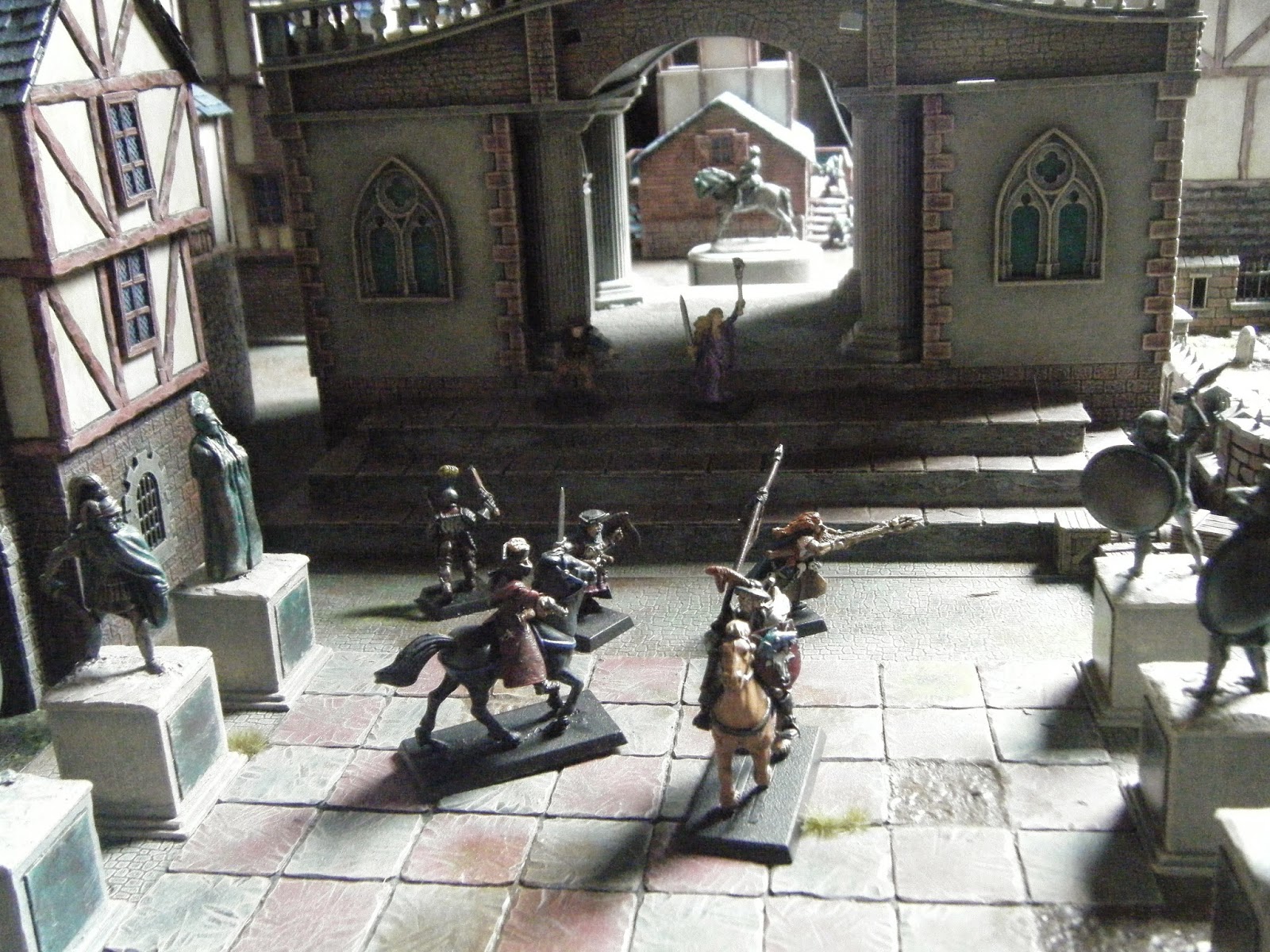 For the first turn the goblins advanced a bit timidly. I thought I'd try to keep them together in groups in order to mob the heroes if they got a chance, but mostly coz it's easier to keep track of. The plan was to try to get as many goblins into combat in one go as possible on one front, and then do the same on another, instead of dribbling them in gradually. 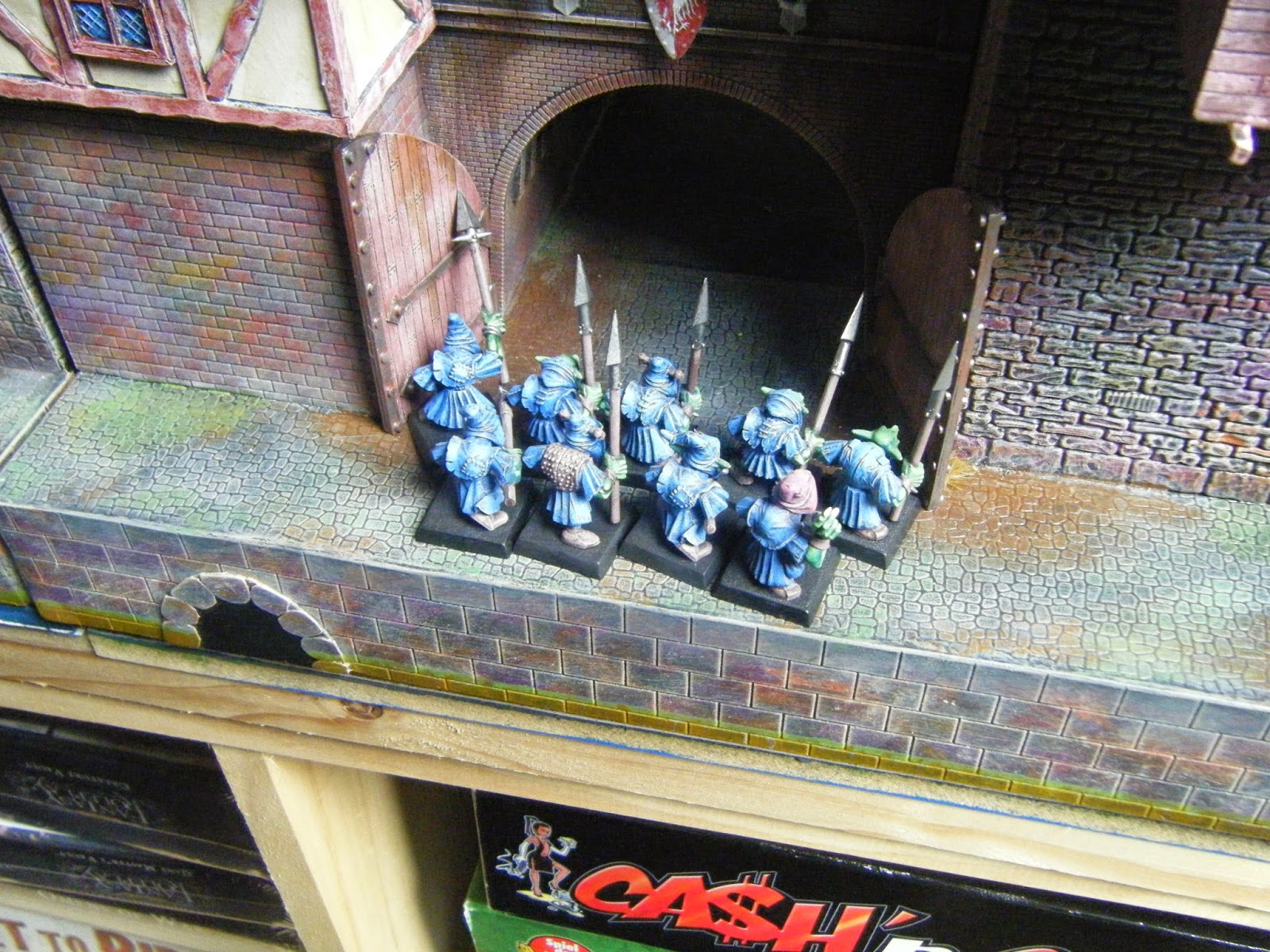 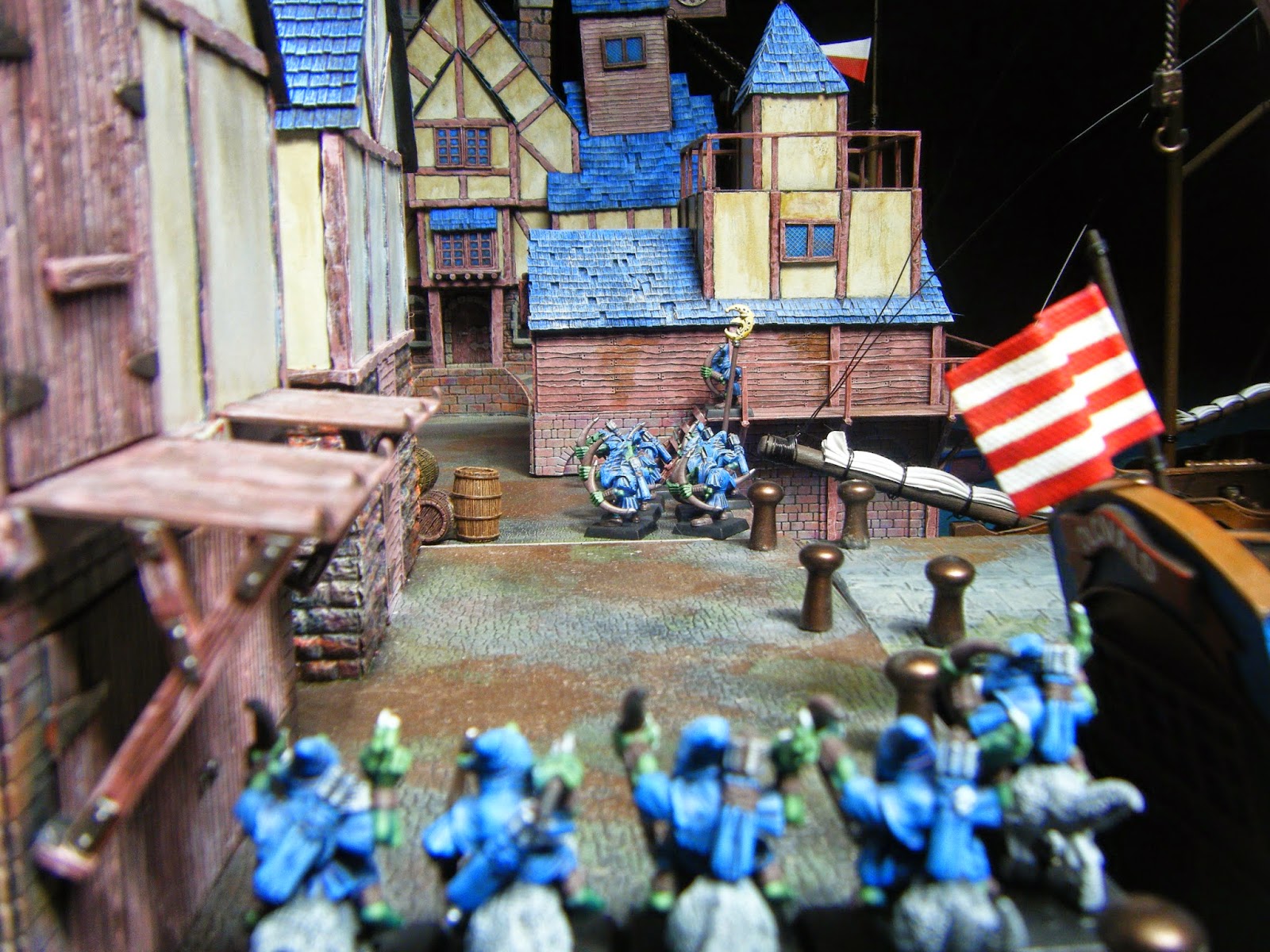 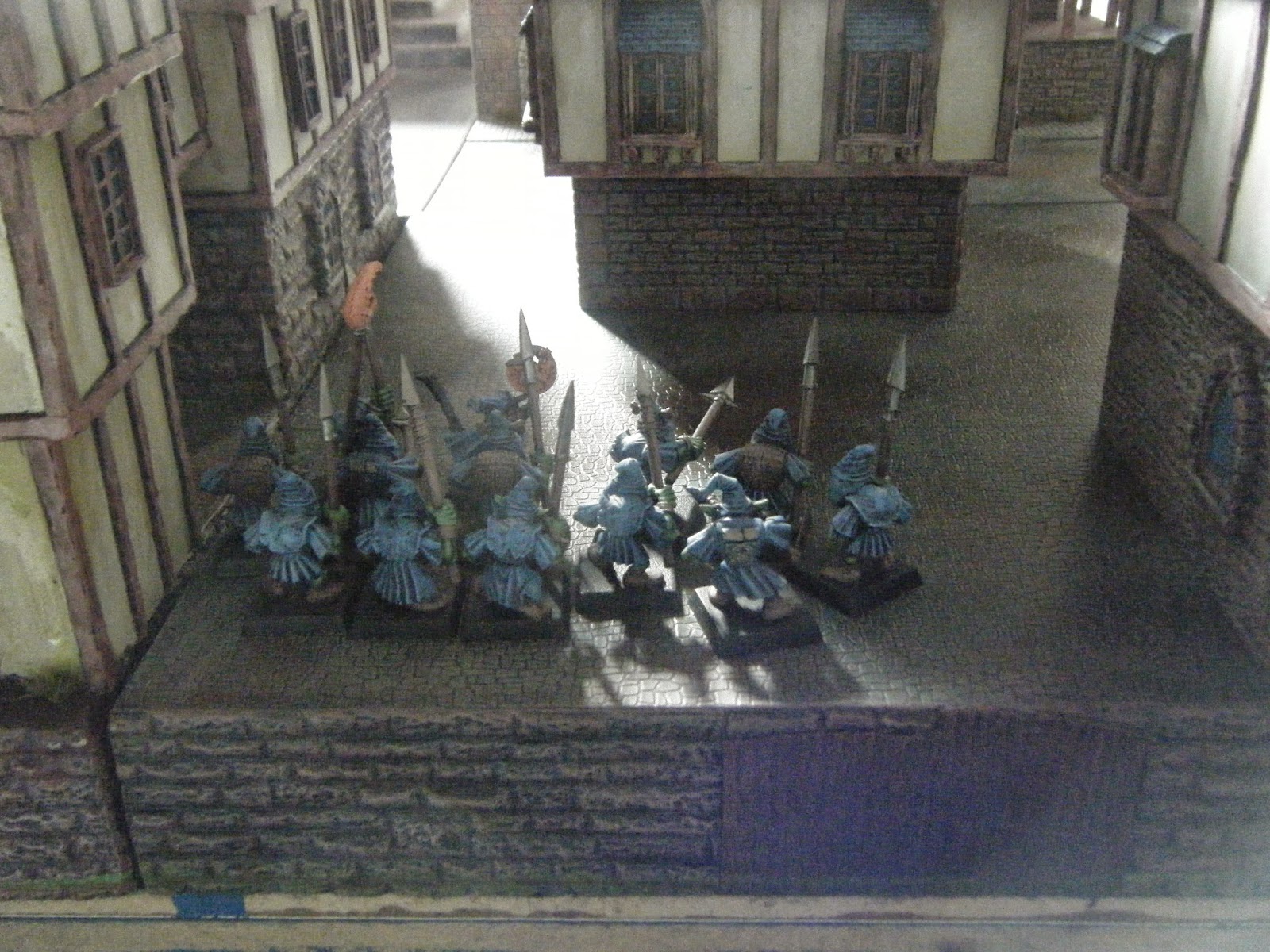 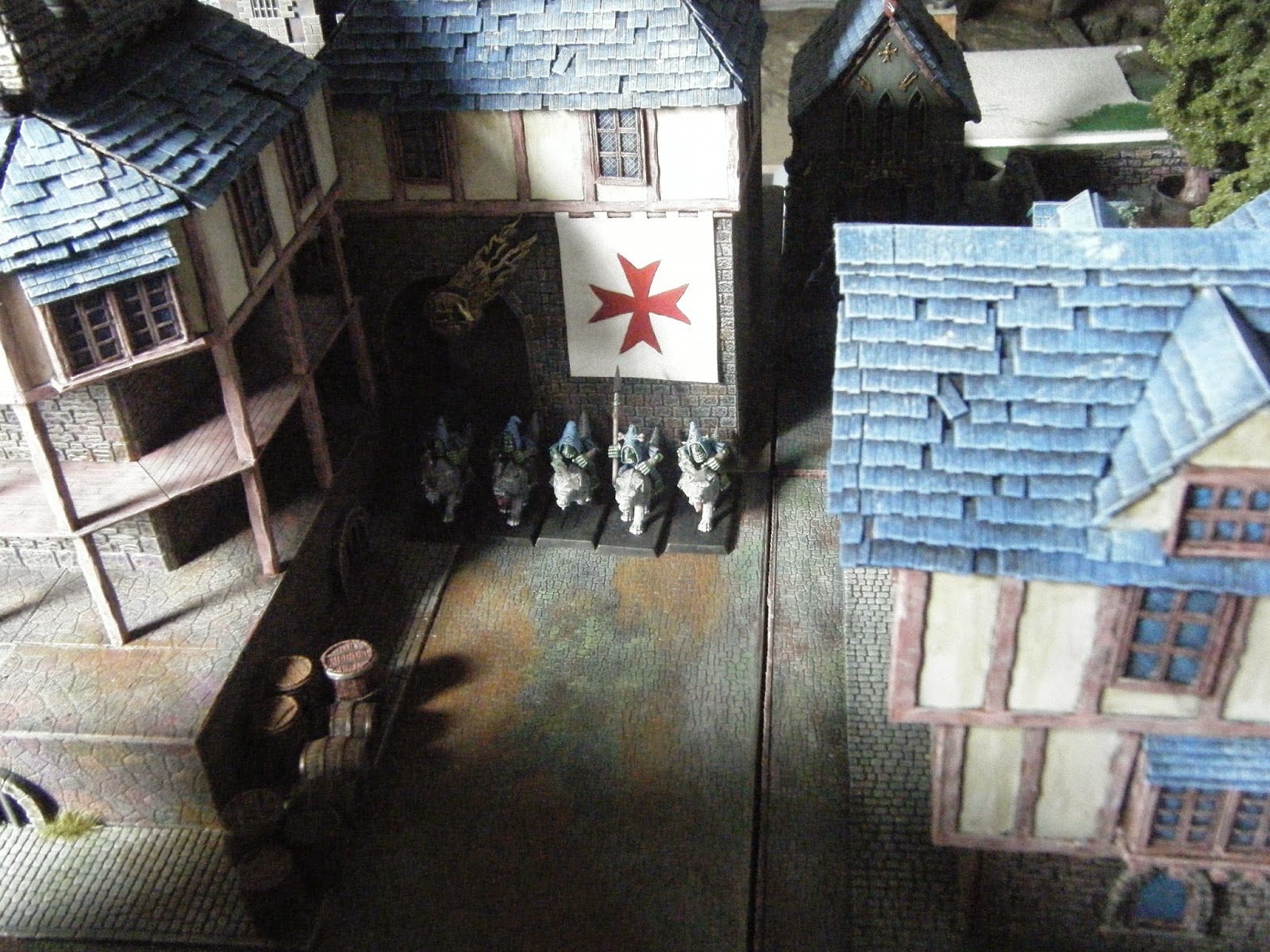 First go for the heroes, the highwayman rode through the market and shot dead one of the wolves (he was aiming for the wolf!); the freelance charged, took out another wolf, and then Raged a third. 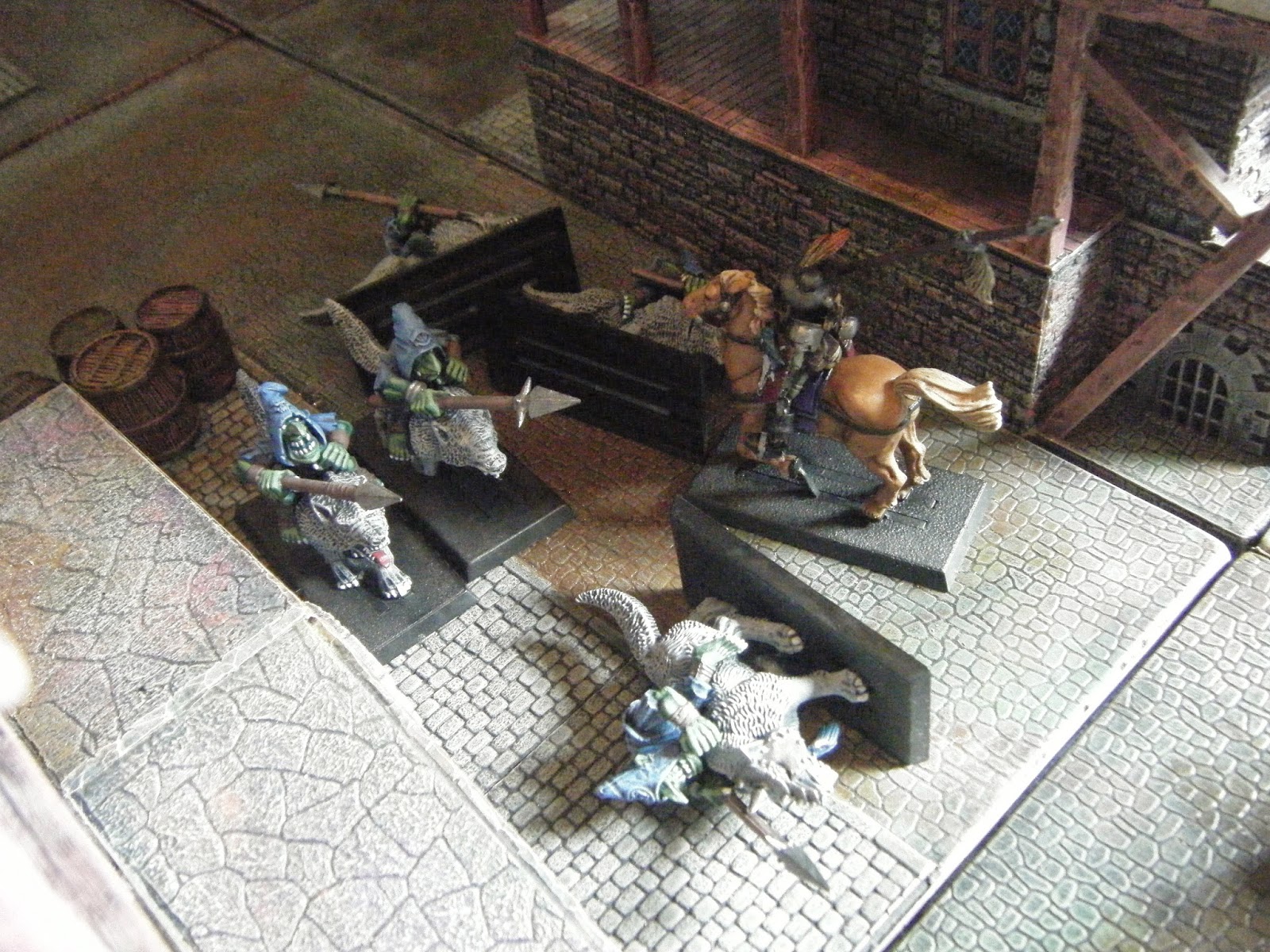 The pistolier managed to shoot a goblin, and so did the crossbow guy. The earth wizard took advantage of the stupid grouping of goblins attacking the temple and Rain of Terror-ed four of them. Then the sorceress Death Poppet-ed a wound from the goblin shaman. A pretty spectacular death count for the first turn. 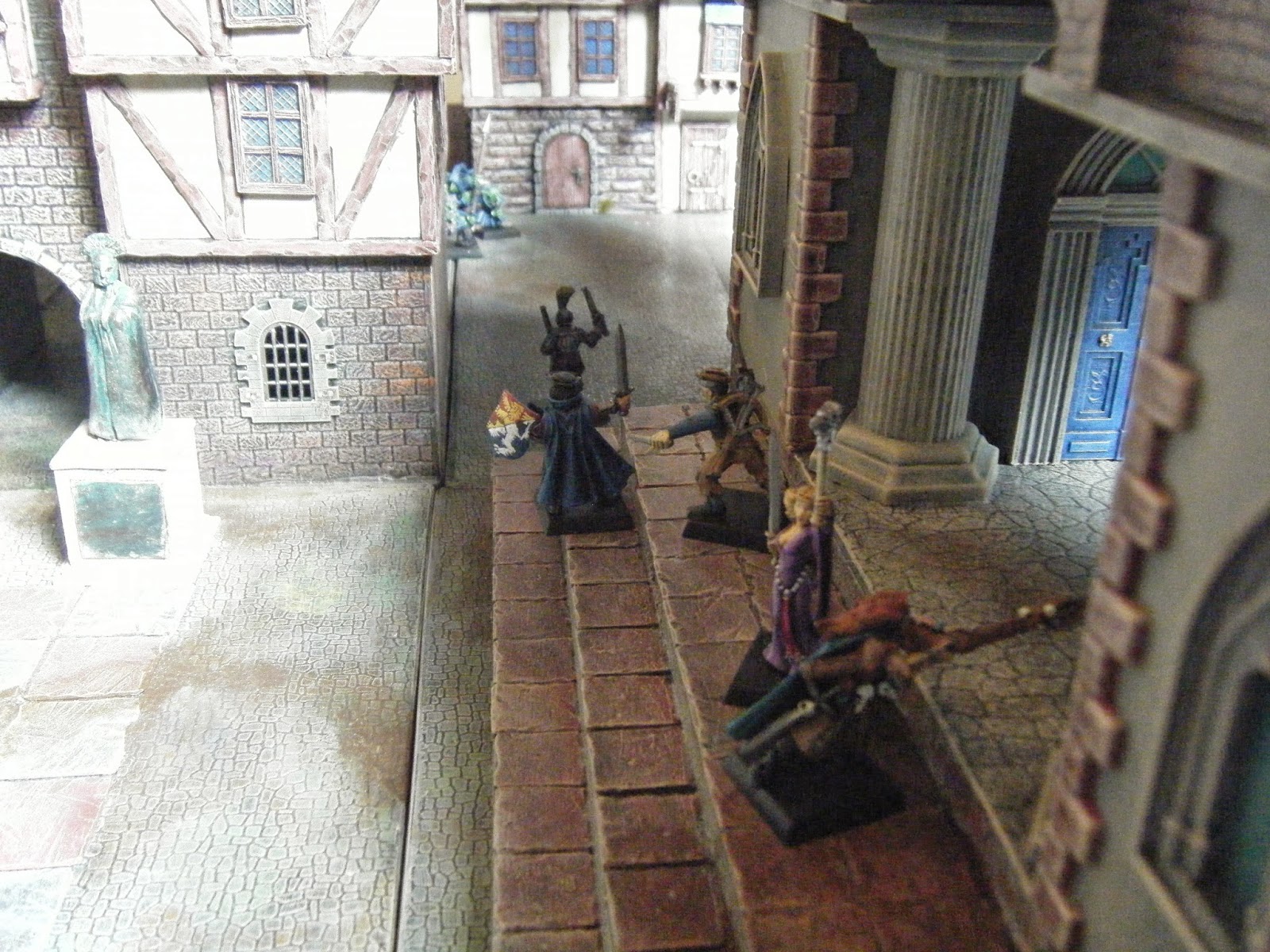 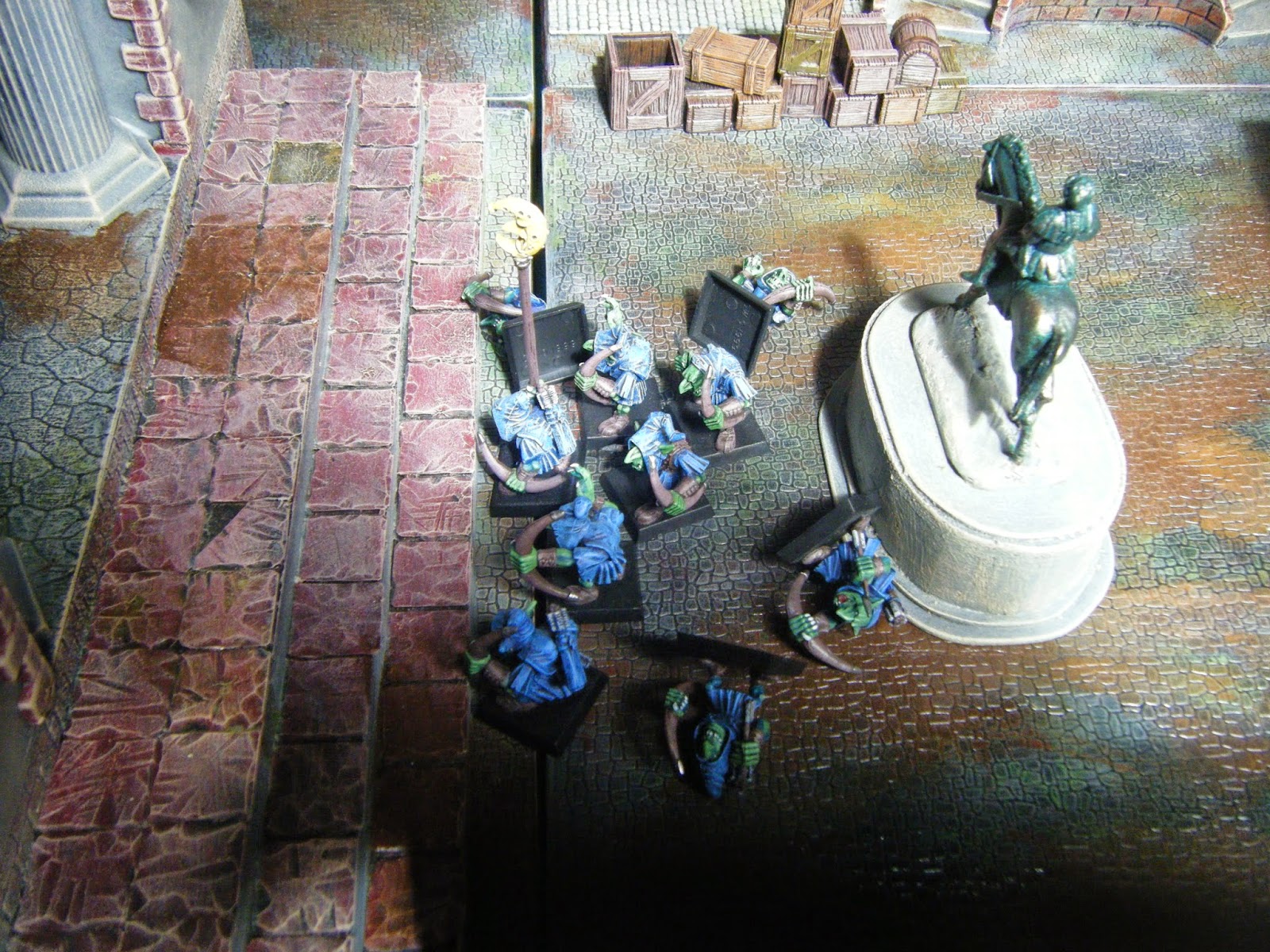 The heroes won initiative for the second round and just continued where they had left off. The pistolier and the crossbowman killed another goblin. The freelance and the highwayman managed to kill the last two wolves and one of the riders. 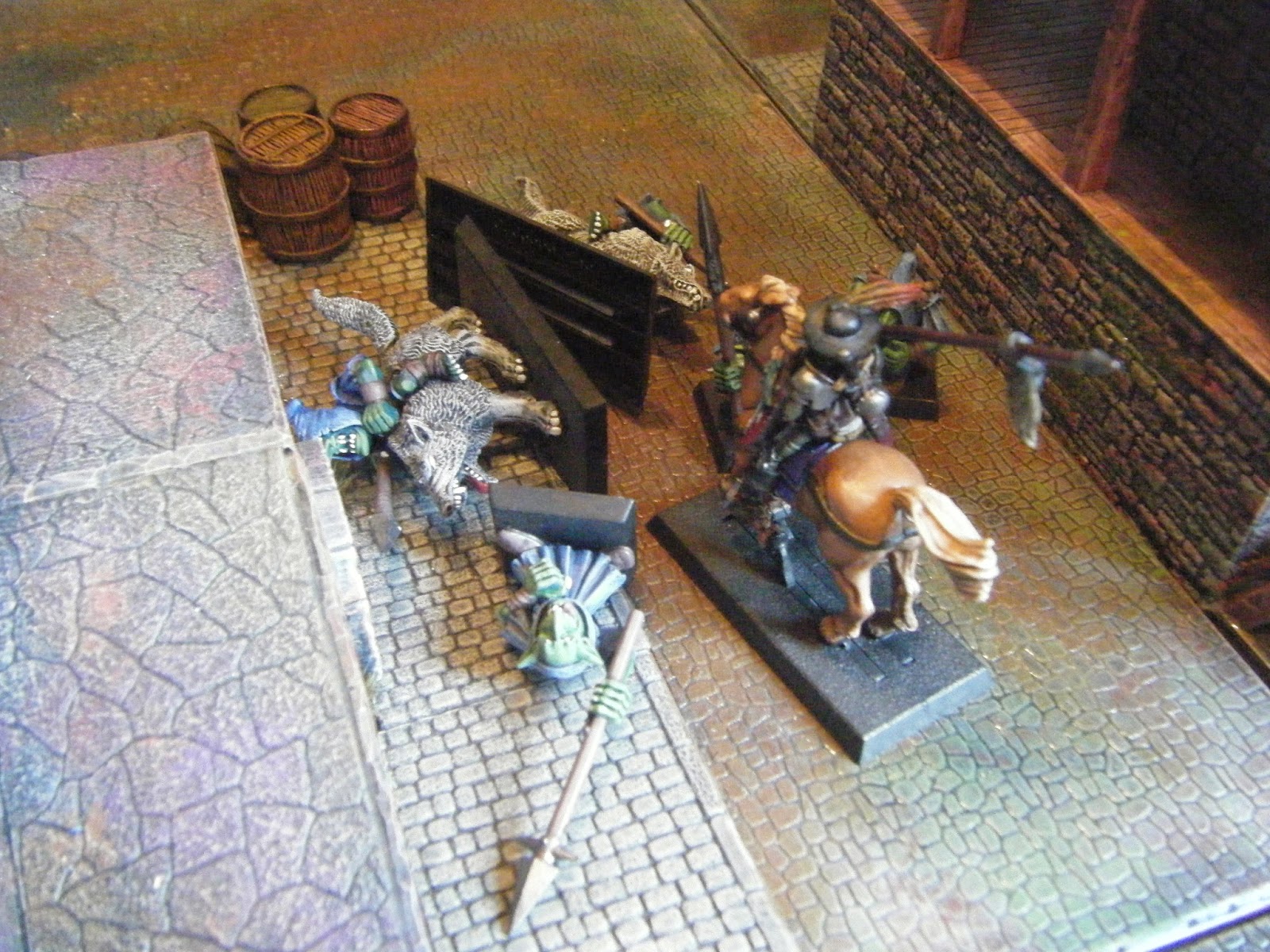 Without too much to do, the sword and shield guy went to stand in the middle of the square to intimidate the shaman and his mob. 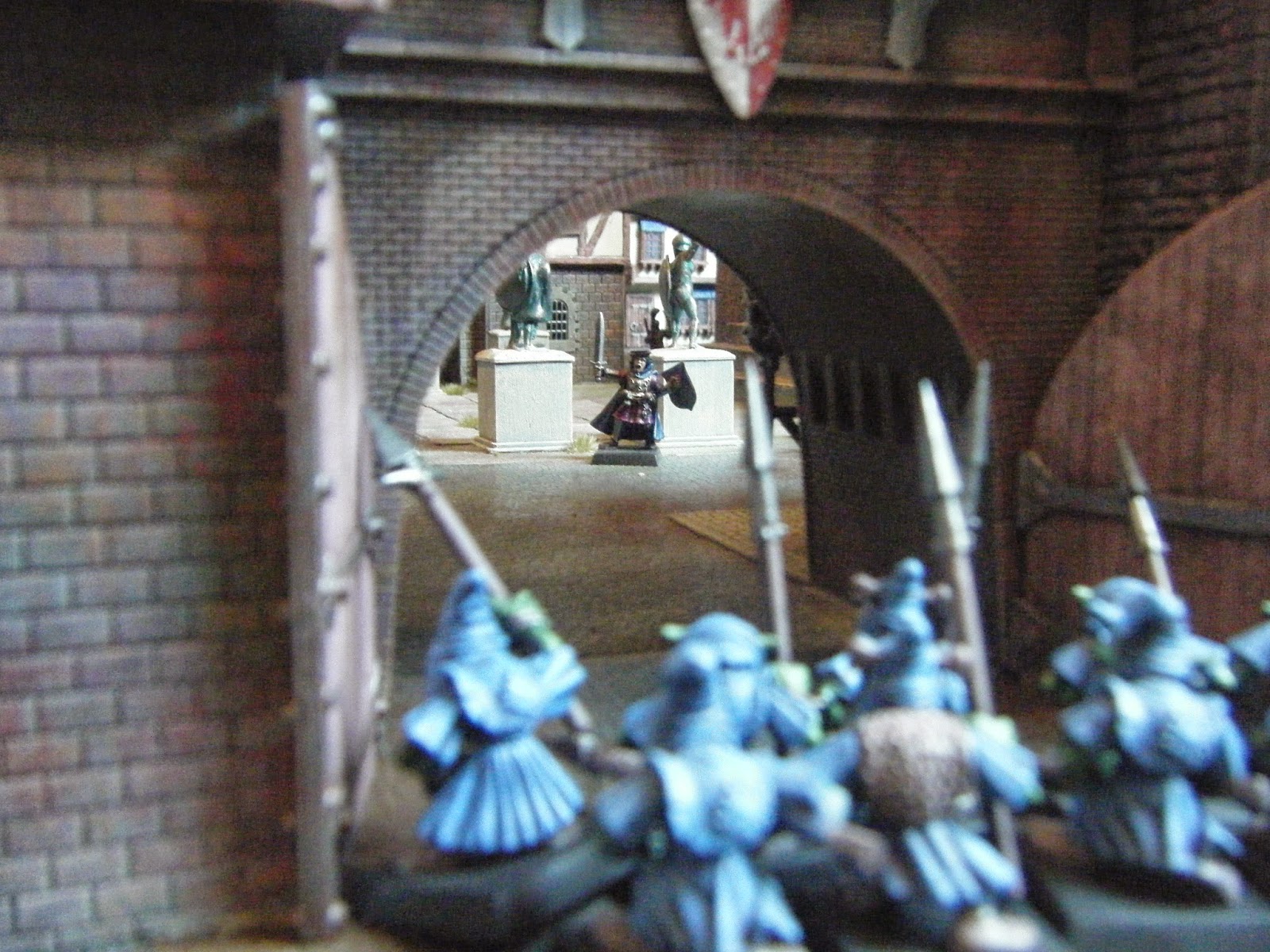 The earth wizard cast a spell to confuse the archers' standard and the sorceress cast a shadow over her and her colleagues giving them Concealment (that's why they're not in focus). 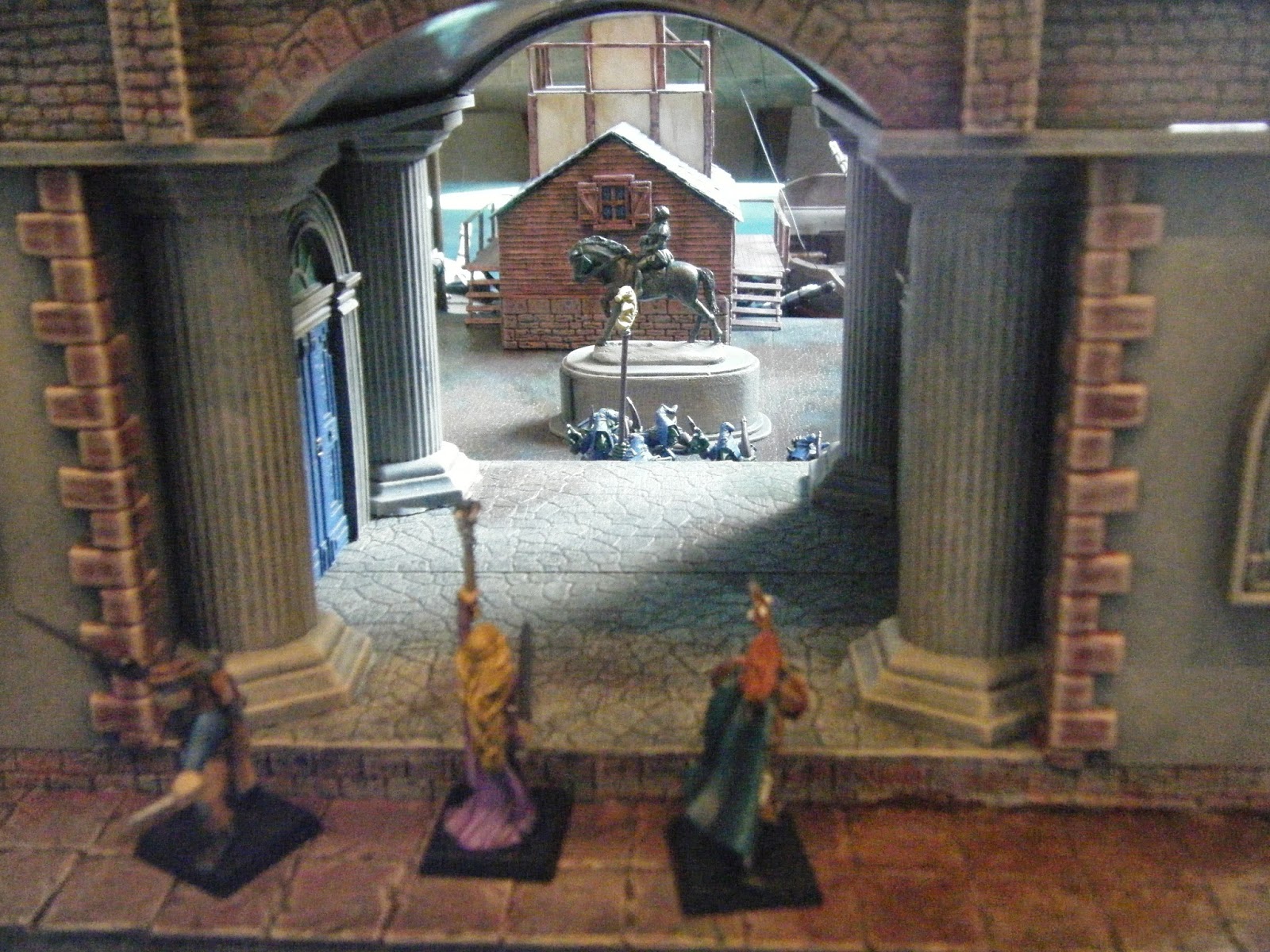 So the goblins finally had a chance to strike back. The wolf riders (sans wolves) piled into the freelance but any hits they got on him were deflected by his armour. 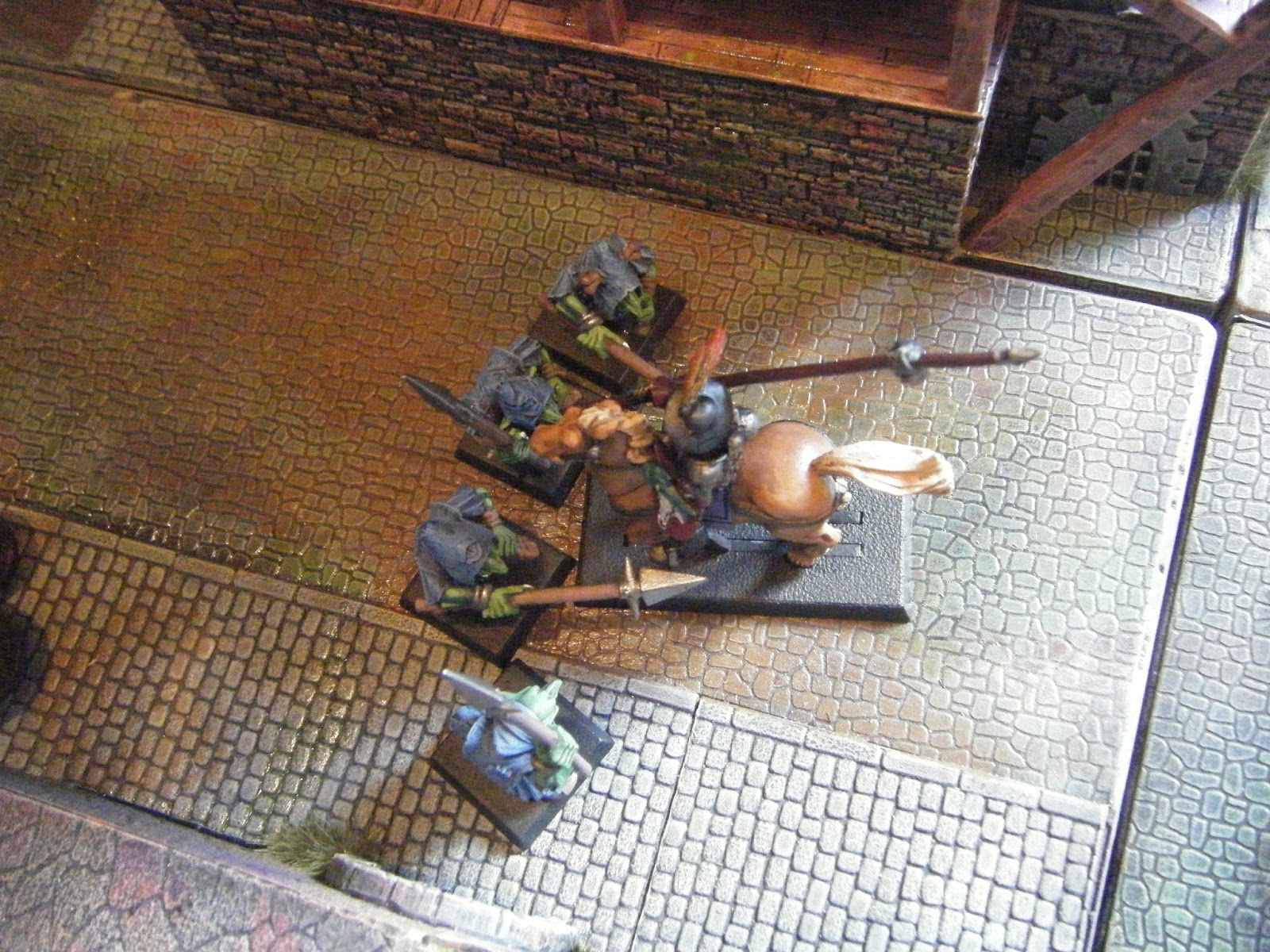 The archers piled into the wizards coz it was too dark for them to shoot. They managed to give a wound to the earth wizard. 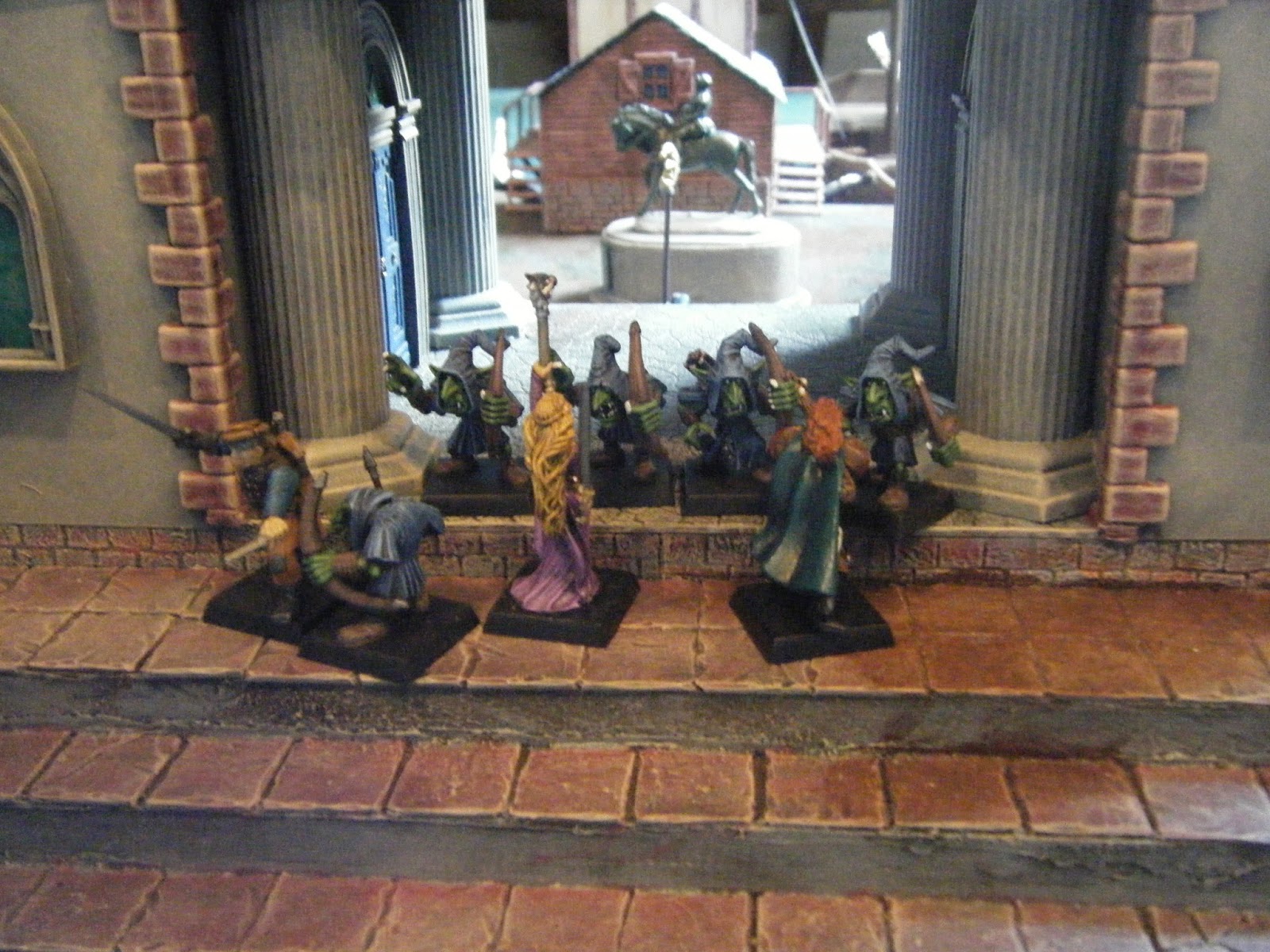 The goblins with the chieftain totally mobbed the pistolier but only managed to do one wound. 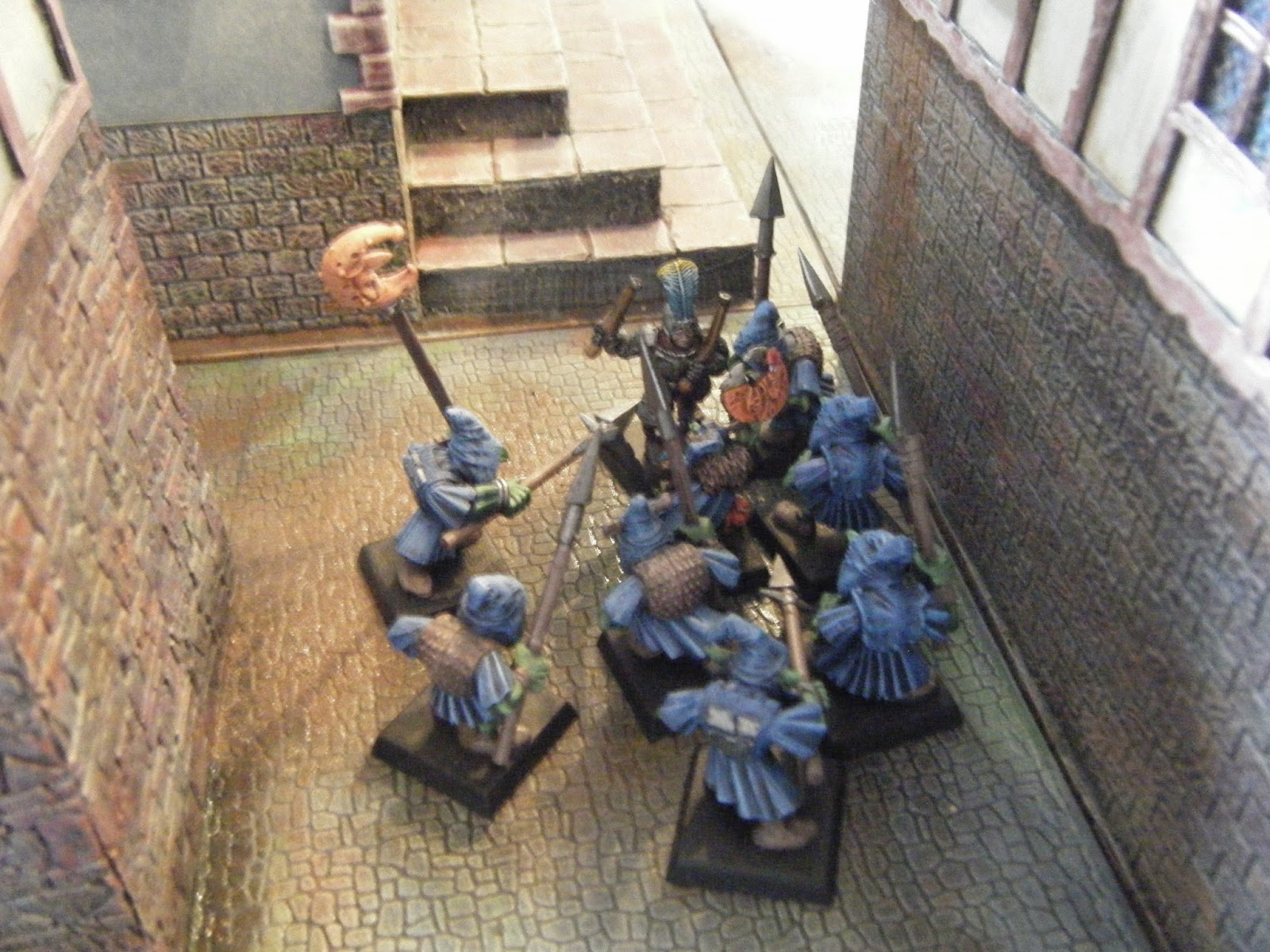 And lastly, the wolf archers got to do something. They went for a canter in the graveyard. 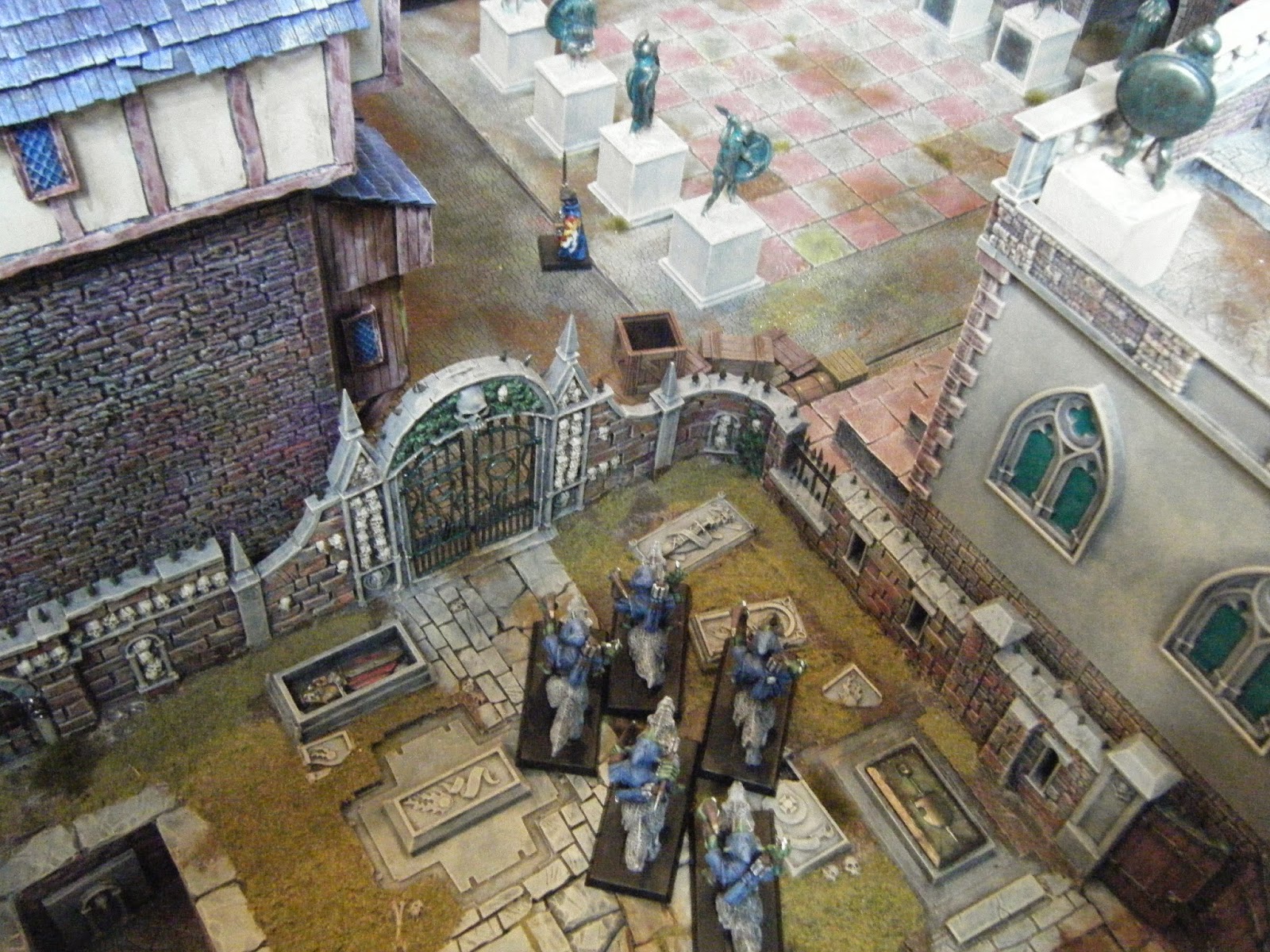 The goblin standard passed his status check and so was no longer confused, and the goblins won the initiative. Pretty much the same stuff happened during the next round. The four goblins piled into the freelance and got a few hits, but the bloke's armour saved him a few times but he still took one wound. The goblins continued to mob the pistolier. They got 4 good hits on the guy but he saved three of them through his armour. The goblins in the temple would have hit the sorceress and the crossbowman but for their Dodging. And they managed to do a second wound on the earth wizard. 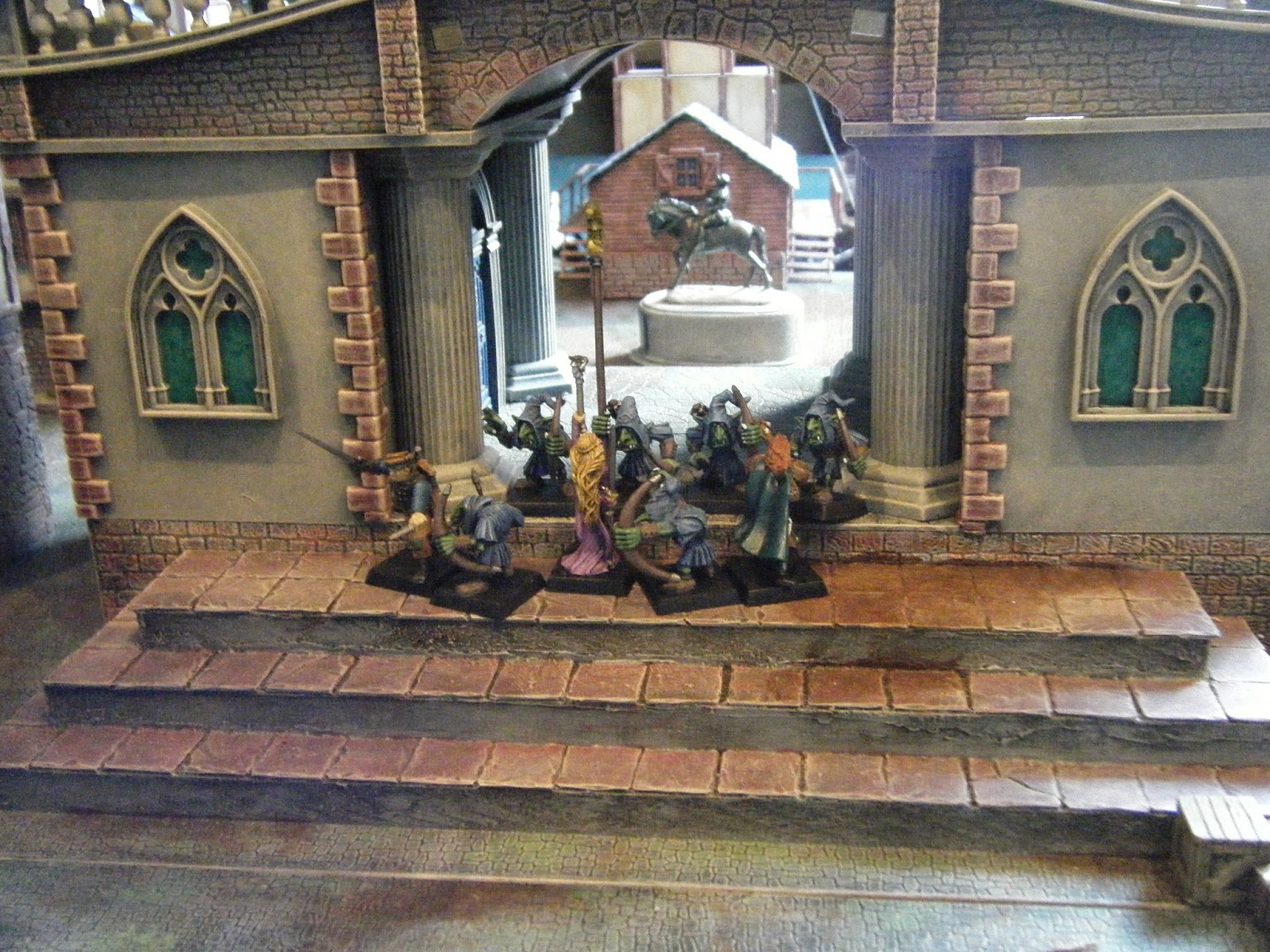 The wolf archers decided to charge the sword and shield guy (it makes sense statistically though it makes you wonder why they bothered practicing all that wolf arching). They got about five hits on him, but all except one was saved by the armour rolls. 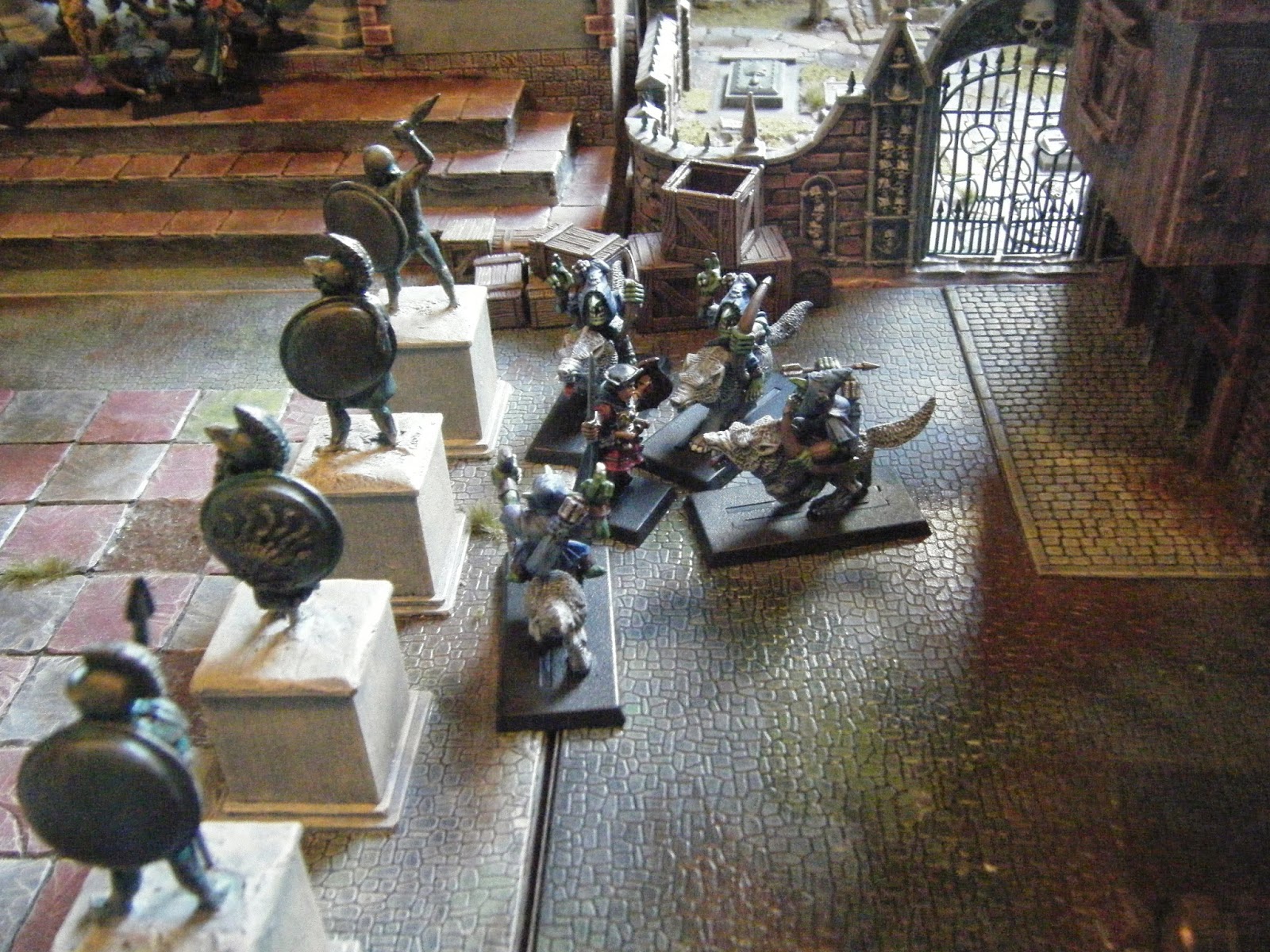 So, when discussing this sort of fight with my opponent, he did suggest that it would not be very satisfying, and it might just turn into an attritional dicefest. And that's exactly what happened. The game bogged down into one mob vs one hero, where the mob were waiting for their 5s and 6s and then the hero tried to save them (Dodge or Armour, etc). And the hero can only clear the goblins at a certain speed, two per round if they hit with everything. And there is very little dynamism in the interraction between the two sides.

It made me think that 7TV doesn't work with these sort of armies, and its not supposed to.

And so I walked out the cinema.

So, I'm very pleased with 7TV, generally (Best Game Ever), but I've been wondering how it deals with severely unbalanced casts. It works great with 3 or 4 Stars supported by 6 to 10 Extras, but I thought I'd replay the Magnificent Seven in Moedlhafen using mostly 7th Voyage.

On the one side there are 7 top spec Stars, all vying for camera time and the best lines, while on the other I have 40 goblins (slightly worse than human soldiers) with a goblin chieftain and a minor Shaman just coz we need to have some speaking parts.

I am kinda expecting the Stars to get massacred just through sheer weight of dice rolls, which would be a rubbish movie, but we'll see what happens. 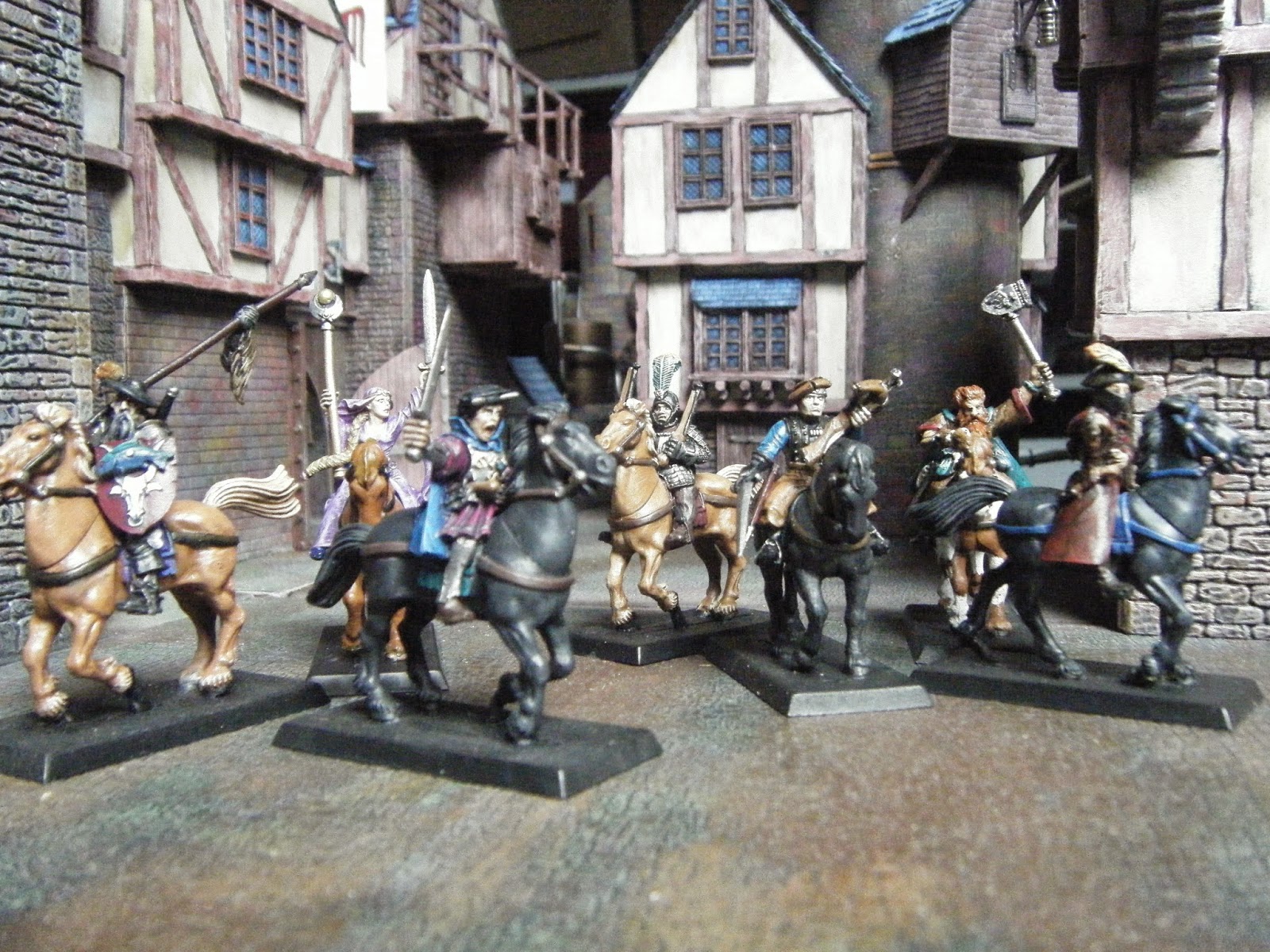 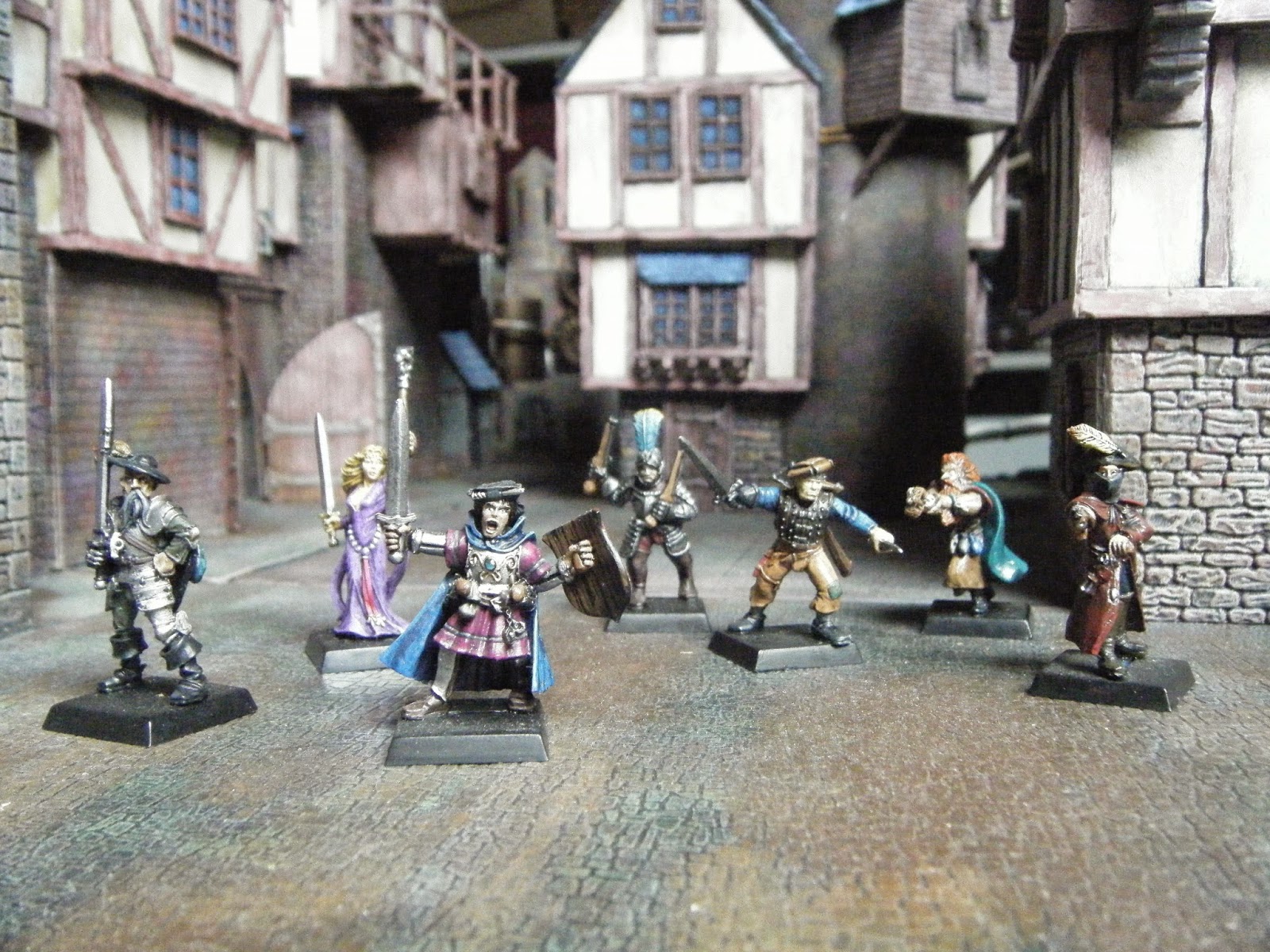 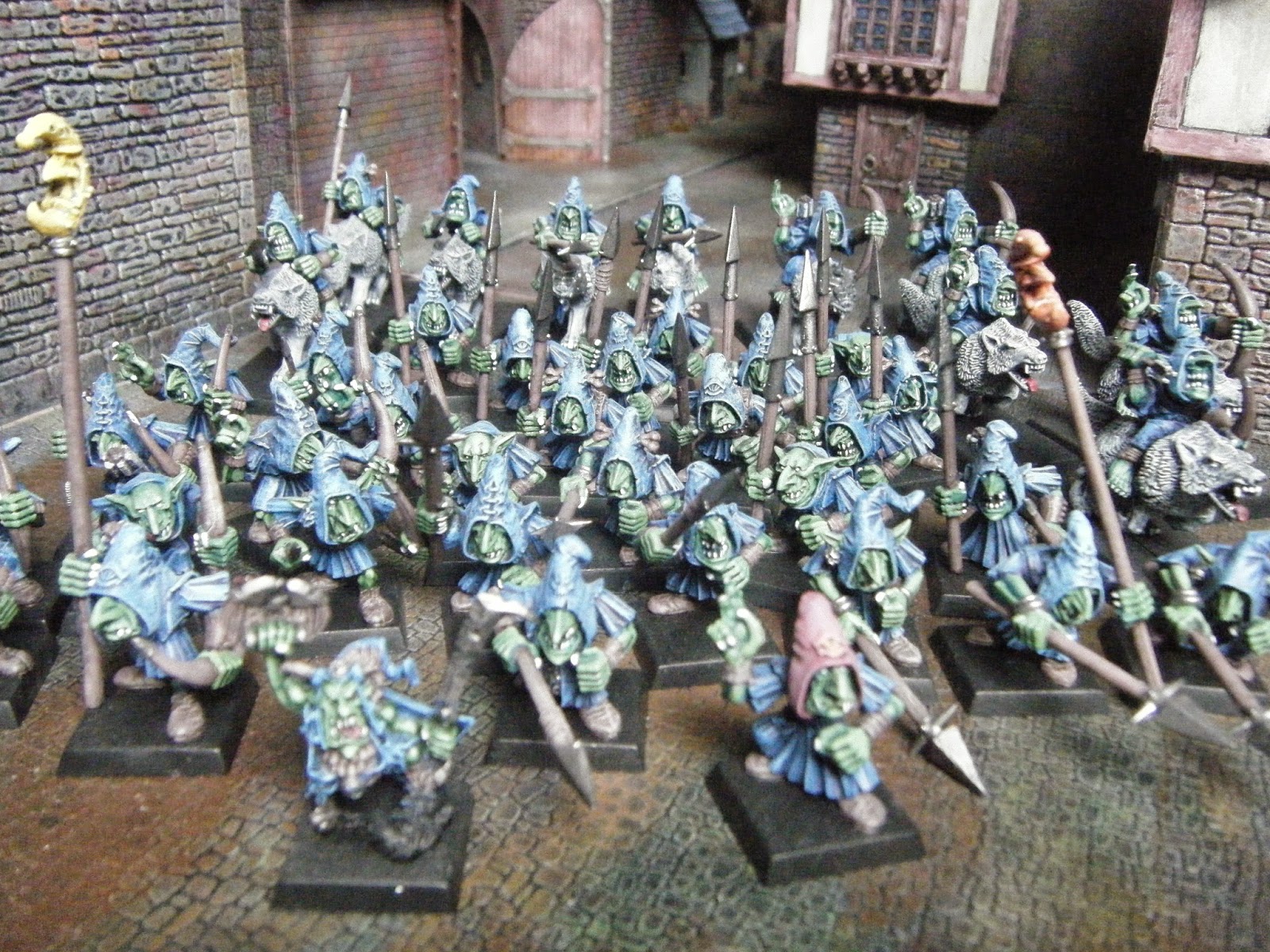 Posted by Monkeylite at 08:10 No comments: