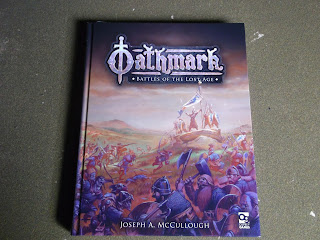 I ordered Oathmark as soon as I heard it was out, and it arrived yesterday. I've had a look and started playing a test game with myself this morning to get the hang of the rules. Not sure I need to get the hang of it, really, as I won't be playing it with anyone for a while, yet.

I thought this might be a decent addition to my rules, as I don't really have an old school WFB type game even though I have several suitable armies. I was a bit disappointed to find that the game only covers elves, dwarfs, humans and orc/goblins. These are all very similar types of army, in the wider scheme of fantasy gaming especially as they are all given many similar types of unit. I was surprised not to find the undead represented. I also thought it might accommodate building your own forces so I could make customised fantasy armies, but you only get to play with the ones you're given.

I imagine the publishers are only interested in supporting their own figures, as they have a growing range of decent Oathmark plastic regiments, which is fair enough, but seems a bit of a narrow path to tread. I much prefer the angle taken by Saga AoM which seemed to go out of its way to accommodate as many different types of army as it could. 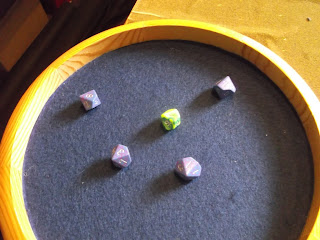 The main (only!) mechanic in the game is to roll a number (up to 5) of D10 and try to get at least one (or in some cases as many as you can) equal to or over a target number. Activation usually involves rolling 2 dice and trying to get the activation number, so an elf might typically try to get a 3, while a goblin might need a 6. If you fail the activation roll you still get to make 1 of a limited number of activations, if you suceed you get to do 2 of whatever you like.

You take it in turns to activate your units, so the order you do this is a key tactical element of the game. This is enhanced by the presence of commanders, so if you activate a commander's unit, it might be able to activate one or two more units to also have a go before your opponent can react.

Unit's stat lines have the feel of the old GW ones, with a line of about 9 stats with a list of special abilities and equipment. Sometimes you can fiddle with these, for example, when giving a character a horse or wolf to ride, but they don't really come with any options, except the size of the unit you want to make with them.

So, if I wanted my Goblin archers to shoot some Human spearmen, I might look at my Shoot stat (1) and deduct it from the Spearmen's Defence stat (9) to leave me needing 8s. My archers are in a unit of 15 which gives me +2 for ranks, so I would actually need 6s. I roll 5 dice coz I have a unit frontage of 5 * 1 Combat Dice figures, and any that get 6 or above cause a hit, which will result in the death of a spearman. Actually, I'd only roll 4 dice, coz I think the spearmen have 1 level of Shielding. 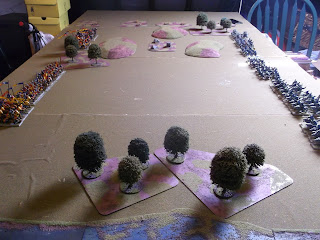 I was gonna play the whole battle out and make some sort of review and battle report, but I was just left unenthused by the game, and so I won't bother. I feel like there's such a lack of the fantastical in the game it feels like an historical game that has been given magic and dragons. The fantasy feels very generic, which could of course be appropriate for a generic game, but as this is dedicated to a figure range, I feel like they could have given us some interesting setting. If they want us to make the setting and story up ourselves (which can be, of course, a good thing) then I feel like they should have let us make up our own units up as well.

Sometimes, the scant setting details we are given do not match the stats. For example, we are told that Goblin Wolf Rider Scouts move quickly even through difficult terrain and are generally stealthy. Under the rules, however, they are the same speed as Human Heavy Cavalry, they have no special rules for moving in difficult terrain, and they have no special rules for being stealthy. 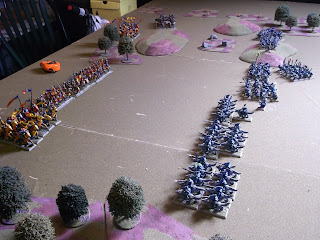 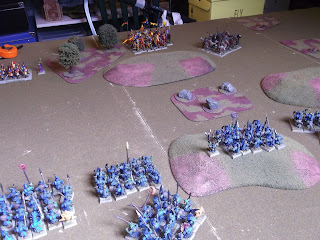 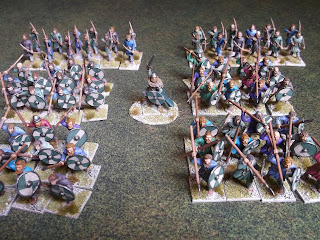 I can now pit these guys against my Scots army. I played a solo game to finally settle the greatest wargaming question of them all, which is better, not England vs Scotland, but Metal vs Plastic. There's only one way to find out... 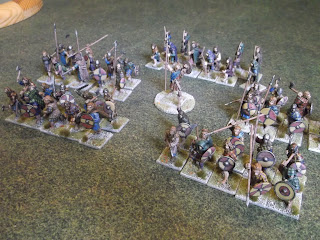 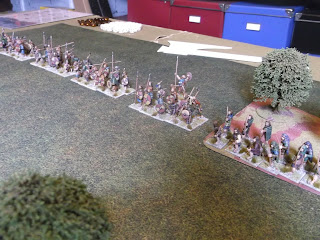 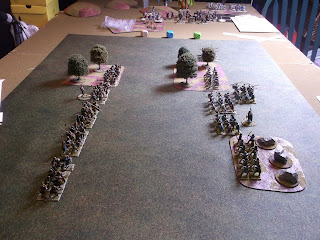 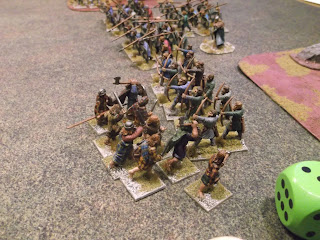 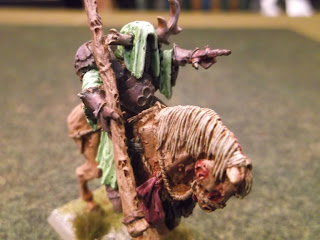 So I've recently been painting some more nurgle followers to go in my Carnival of Chaos (is it an act of appeasement?). I've also ordered some more carnival types to go with these and got some Plaguebearers, too. I'm thinking I might make some more caravans, as well, and see if I can turn them into some sort of AoM warband or maybe a force for Dragon Rampant. 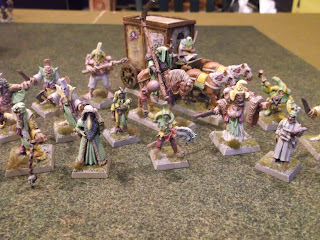 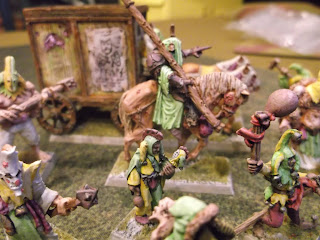 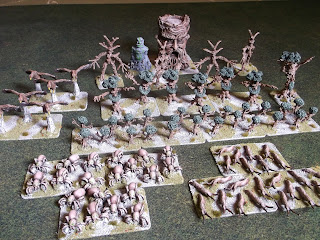 I've added some spider and slug swarms and an arcane artefact to finish my tree army (coz they're so much easier to paint than the Elves). This one is unusual in Sword and Spear as none of the units can benefit from being stacked with leaders (Beasts and Large Beasts) and some (Swarms and Monsters) that don't care about leaders' command ranges. Therefore I decided to remove all Generals and Captains from the list, and give the Beasts steadfast to make up for it. This was actually cheaper, in any case. I have splashed out on magic users to mitigate this, and also get a decent amount of Summoning as I plan to summon all the swarms to the table. 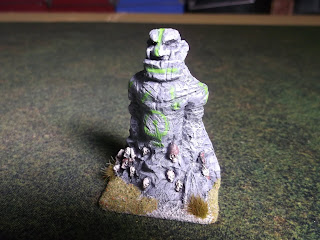 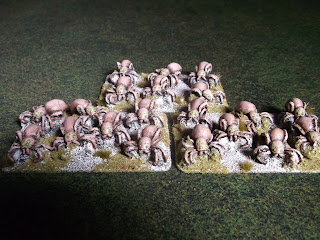 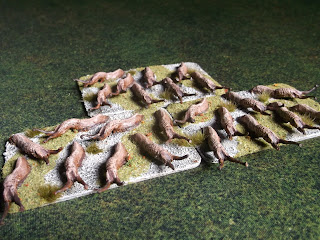 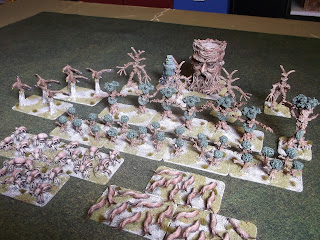 I also did a base, well a tent, for my Elves. 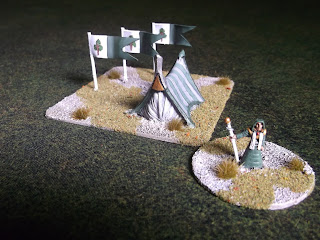 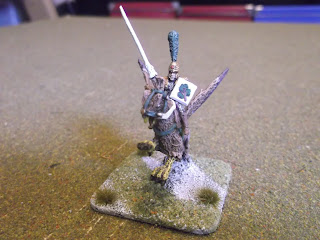 Painted some more Elves and Trees. They got pretty soundly beaten yesterday. I should have been reported to the RSPB for what I did with my Eagles. I think the Elf part of the army doesn't play well with the Tree bit, so I will be painting more Elves and making a high-discipline elite force from them, and then making a separate, random, low-powered, lots of magic, slug-and-shrub-summoning force from the Trees. 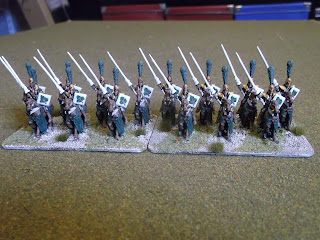 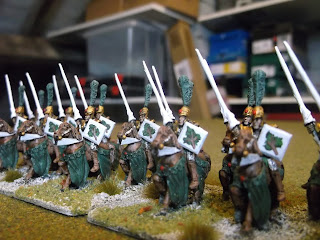 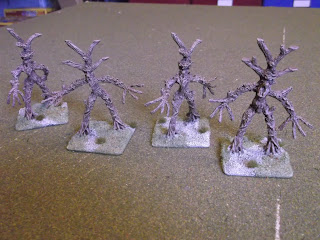 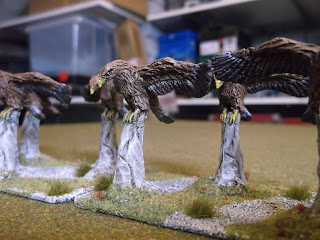 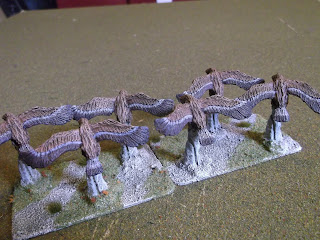 Posted by Monkeylite at 02:33 No comments: