Made some archers for the crescent half of the Crescent and the Cross. May have gone a bit overboard on the stripes. Not really looking forward to painting the rest of the army, if that many stripes are going to be involved. 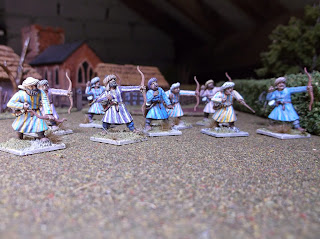 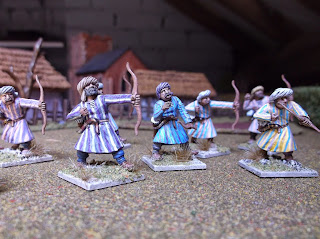 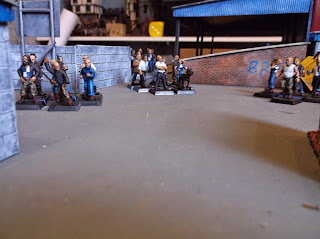 So, the Melchester Headhunters needed to take the Gas objective, the stadium, while defending their own objective, Dave's van. I did wonder what to do, at first, with a bunch of football hooligans. But it didn't take long to get the hang of things. 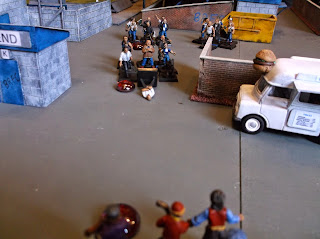 Every time a crew does something, or gets something done to them, they lose a card. It's not really mentioned in the rules, but the best way to think about it, istm, is in terms of fatigue. Istm, though this isn't mentioned either, you need to put down fatigue markers next to your units, otherwise it's impossible to keep track of which unit's done what. 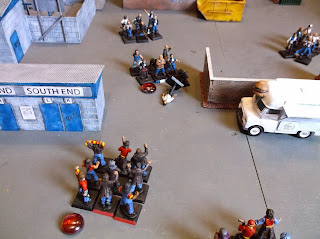 Tactically, the way to go seemed to be to target a single enemy unit and get them fatigued, by taunting or intimidating them by chanting or throwing stuff at them. And then when they were down to minus 3 or 4, hit them with a proper charge from a fresh unit, and kick their heads in. 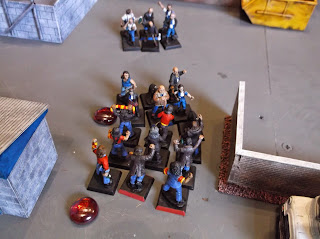 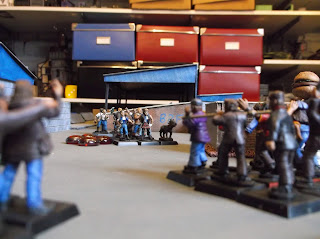 On the second turn, the Melchester van turned up, which gave them a bit of an advantage and they all but destroyed one of the Gas crews. 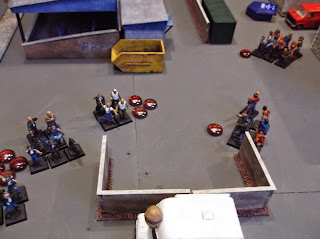 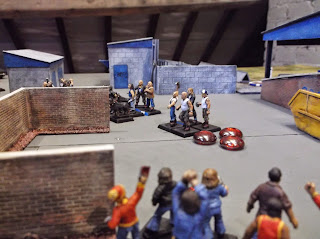 Then in the third turn, the Gas van turned up, conveniently, right next to Dave's van. So they didn't really bother with the ruck, they just climbed over the fence and prepared to defend the van. The objective was worth 15 Cred, which could have been enough to take the victory. 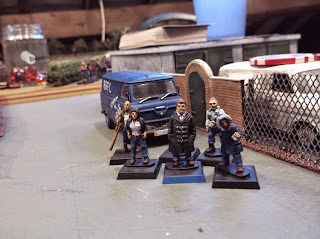 Except, the rest of the GHS were getting their arses handed to them by the bigger Headhunter crews. Istm, that having more, smaller crews might make you a bit more manoeuvrable and flexible, but just sitting there with a big unit, was pretty reliable provided you didn't lose too many figures to throwing attacks. 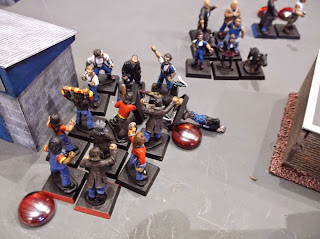 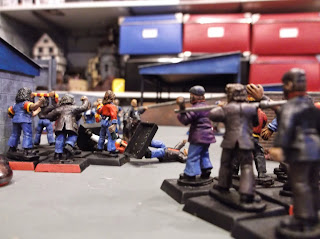 Anyway, we just played through four turns to get a feel for the game, and it seemed to go well enough. We seemed to get through a deck of cards pretty quickly and were constantly shuffling them, so for the next game I'm thinking we'll mix two decks together. To be honest, I'm not quite sure what the game gets from using cards. Istm a dice system would be quicker and easier and wouldn't lose anything from the play. 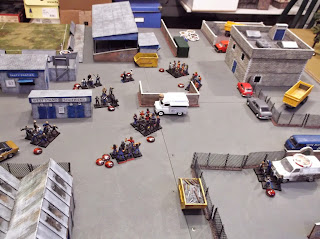 All in all, I'd say it's a relatively fast-moving game that is fun and novel. The theme is interesting to me and a good part of the fun, but I imagine is not everyone's cup of tea.

AGGRO: The Gas Are Back 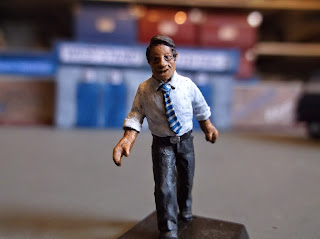 I thought I'd make a bit of an effort to reduce my lead/plastic pile. It suddenly dawned on me, a couple of weeks ago at a bring and buy sale, where I was buying but I wasn't bringing, that it was getting a bit out of hand. So, the first job was to finish my Aggro stuff and actually play the game. I was inspired a bit by a trip to Wembley, and promotion, too. 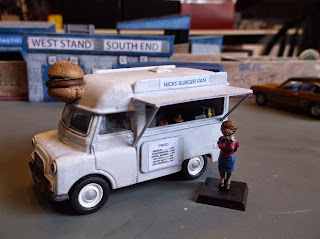 The Burger Van is actually an integral part of the Aggro rules, so I made this one out of an old ice cream van I had lying about. It's full of finely detailed burgers, hot dogs and cans and stuff, which can't really be seen, but I know they're there. 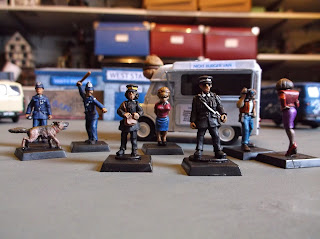 These are the 'Special Event' personalities. I didn't have a streaker, but this being the seventies I thought a bird with big knockers would work just as well. And I made my own event, the TV crew, with the simple rule, any Cred won within 8" is doubled. 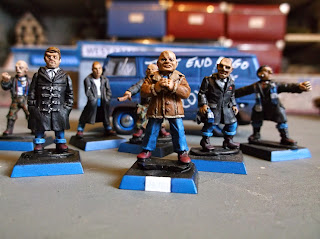 Here are my Gas Guvnor and his Geezers, I was wondering how to differentiate between Lads and Geezers, etc. In the end I went for painting the bases, which isn't very satisfactory, or versatile, but hey. I also painted up the 'Tote End Argo' to give them a van (not that the van actually needs to be modeled under the rules). 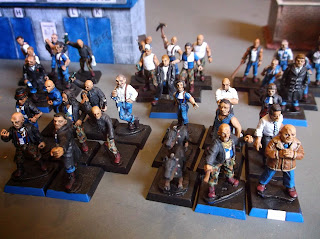 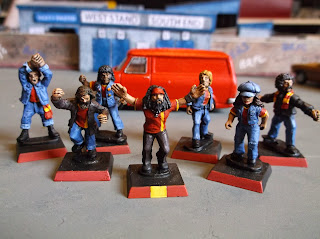 The Melchester Headhunters pretty much mirrored the Hit Squad, with 6 Geezers. 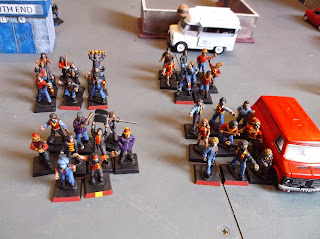 For these guys we went for bigger groups using a 9,9,9,8 formation. I was thinking they'd be a bit less manoeuvrable than using 5 crews, but weight of numbers would probably give them an advantage. 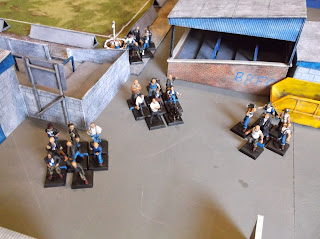 We used the Turf War scenario, except we used diagonally opposite set-up zones, instead of table edges, simply so we could make the stadium one of the objectives. 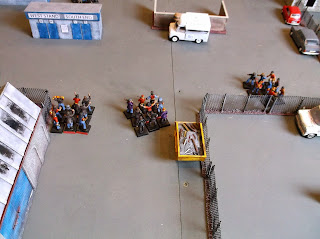 The second objective, we used Dave's van. Not sure why the Gas Hit Squad are so keen to take a Ford Transit.  Each firm has a van load off the table, which should arrive some time during the first four turns. 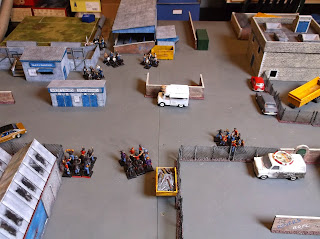 Things are getting a bit nawty. You can tell it's gonna kick off.

Posted by Monkeylite at 14:26 No comments:

I can type it, but I can't say it: Mutatawwi'a. So, I am going to do this warband for Saga. These guys are cool, partly coz they're v easy to paint, and partly because, to paraphrase the apocryphal words of the Duke of Wellington, 'I don't know what effect these men will have on the enemy, but they make me shit myself.' 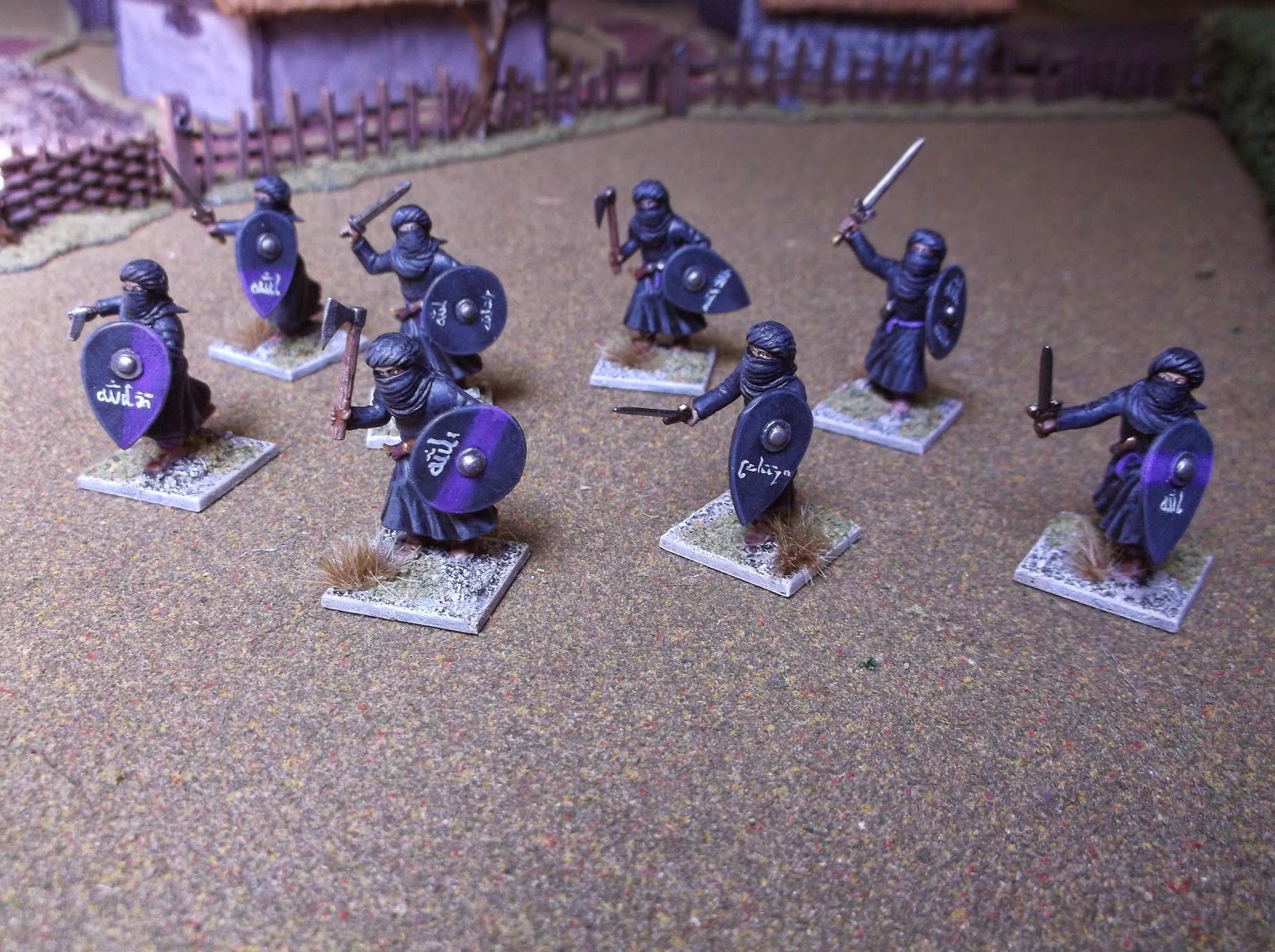 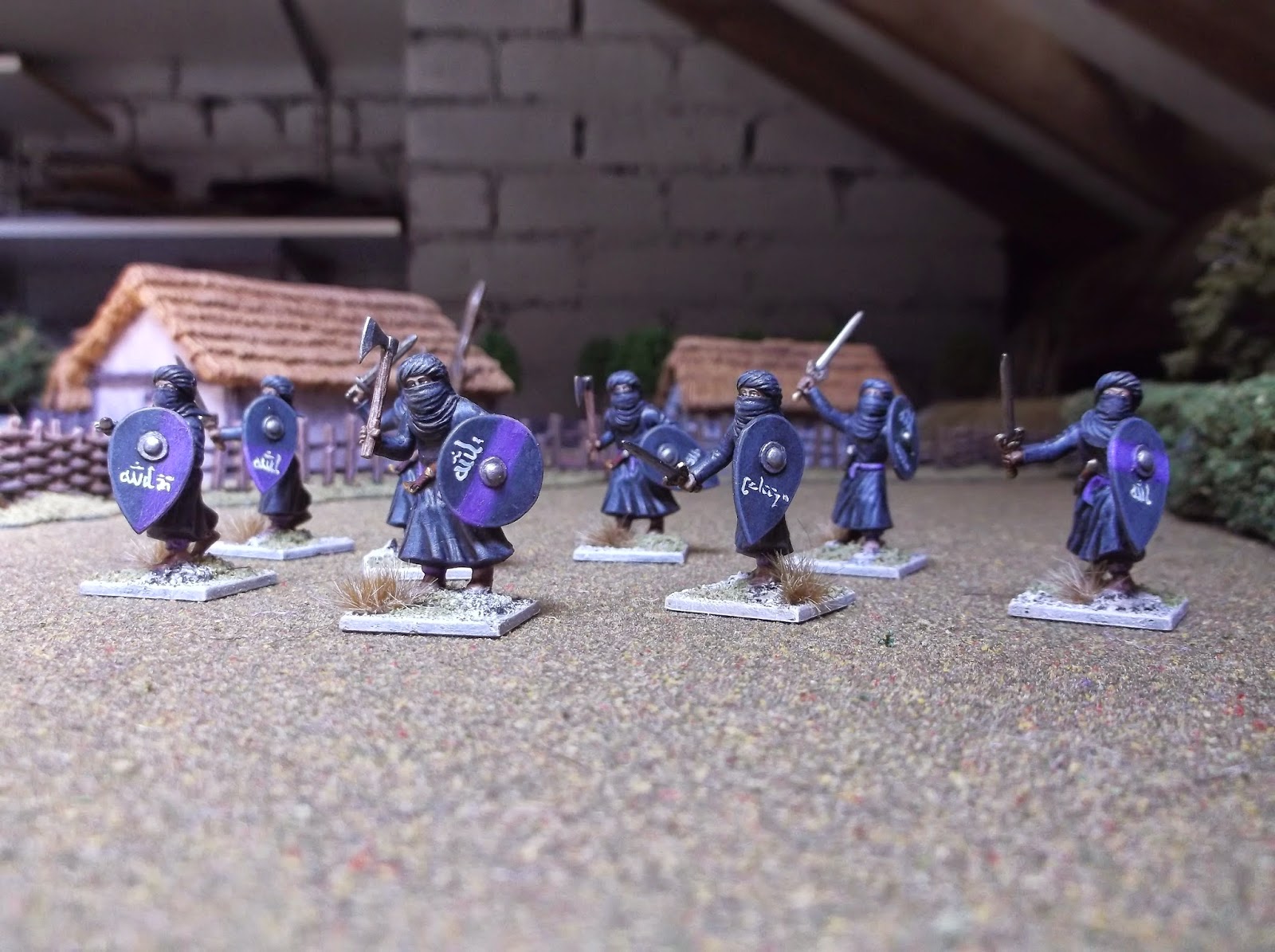 Posted by Monkeylite at 06:01 No comments: